Photos > Kytherian Art > Aphrodite and the Gods of Love at Museum of Fine Arts, Boston

Aphrodite and the Gods of Love at Museum of Fine Arts, Boston 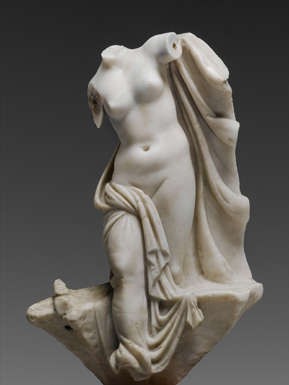 Statuette of Aphrodite emerging from the sea, Greek or Roman, Eastern Mediterranean, Hellenistic or Imperial Period, first century BC or first century

Other sculptures and paintings:

BOSTON — At the entrance of the exhibition, the marble head of Aphrodite floats in the air, as the black metal bar that secures it to its pedestal disappears against the dark wall behind it. Separated from its body centuries earlier, this is all that remains of the once life-sized statue of the beguiling Greek goddess of love and beauty. Her pensive, almond-shaped eyes gaze outwards at her spectators as they enter the latest Museum of Fine Arts, Boston, exhibition, “Aphrodite and the Gods of Love,” and her full lips turn slightly upwards in a mysterious smirk. It is an inexplicable expression akin to the infamous smile of the “Mona Lisa.” Yet unlike da Vinci’s femme fatale, Aphrodite holds no secrets, bearing all before her spectators in the impressive collection of nudes that follows.

The show is a collection of 160 pieces drawn largely from the MFA’s permanent collection, a testament to the institution’s impressive holdings of Greek and Roman artwork. Frequent visitors to the MFA will not be disappointed by this compilation of familiar works, as the pieces have been taken from their original locations in the Greek and Roman gallery and arranged in a masterful narrative that breathes new life into them. It is the first museum exhibition devoted solely to Aphrodite and her realm, and it celebrates her transition from an unknowable, ethereal being into an anthropomorphic divinity who “has taken human shape through [the work of] the artist,” to use the words of Christine Kondoleon, MFA Boston’s senior curator of Greek and Roman art.

The collection of life-sized nude sculptures in the center of the exhibition shows the way in which artists placed an increasing emphasis on the human nature of Aphrodite over time. In earlier works, Aphrodite is depicted wearing flowing robes, which allude to her human body but do not fully disclose it, preserving some of the mysterious nature of her divine character. In the mid-4th century BC, however, Aphrodite was represented completely in the nude for the first time. This was a watershed moment in art history: she was the first female nude in Western art, and she became the standard upon which later masters — Titian, Ingres, and Renoir, to name just a few — based their own representations of the idealized female form upon. Her depiction in the buff also represents a further breakdown of the barrier between Aphrodite’s human nature and her divine one.

The exhibition continues to make evident Aphrodite’s human characteristics through an exploration of her complex and oftentimes contradictory mythology. Her role as the goddess of love and marriage is demonstrated in such works as “The Judgment of Paris,” a rare fresco piece on loan from the Museo Archeologico Nazinoale di Napoli. The piece depicts Paris, the Prince of Troy, selecting Aphrodite as the most beautiful of all the goddesses, for which Aphrodite rewards him with marriage to the most beautiful woman in the world, Helen.

Yet the exhibition also highlights Aphrodite’s reputation as a notorious adulterous that engaged in many illicit love affairs while married to Hephaestus, the god of the forge. This aspect of her character is explored in a section devoted to her children, both legitimate and illegitimate, including Eros, the winged god of desire better known by his Roman name, Cupid. A number of objects depict him in the very human acts of a naughty boy, such as the “Mirror of Aphrodite and Eros,” which shows a dynamic image of him bent over his mother’s knee while she spanks him — a very human moment indeed.

Despite this exploration of the earthly qualities of Aphrodite and the other gods of love, the exhibition shows that the ancient people of Greece and Rome worshiped these divinities very seriously, and looked to them for guidance and protection in matters of love, lust, and marriage. Their importance to their followers is evident by the sheer number and diversity of objects featuring their likeness. Through the depth and breadth of this exploration of Aphrodite and her realm, it is possible to touch the ancient world, however briefly, before exiting the exhibition and returning to the busy streets of modern Boston.