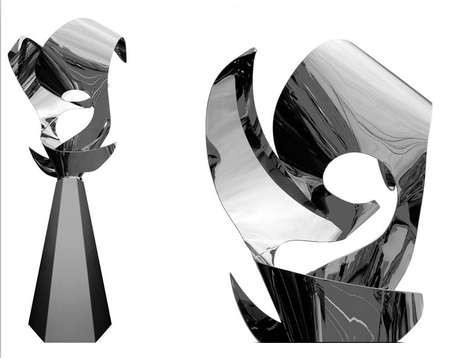 CM: The Open Mind of Lafcadio Hearn by Masaaki Noda represents the open double course of communication in the discourse between the West and the East. Having been born on Lefkada island of Greece to surgeon-major Charles Hearn from Ireland and Rosa Antoniou Kassimati from Kythera island, receiving the lessons of the Anglo-Saxon education, learning the work ethic of America, and choosing to adopt Japan as his country, Lafcadio Hearn (1850-1904) became the epitomy of a personality bridging complimentary cultures. Lafcadio is something like a cultural compass embodying the world's four cardinal points: the south with Greece; the north with the United Kingdom; the west with America; and the east with Japan. The Open Mind of Lafcadio Hearn reflects the idea of global communication throughout space and time.

The hollow of a 'fiery' metallic duct that is reminiscent of the Möbius Strip, seamless through its reflective surfaces, represents the open mind that is required of the human to arrive at a state of good health, balance, harmony, love, and euphoria. Lafcadio is the supreme embodiment of the achievement of the Open Mind. His example teaches the fact there is no higher calling than tolerating 'otherness', and no richer way of life than one spent pursuing the creative truth, no greater responsibility than holding a mirror up to society, no greater challenge or mystery than marrying our dream life to our waking life. In opening his mind Lafcadio found peace in himself and opened his heart to humanity.

Noda's The Open Mind of Lafcadio Hearn was unveiled at The American College of Greece in 2009 on the occasion of celebrating the 110th Anniversary of Friendship between Greece and Japan in honor of a man the West and the East join to commemorate.