All donations are fully tax- deductible. 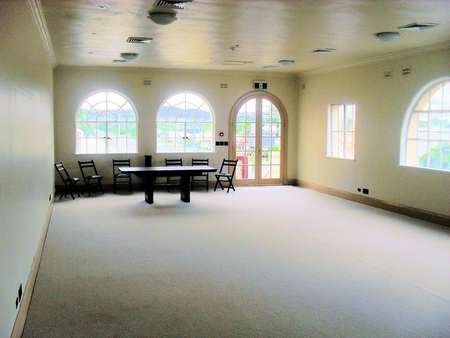 Photograph: The Main Conference Room, one of five rooms in the Roxy Museum, situated above the Roxy Cafe, in the Roxy 'complex'.

In the 5th-6th April 2014, the Greek Roxy Museum was opened, completing the Roxy masterpiece.

View / Download a copy of the article outlining this accomplishment as a .pdf:

The Roxy Greek Museum requires further donations to help preserve and maintain it.

The Roxy Complex, Bingara. Preserving an important part of the Greek-Australian heritage….forever

The first Greeks ‘migrated’ to Australia in 1817 and the first Kytherian migrated to Australia in 1854. Greeks and Kytherians came to Australia in considerable numbers from the 1850’s onwards, and by 1900 had established themselves very well, through what historian Hugh Gilchrist called, ‘the shop-keeping phenomenon”. They gravitated to owning cafes, restaurants, oyster saloons, fish shops, milk bars, and cinemas. As clearly evidenced in the book Life in Australia, by 1916, Greek-Australians had become well established citizens of Australia. By that date many had accumulated substantial wealth.

In 1922, the Kytherian Association of Australia - then called the Kytherian Brotherhood - was inaugurated at a meeting in the Marathon Café in the Sydney CBD. Since then it has worked tirelessly to promote Greek and Kytherian culture and has successfully inspired generations of Kytherian-Australians to appreciate the heritage of their parents and grandparents.

In 1936 three prominent Kytherian businessmen, Peter John Feros, George Ernest Psaltis and Emanuel Aroney, built a magnificent art deco cinema, the Roxy Theatre. Adjoining it they also built a well furnished café, The Roxy Café, and behind both buildings the partners also built a large guest house. For various reasons, the venture was not an economic success, but these magnificent buildings remained intact. This Greek-Australian narrative has been brilliantly explicated by a grandson of Peter Feros, Peter Prineas, in his brilliant book, Katsehamos and the Great Idea.

In 1999, the then Bingara Shire Council – now Gwydir Shire Council - purchased The Roxy ‘complex’ including the Theatre. From 1999 to 2011, with assistance from various tiers of government, Gwydir Shire has restored the Roxy to its original splendour. The ‘complex’ now features a fully restored and integrated cinema, café and information centre on the ground floor, and a Roxy Conference Centre and Museum on the first floor.

There are several cafes of Greek origin that continue to operate in regional Australia today, however, they have become a threatened species. Greek café’s and cinema’s, and the buildings in which they were housed, are closed down, or, worse still, pulled down, on a regular basis. There is nothing unusual about the closure of another of these significant cafes that remain in private ownership. There is something quite extraordinary however, about one being brought back to life, and being able to guarantee its existence well into the future.

Many Greek-Australians have watched the development of the Roxy complex, Bingara, with extraordinary pride. They regard The Roxy complex as a Hellenic and Kytherian sacred site, and pilgrimage site. It is also a living and working memorial, honouring the Greek contribution to Australian history and culture.

In the process, the development of the Roxy complex has had many positive ramifications:

It has, established an “adaptive re-use” for a magnificent theatre which was closed for decades. This has created “social and cultural capital’ for the town of Bingara and the municipality of Gwydir that has given new ‘life blood’ to the region. The Roxy and its Greek aspect, has created a unique focus and feature for the region. Through training in the theatre and dramatic arts, the Roxy has provided the youth of the region, vocational skills they would otherwise have to travel a long way to experience. A TAFE hospitality kitchen and training rooms are currently being built at the rear of the Roxy café. Upon completion this will provide further vocational skills for youth in the region.

Additionally, the development of the Roxy complex has created a new and lasting bond between Greeks and Australians, particularly in rural Australia, which has strengthened the positive and productive relationship built up over more than a century of social interaction.

Of course, if the Greek Museum was located in Sydney, Newcastle, Brisbane, or the Gold Coast, more Australians would have easier access to it. Attempts have been made over many decades to open a museum of this type in Sydney, but to no avail. Now it is too late. To purchase the real estate alone to create a ‘complex’ as large as the Roxy in Sydney would cost at least $30 million. The prospect of those funds materialising is almost zero. The best course of action for Greek-Australians is to take advantage of what has been built in Bingara, and to make the pilgrimage there. As with all pilgrimages it’s ‘the journey’ which helps to make experience even more worthwhile.

In 2010 the Commonwealth Government of Australia provided $750,000 to convert an existing Chinese restaurant to a Greek café. Above this café a conference room and four other rooms were refurbished, to house the Roxy Museum - which is a Greek Museum. Its charter is to focus on Greek settlement in rural Australia'. The Roxy Museum is devoted to preserving and explaining the Greek contribution to Australian society. The museum will tell the stories of all Greek settlers in the rural Australia, including people from the island of Kythera." It will focus not only on the “shop-keeping phenomenon”, but on all aspects of the Greek migration experience in Australia. This is an important cultural initiative for the whole Australian-Greek community, and must elicit the Greek community’s unmitigated support.

The Roxy is a living and functioning monument to a Greek-Australian shared history, one that has benefited both cultures. Paul Kalokerinos has summed it up well: “We Greek migrants are all grateful to have the life we’ve had in Australia, but we have worked hard, and contributed a lot to the country’s development”. The café and cinema culture, in which Greeks and Kytherians had a deep involvement, has had a profound influence on mainstream Australian culture. Little wonder that the Foxtel documentary that screened on the Bio Channel in June of 2010, featuring the well-known actor John Wood celebrating The Roxy, was entitled “As Australian As.” And that in 2011, on the occasion of the 75th Anniversary of the Roxy, ABC’s Landline program dedicated so much time to the event.

In his PhD thesis on the shared history, Kevin Cork advised us that: "If we are to remember these Greeks for their contributions to Australia's social, architectural and technological advancement, then it is imperative that there be Greek landmarks which are acknowledged at local and state level - ones that point to the achievements of the Greek-Australian cinema exhibitors…We cannot allow their histories to be forgotten, not when they provided services that positively affected millions of people, firstly, through their refreshment rooms and, secondly, through their picture theatres."

The Roxy’s Greek Museum. Now its time for a significant Greek-Australian contribution.

Anglo-Australian’s, through various tiers of government, have spent about $3 million to establish a very significant Hellenic memorial. Their contribution has created what Kevin Cork called, “a Parthenon down under”. Greek Australians have been “blessed” to have this Hellenic ‘sacred site’ restored to its original pristine condition. So much money has been ‘invested’ in its restoration and expansion that its longevity is guaranteed for at least a century. Most other Greek Australian buildings and enterprises in private hands will have been long gone by the year 3000. The Roxy complex will still be standing.

It is now extremely important that the Roxy Museum, conference centre and surrounding areas within The Roxy complex, be set up to the highest possible standards. It is imperative to make a substantial start to this significant project that ensures that the site becomes an icon, and a tourist attraction, for generations to come.

The recently announced $94,500 State Government grant to the Roxy Museum through the State Government of NSW & Arts NSW, is very welcome, and will greatly assist in the development of the Museum.

As generous as this funding has been, additional funding is required. To furnish, complete, and maintain the Museum, ongoing sponsorship and support from the community, especially the Greek community, is required. Anglo-Australians have performed above and beyond the call of duty. It is now time for a wide range of institutions, associations and individuals within the Greek community to contribute to creating a vibrant and viable Greek Museum, centred on the Roxy ‘complex’. Substantial additional funding is needed.

In an effort to create a source of on-going funding, the Roxy Museum Committee will create a migrants ‘Welcome Wall’. Greek migrants, their children and grandchildren can place the name, place of origin, and other details of migrants on the wall, as an on-going memorial, to their enterprise, contribution and achievement. Give serious consideration to placing a parents, relatives, or ancestors name on that wall.

Greek-Australians can also help by contributing café and cinema memorabilia, books, and other ‘realia’ to the Museum. Has realia of this kind been stored in a garage or attic in your home, for years, appreciated by no one? Are you about to throw out realia of this kind? Wouldn’t it be far better off in an archive and a museum, where it could be displayed, and impart a great deal of pleasure and knowledge to a wide variety of Australians? Think seriously about donating realia of this kind to the Roxy museum.

All donations are fully tax- deductible.

Katsehamos and the Great Idea, the Book