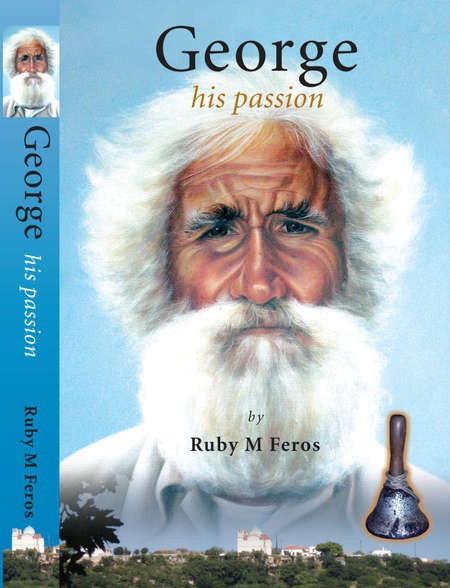 (Up to three copies can be posted at the same time for the same cost of postage.)

You can also purchase the book by sending payment to:

George his passion. An Overview

Kytherians are proud. They are proud of their race, and their achievements.

One Kytherian of whom we should all be proud, is the late George Feros.

George, a ‘loveable eccentric’, was a humble man. He lived most of his seventy-eight years in Byron Bay. The story of George’s exploits has been recorded in a book, George his Passion, written by his daughter, Ruby. He was proud to be a Kytherian-Australian.
George was born in Mitata in 1902. He immigrated to Australia when he was twenty, and like a lot of Kytherians of his generation, he never returned to the ‘old country’ as he called it. George told me he was a stow-a-way on a fishing trawler on his way from Athens to Port Said.

Ruby M Feros (also known as Ruby M Brown) has chosen to write under her Kytherian birth name. Ruby is an accomplished author having written her first book in 1983. Since then she has written on a variety of food related topics. Ruby likens George his Passion to a doctoral thesis. It took her five years to research and write the book. Ruby said she hadn’t written for a year when her friend challenged her to write more. Once she took up the challenge to tell George’s story, she fell in love with his passion, and began to write about him, rather than simply relate his exploits.

In the foreword to George his Passion, Nick Towers wrote, “George Feros, like the lighthouse, was hard to miss in Byron Bay. When I arrived from the U K in the late 1960s, they both shone very different beacons. One was an elegant white fixture on the Cape, the other a selfless beacon of charity, manifested as a very strange man, with his bell and moneybox. First impressions – a beggar collecting for himself to buy shoes and clothing. On a closer inspection it was clear that the writing on the moneybox said he was collecting for a nursing home. When in 1968 I asked him where in fact the nursing home was, he replied it was still a dream and with the help of God it would get built. I will always remember those piercing eyes that went straight through me. I instantly knew that he was genuine. I also knew that there was no sidestepping his moneybox, without possible detriment to my very own soul. Thankfully the dollar was still in note form and not really expected to be poked through the small slit in the moneybox. Everybody gave a coin, some only a few cents. I was one of the latter”.

Ruby asserts in the opening chapter of her book that if this story of George his Passion had not been written, a grave injustice would have occurred, and the history of Australia would have been all the poorer. It would have been poorer in more ways than one. George was on a mission to raise money for aged care in his local area of Byron Bay on the far north coast of NSW. In the early 1970s there were no aged care facilities in Byron Bay and George set out single-handedly to raise funds to ensure that one was built.

Ruby believes that most Kytherians have a project or a mission. George was a man with a mission. His only mission was to raise money for aged care. How George set about doing this is the story of her book. Convention was not part of George’s way of life. The reader will be able to learn some of the unusual methods George employed to raise the necessary funds.

Ruby had tried for about two years to find someone who would publish her book about her father. She met a man called Geoff, through her friend Lorraine. Sadly Geoff’s body succumbed to the ravages of cancer. Ruby believes that when one door closes, another opens. Another door opened for Ruby when she met George C Poulos through the Kytheraismos Conference in Canberra, on 16 September 2006.

George C Poulos is a Kytherian who also is proud of his heritage. He too is passionate to see works published about notable Kytherians. Ruby says her book would never have been published without George C Poulos and his driving force and enthusiasm.

To learn about how George Feros lived his life, you will need to read George his Passion. Ruby is donating the profits of her book to Feros Care, the aged care facility that her father raised funds for. She said that by purchasing a copy of the book, you will be in some small way contributing to the ongoing work her father pioneered. Ruby said that when she was writing her book, her friend Lorraine said to her she had hoped the book would do well, and would be financially beneficial to Ruby in her retirement. Ruby explained to Lorraine how she wanted George’s dream to stay alive and said she was writing the book in that hope. She knew George would not have approved of it any other way.

When Ruby spoke about the work of her father at the Kytheraismos Conference, she challenged all Kytherians to be proud of their heritage and to keep the dream alive.

George’s story is about one man’s passion to do great things for the citizens of Australia. Ruby says writing her book has become one of her passions. If you have a passion for what you are doing the enjoyment is multiplied.

Feros Care Ltd started out as a small acorn. When you plant an acorn, as George did, you don’t know how big the oak will grow. The final size doesn’t matter; the acorn has to be planted first. You don’t have to be great to start, but you have to start to be great. It is interesting that the first two letters of the word goal are GO. Some people just dream of worthy accomplishments, others wake up and do them. George tirelessly worked to see his acorn grow into a big tree. Feros Care now provides a range of aged care services. From the efforts of one man, grew a large not-for-profit organization that helps to care for people in their senior years.

George his Passion is a must for your reading list, and for your library. Again, to purchase the book,

Remember by purchasing this book you are keeping the Kytherian dream alive and helping a worthwhile charity.