Culture > Bibliography > The Greeks in Queensland

The Greeks in Queensland 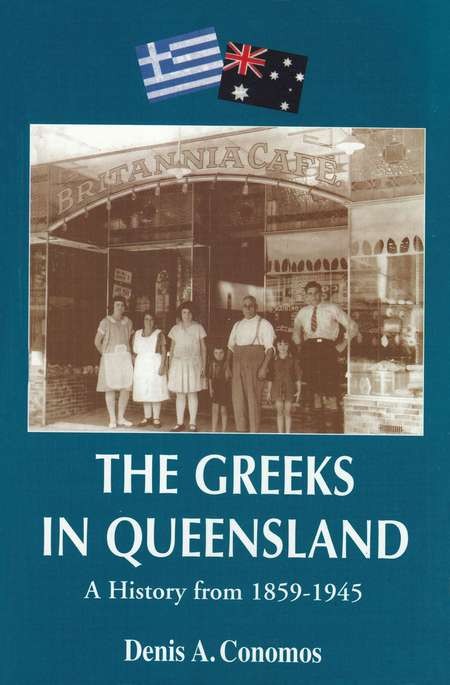 or, visit us at 8th Floor
371 Queen Street
Brisbane

IN BRIEF: A detailed history of the Greeks in Queensland from the beginning of Statehood in 1859 to the end of the Second World War.

This deals with the life in Greece, departure, voyage, arrival and experiences in Australia of the Greek migrants who settled in Queensland prior to 1946.

Sales for delivery within Australia

Sales for delivery to countries other than Australia

Add US$19.00 for Overseas airmail delivery.

Source material used by the author includes:
· the stories told to him by 250 pioneer migrants who arrived in Queensland prior to 1946
· contemporary articles and reports that appeared in Greek-Australian newspapers
· Naturalisation records
· a scrap album kept by the Greek Consul, Christy Freeleagus, and kindly made available by his family
· Minute books of the Brisbane and Innisfail Greek Communities and much other documentary evidence.
The interviews with the pioneer migrants took place from 1980 to 1983. Almost all of them have since passed away. Hence, much of the material contained in the book is not available anywhere else and is therefore of immense historical importance.
The migrants who told their stories came from all parts of Greater Greece - Kythera, Asia Minor, Ithaki,
Athens, Castellorizo, Cyprus, Crete, Rhodes, Samos, Peloponnesos, Epirus and elsewhere.
In this book, the reader meets many of the leading figures of the Greek Community in Queensland and some in New South Wales who helped to shape the life of the Greeks in those states. The reader also meets some colourful Greek characters who settled in Queensland in the 19th century.
The publication of the book is a non-profit venture. Any monies left over after payment of expenses will be donated to a Greek society for the conduct of ongoing research into the history of the Greeks in Queensland.


Denis Arthur Conomos of Moorooka, Brisbane, is a retired Uniting Church Minister and former solicitor.
He is married to Jenny, and they have a daughter, Heather.
Denis' father, Anargeros Megaloconomos, (Arthur Conomos) came to Australia from Kapsali, Kythera, in 1912. He returned to Kythera in 1929, married Elenie Varipatis (Helen) from the same village, and came back to Australia in 1930.
Denis, his two brothers and two sisters were all born in Queensland and grew up in Toowoomba.
This book is the culmination of over twenty years' research.

Among the many topics covered in the book are:
· The Census of the Australian Greeks taken in 1916 as a prelude to having them interned as enemy aliens in the event of Greece entering the First World War on the side of the Germans
· Eye-witness accounts of the Asia-Minor Catastrophe of 1922
· The phenomenal growth of the Greek cafe industry which made the Greek cafe a social institution in the period from the 1920s to the 1940s and beyond
· How that growth began with the early Greek cafes in Sydney and country towns of New South Wales and, from the turn of the 20th century, began to spread to Queensland
· How it reached the point in the 1920s and 1930s when there was hardly a town of more than a few hundred people in Queensland that did not have at least one Greek cafe
· The entry of hundreds of Greeks into the sugar industry, with many stories told by cane cutters and cane farmers
· The infamous Ferry Commission of Inquiry into the Sugar Industry of 1925 that issued a racist report maligning the Greeks as a race
· The entry by many Greeks, mainly Rhodian, into the cotton industry at Biloela/Thangool in the 1930s
· The growth and development of the Greek Communities in Queensland

· The Split that divided the Greek Community in Brisbane from 1926 to 1934, its causes and repercussions and how it was finally resolved
· The withdrawal of a splinter group from the Church that gave rise to the Greek Evangelical Church in the 1930s
· How proxenia (arranged marriage) was practised in Queensland in the pre-1946 period
· The setting up of the first Greek schools and the attempts made to inculcate the younger generation with Greek culture
· How the rising younger generation began to assert themselves as Greek-Australians with their own particular needs, leading to the formation of the Hellenic Youth Club
· The theatrical performances staged in the pre-1946 period
· The Greeks who excelled in the arts and in sport
· The service of Queensland Greeks in the Second World War
· The cafe boom that resulted from the presence of huge numbers of Australian and American servicemen throughout the state during the Second World War
· The Greek Days held in 1941 to raise money for the Greek War Effort


The Greeks have always been a migratory people. As early as 750 BC, Greek colonists were settling in Southern Italy. A little over four centuries later, Greek colonies were established throughout the Middle East and Asia, in the wake of Alexander the Great's conquests. In more recent times, there have been successive waves of migration to Asia Minor, Egypt, the United States, Australia, and in the post-World War II period, to Western Europe.

Migration has not come easily to the Greeks. They are passionately fond of their country and proud of its ancient traditions, but they have often been driven to migrate because of the poverty of their land. Much of mainland Greece is arid and deficient in natural resources, barely producing enough to feed its people. Added to poverty as a spur to migration has been the political instability of the Balkan region, not to mention the whole of Europe, which, in the first half of the 20th century, resulted in Greece often being involved in war. As a result, Greeks have left in their thousands to seek greater prosperity and a more peaceful life elsewhere.

It was not surprising that when Greeks sought a more prosperous life elsewhere, their thoughts should often go to regions close to Greece, where there were opportunities for material advancement not present at home. Villagers living a life of bare subsistence back home could find employment in Asia Minor and Egypt, without having to depart too far from home. The more adventurous and ambitious cast their eyes upon more distant lands. They were hearing tales of the great riches that were to be found in the New World, and in particular, the United States of America. And so Greek refugees from poverty and war began to join that great movement of peoples from every part of Europe who, in the latter part of the 19th century and the early part of the 20th century, began to pour into the country which they saw as a haven of progress and peace.

The rate of Greek migration to Australia escalated after the First World War and the disastrous Graeco-Turkish War. After the latter, mainland Greece suddenly found itself having to absorb over a million Greek refugees who had fled Asia Minor, and the country was in desperate straits. Thousands of Greeks began to leave to escape the wars and the poverty. Up to 1924, most of them were choosing the United States as their destination. The situation changed dramatically when, in that year, America, seeking to put the brakes on the flood of European migration that was threatening to get out of control, imposed severe limits on immigration. From then on, Greek migration to Australia underwent a steep increase - an increase that was only temporarily halted by the Second World War, and then resumed with even greater intensity in that remarkable migration of European peoples to this country in the 1950s and 1960s.

This history focuses on the Greeks who settled in Queensland from the beginning of statehood (1859) to 1945. As there was no migration during the Second World War, the history deals in effect with Greeks who migrated to Australia prior to the end of 1939. For the sake of completeness, the first chapter gives a brief account of Greek settlement in Queensland in the 19th century, making liberal use of material from Hugh Gilchrist's book, Australians and Greeks, Volume 1 - The Early Years, Halstead Press, Sydney, 1992. The rest of the book is based mainly on material gathered by the writer in interviews that he conducted in the period 1980-1983 with 250 pioneer Greek migrants who had come to these shores from 1900 to 1939, minutes of Greek associations, and pre-1946 Greek-Australian newspapers.

The book describes the home background of the migrants, the reasons for migrating, the voyage over, and their experiences when they arrived in Australia. It traces the evolution of the Greek communities of Queensland from the isolated settlers in the 19th century to the vibrant and organised communities of the 1930s and 1940s. It describes how the Greek cafe industry grew from its small beginnings in the first decade to the dominant position it occupied in the industry from the 1930s. It examines the important social role played by the Greek cafe, particularly in the country towns. It explains why hundreds of Greek men entered the sugar industry from the 1920s, and describes the harsh conditions under which they worked and the discrimination they sometimes faced. It deals with the impact made by the first arrival in large numbers of Greek women in the 1920s, the subsequent growth of Greek family life and the determined attempts made by the parents to pass on their Greek culture to their children. It describes the serious decline in Greek business and employment caused by the Great Depression, and the gradual recovery from that decline - a recovery given considerable impetus by the commencement of the Second World War. It refers to the migrants' varying accounts of their relations with the Anglo-Celtic Australians.

This is the story of a people who came to stay a few years, earn wealth and return to their beloved homeland, but who, because of a number of exigencies, remained. Having decided to remain, they tried to transplant the life they knew in the villages back home in Australia. Though they could not have completely succeeded in achieving that goal, they managed to build vibrant communities which helped to preserve much of their Greek culture. At the same time, those same communities were ready to absorb the huge influx of migrants that reached these shores in the immediate post-war period.

All this was no mean achievement for migrants who, with few exceptions, had had little education before they came. And despite the hardships they had encountered, the bulk of those interviewed by the writer were able to testify that they were glad they had come to Australia.