Well Kythera’s topical Boat Syndrome (the boat’s on/off and lack of available timetables) has come to a crashing halt on the rocks off the island opposite Diakofti. Yes indeed folks, the rust- bucket optimistically named the Mirtidiotissa (Kythera’s most famous icon) has a smallish gash on its underbelly as observed by professional divers and tempers are flaring as shop proprietors and hoteliers alike amass at Diakofti’s port to protest the acute failings of the ANEK shipping line which have economically crippled the island.

Village whispers are that this may have been a deliberate action as the new ship the Porfyrousa passed inspection by the Ministry for Maritime yesterday and was signed-off ready to sail immediately. Mirtidiotissa passengers also allege that earlier in the day, while arriving from Gytheio they thought the Ship appeared to be headed straight for the rocks. On its next route from Neapolis, bingo, coincide or fate…….only the beloved Mirtiodissa and several ANEK employees know.

Like most of the locals I too have taken a summer job (8 weeks) at the Active Car-Rental agency. We hire cars, scooters and bicycles, for more info log onto www.activerent.gr. Kythera has now entered what we in the car rental industry refer to as the peak tourist season (July 20-August 20). This period is also cynically known as Cash & Carry, when demand to visit the island exceeds the supply of almost everything associated with a carefree Greek Island holiday, lack of flight & shipping availability, accommodation, water, public transport, in fact the only resource available on tap is the blazing sun (which is all well and good if you’re a member of the reptile family). And as any Kytherian will tell you, when demand exceeds supply the result is profit.

The peak tourist season has been very slow, much like Kythera was perhaps 30 years ago when I was a teenager and there were no rooms and Scandinavian pack-backers would pitch their tents and sunbake topless to the chargrin of the local elders. The island received a boost when the Australian school holiday contingent flooded family villages and seaside hotels. But those days are over and things are slow and now that the Mirtidiotissa has a grazed belly if you don’t get here by plane…….you better wear your floaties!!!

It’s been just too Damn Hot!!! since June. My eyeballs have been sweating profusely and those true-blood Kytherians with runaway nasal and ear-hairs looked like they had a head on with a GHD (hair-straightener). Let’s just say it was not pretty. Slipping hourly into the Kytherian waters (sea, creeks, waterfalls and/or showers)was the only escape from the intense debilitating heatwaves of the past six weeks. For science-freaks looking for that less than elusive dirty big hole-in-the-ozone layer- look no further than above Kythera…..seriously. You know it is hot when the funkiest summer fashion accessory is the wicker cowboy hat worn by everyone from 15 to 90.

July has given me the truest dose of what it is essentially to be Kytherian – a child of the diaspora. My brother Brett and his tribe arrived for a 3 week summer holiday via Paris and Crete. Part Brady Bunch and part Munster family (70’s tv reference), days were spent on the beaches,
lunching at outdoor taverns with much late evening ice-cream consumed by all. In the year I have been absent from Australia my nieces grew and grew. We got to do some cool stuff together including sleeping on the verandah under the stars.

I have just survived the emotional roller-coaster of arrival/departures that resonate from every ancient batzouri (window sshutters), rock-wall and weeping olive tree all over this island. Often on the departure end of saying goodbye to my yia-yia (grandmother), cousins, aunties and uncles, friends, acquaintances, shopkeepers et al, the tears of my niece Elissa reminded of how I felt when leaving, the rip in the fabric of unconditional love.

Saddest story of late is the untimely passing of a young 22 year-old Athenian chef Tassos Makridis who died this morning,. Involved in a motorcycle accident in Agia Pelagia, on Wednesday night and was airlifted in an Greek Army Helicopter at 2am to Athens. Critically injured, Tassos passed over this morning. Imagine coming to Kythera to work and dying. There is an obvious raw pain if you are to walk the along the shops of Pelagia.

Best local success story of late is the deserved triumph of artist (& soul-sista) Daphne Petrohilos’ current exhibition ‘Earth & Water’ at the Zeidoros Cultural Centre in Kapsali. The much-anticipated showing brought together an eclectic mix of well-scrubbed locals, foreign residents and tourists with almost half of the 25 paintings selling on opening night.

There are days when I feel the cosmic joker has been messing with my life and I have been cast in a non-speaking part of a Tragic Opera called TSIRIGO………and then there are large period of same in/same out. Today it’s Opera, tomorrow…………………………………….
PS A major clean-up effort has been undertaken to remove all oil/tar spillage off the rocks of Diakofti. 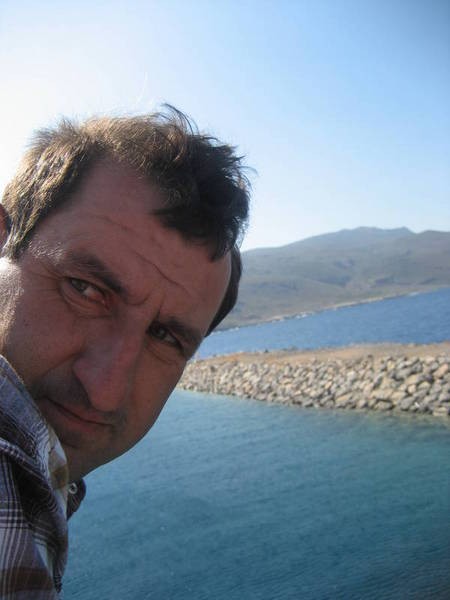