The final 52 weeks in Paradise.

Whenever I would go to Kythera, I would head directly and often from the airport, to Potamos town-square and have a rizogalo (rice pudding) or a fresh-warm galatoboureko (semolina pie) at Rouli’s Kafenion, the centre of the Kytherian universe.

With a razor-sharp ability to comprehend what was happening around him at all times, Theodoros (Rouli) Fardoulis lived-up to his paratsoukli (nickname) of Alepou (Fox). A gentle man, with piercing blue eyes and a deep chuckle, for many people both local and of the Diaspora, Rouli was the key to village life.

Born in 1926 to Vasiliki and Konstantinos Fardoulis, Rouli was the second of five children. Growing up in the remote and rugged but spectacular Vithoula (between Potamos and Agia Pelagia), Rouli’s serenity was visible when walking in the fields. Not one to shirk away from hard work and although he became a pastry chef, he always remained a man of the land who had perivolia (gardens) and would pick olives each year.

A direct relative of the Fardoulis Chocolate dynasty, Rouli had never visited Australia but was always pleased to meet all travellers, especially if they were from the Kytherian diaspora. He would begin to unravel the visitor’s family tree, leaving you with a deep sense of genuine belonging. He was a surrogate papou (grandfather) to generations. It was as if he had been entrusted by hundreds of his beloved customers ,who had long passed away, to welcome their offspring to Tsirigo.

Originally based in Agia Pelagia, Rouli ran a general store and was a fishmonger, when Agia Pelagia was just a fishing hamlet. Theodoros married Hariklea Kaponas and had three daughters, Eleni, Vasso, Antiopi. and they bought the Kafenion in Potamos, at the beginning of Greece’s post Civil-War mass migration. He had described how in those times, each greek coffees was patiently brewed on a sandbed of coals and the water was drawn from a well in the shop.

In 1992, I began working with Rouli at his legendary kafenion. An astute and patient man, Roulis was the centre of the Kytherian universe. The early morning regulars were rowdy workmen on the way to building jobs. Then from 10am to midday we had the come-to-towners, Dressed in their Sunday best, people who were visiting the Hospital or doing their ‘doulies’ (jobs) would drop in for a handmade glyko(sweet). Sharp as a tack, Rouli would converse with each of these groups remembering with incredible detail who they were, what family group and village they were from, , when he last saw them and when they had last come to town.

The shop phone would constantly ring with questions such as, ‘has the plane landed?’, ‘is the Ship going to dock in Pelagia or Kapsali?’ ‘Is the plumber there?’. And he would politely answer all question put to him. My favourite time of the day, was when the old-timers would come in, after the early morning rush. Rouli would become a rascal and plakes (jibes) would fling from table to table, till they all laughed heartily.

Rouli gracefully nurtured many young people, with even the popular Kythera Summer Edition newspaper being born at the Kipseli (the Beehive) Kafenion. We would often brainstorm ideas and he was an endless source of village stories. In the late 90’s Rouli sold his beloved Kipseli Kafenion in Potamos, semi-retiring to his brand-new Kafenion in Agia Pelagia. He continued to live in Potamos and would commute to Agia Pelagia daily. Always up for a chat, Rouli was an original blend of Kytherian kalosini (goodness) and authentic hara (delight) and village sofia (wisdom).

As I packed up my bags to leave Kythera finally, after 21 years of coming and going to and from the simple pleasures of island life, with my rich experiences pilled high like a pyramid of cards, the fabric of what connected me to this fantastical land began to flutter to the ground. The 20/12/2012 had been a major planetary shift.

Visual landmarks had long gone, old friendships seemed to be erased overnight and the roll call of original and incredible, earth-bound angels had grown and then the ‘Book’ shut firmly closed. Marking more than just a solar storm, the passing of Theodoros (Rouli) Fardoulis signifies as REM sing ‘the end of the world as know it’. 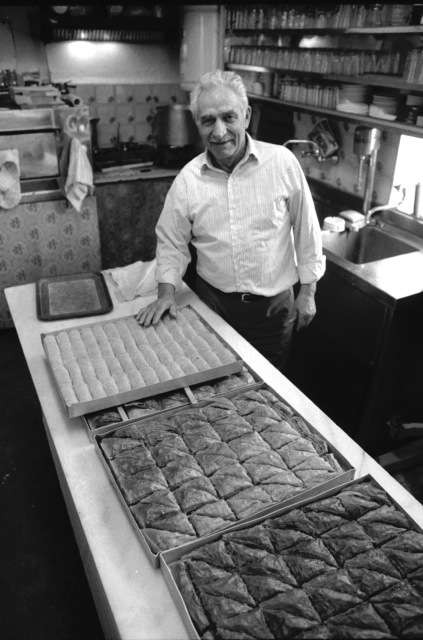 What a beautiful tribute. I'm sorry I never had the chance to meet him.

Thank you Annoula for once again expressing perfectly my thoughts. As you know very well I too worked for Rouli in 1992 and found him to be a gentleman. My best times in Kithira were spent with my over 80's crowd with their stories and jokes. Rouli was number instigator of the koufeta fight at my wedding and made my wedding cake. Kithira for me will not be the same without him as he was the last of my over 80's heroes. His legendary rizogala will be missed and the way he gave you a sense of belonging somewhere.

Anna, What a beautiful tribute . He tuely was one of those Potamos identities! I can't believe he is gone. I saw him on my last day in late September in the platia and he looked and walked better than a younger man. He wished me a happy & safe trip and "kali antamosi tou hronou". How tragic that he will not be around anymore. Sadly Potamos is changing, losing its characters one by one, and that warmth and welcoming nature of the older generation is being lost. May Rouli rest in peace!