$10 million to ESTIA from anonymous donor!

"IF YOU STOP THE TEAR
OF JUST ONE PERSON,
THE HEIGHT OF HUMANITY
IS RAISED".

Photograph: The Estia Foundation of Australia has lodged an application for council approval to commence building a complex that will permanently house ten adults with intellectual and physical disabilities in Gladesville 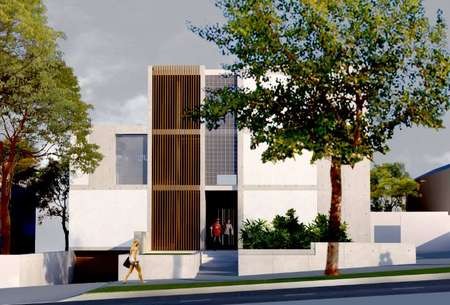 
If there is one initiative that our community has embraced warmly and supports in every possible way, this of course is the ESTIA Foundation of the Archdiocese. An indication of this is the almost unbelievable donation of $10 million from on anonymous great benefactor which was announced ot the official dinner of the Foundation on 27 September, 2013.

People with disabilities are the most vulnerable, but also the most likeable and the most lovable members of our society, which I had the good fortune to discover through the 'Elpida' Association.

When we, the able-bodied cry and carry on for the smallest misfortune in our lives, people with special needs not only do not complain about their difficult situation, but they respond to it with the sweetest smile, with the unspoiled purity with which they were born, and no matter how great their disability, the grandeur of their soul is just as great and they show this with such love towards their fellow human beings.

These people do not ask much from life except for the necessary care and affection which they receive from their families, but also their participation in society, which is encouraged by special organisations that educate them even in the most elementary tasks so that they feel useful an create social relations among themselves.

People with special needs are a great responsibility for their families. Many times when I would go to the meetings of 'Elpida', I would hear the concerns of parents for the future of their children with disabilities, for when they will no longer be able to care for them and protect them. With such concerns, and because the community did not he ‘Elpida' as much as it should have, when their members found themselves in a difficult position, they very correctly requested care for their children from the Archdiocese.

The Church accepted their proposal and on 29 November 1994 the Estia Foundation was established with the blessing of Archbishop Stylianos and the property of 'Elpida'.

ln the beginning the ESTIA Foundation continued the work of 'Elpida’ by caring for young Greek Australians with special needs every weekend. However, it quickly became apparent that their parents or carers also needed respite, when they could choose to leave their child for one or more days in a centre with a family environment.

For this reason the 'St Andrew's House' was built next to the church of St Andrews, Gladesville, through the support of the government of Bob Carr and the Greek community. lt opened its doors on 17 April 1997.

In addition, on 22 October 2000, 'Elpida House' in Roselands commenced operation as a respite centre for parents and carers, with funding from the government following intense lobbying and the generosity of our community.

However the need for permanent care of people with special needs had now become pressing as the parents and carers grew older. The first step was taken with the donation of a building by a family from Cephalonia in 2OO4; this is 'Lixouri House' in Sydney, which permanently cares for four young people with intellectual disability in a pleasant family environment.

The ESTIA Foundation offers its services to disabled people of every ethnicity and creed 24 hours per day every day with five regular beds, and a sixth for emergency cases. ln every home there are permanent cooks to prepare the food, while there are also carers at all times of night and day to serve the residents. ESTIA therefore offers its respite services to 150 families every year.

I should also add that ESTIA offers a programme of care on the weekends which includes activities such as excursions and visits to the sites of Sydney, music and dance, crafts, and various the-rapies, such as hydrotherapy.

The income of ESTIA comes from donations, appeals and government grants which are necessary for its survival.

ln the 19 years of its operation, the ESTIA Foundation has been highly respected by government, , services, organisations families and society in general for its high standard of care and facilities.

The year 2012 was a milestone for the Foundation which successfully achieved two goals. The first goal was the recurrent funding of $1.16 million from the state government of New South Wales for the permanent residence of 10 people with intellectual disability. The second success of ESTIA was the decision of the Supreme Court in favour of the Foundation for a 25,000 m2 property in Blakehurst, rn accordance with the will of Carolyn Milne Williams.

The achievements of ESTIA honour not only the hard-working Father Angelo Alifierakis and his worthy co-workers, but also the Archdiocese and the Greek community in Australia generally. ln my opinion it proves how necessary harmony is within an organisation in order for it to flourish, and how ESTIA, with its professionalism, meets the requirements of disabled people with overflowing love. Lt also makes our Church a pioneer in the provision of such specialised services in Australia.

I imagine that these also were the reasons that convinced the great benefactor to entrust the ESTIA Foundation with the enormous donation of $10 million, knowing that this will make a big difference.

The community in general and above all the families of people with special needs are deeply grateful both to the great benefactor and to ESTIA for its God-pleasing work.

1165:An anonymous Greek Australian donor writes history for the Estia Foundation and the Greek community in Australia $10 million donation for Estia 3 Oct 2013 Neos Kosmos MAJA JOVIC An unprecedented amount of $10 million was donated to Estia Foundation by a single donor, at its fundraising dinner last Friday. In what will stay written in the history of Australia's philanthropic organisations and Greek Australian community as the biggest single donation, a member of Greek Australian community who made a mammoth donation wished to stay anonymous. An initiative of the Greek Orthodox Archdiocese of Australia, the Estia Foundation's CEO Father Angelo Alifierakis, who is responsible for all of Estia's operations and services in caring for children and young adults with disabilities, told Neos Kosmos that in the past, the Estia Foundation has seen donations reach $1 million, but the donation made on last Friday's Biennial Fundraising Dinner at La Montage in Sydney is beyond compare. "This is a unique moment in Australian history. Australian families have donated up to $50 million to hospitals, but the amount that has been donated to Estia on Friday is unrivalled when it comes to charitable organisations like ours, especially community organisations," Father Angelo said. The fact that only from their biennial fundraising dinner last Friday $500,000 was raised proves that the worthy Estia cause entered the hearts of many. Around 1000 guests and supporters of Estia Foundation attended the event, alongside Bishop Seraphim of Apollonias, who represented the president and patron of Estia His Eminence Archbishop Stylianos, NSW premier Barry O' Farrell, the NSW Leader of opposition John Robertson, the Consul General of Greece in Sydney Stavros Kirimis and other government and community representatives. The mammoth donation will help Estia fulfil their long time goals, Father Angelo told Neos Kosmos, to expand and establish two more permanent group homes for young adults with disabilities whose parents or primary carers can no longer care for them. All proceeds from the fundraising dinner will go towards providing direct care to young people with intellectual and/ or physical disabilities, help with building new facilities in Kyle Bay and Gladsville, and maintenance of already established services. "At the beginning of this year, Estia has been awarded a Supreme Court ruling to be granted 25,000 square meters waterfront land in Kyle Bay, on Georges River, following a successful submission in 2011." With the land secured, the Foundation will now be making initial steps to establish respite facilities and group homes on the land for children and young adults with disabilities, Father Angelo said. In addition to this, Estia is due to commence building a complex of 10 apartments, permanently housing 10 young adults in Gladesville. The project is worth $3,5 million. In order for the new project in Gladesville to start, the NSW government $1,16 million in recurrent funding to Estia, that was announced on 1 June, will help. "However, the NSW Government does not cover all expenses to run the quality services which we pride ourselves upon. We rely on the financial generosity of the community to assist in meeting the shortfall. Building of this new, modern complex is due to commence shortly with the architectural design complete and plans submitted to Kogarah Council for approval," Father Angelo said. With the valued support of Greek community members and unprecedented donation of anonymous Estia supporter, young adults with disabilities that Estia cares about will now be given two more permanent group homes, that will provide them with more independency and life they would not have been able to have, if it wasn't for Greek community and Greek Orthodox Archdiocese of Australia.