A great book of the great man Lefkadios Hearn 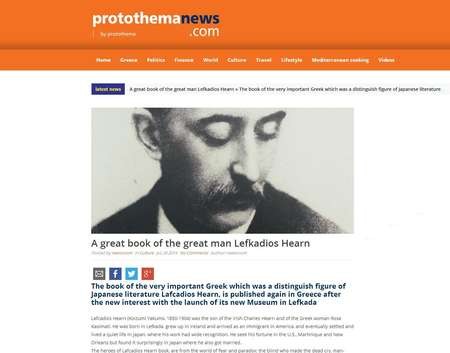 The book of the very important Greek which was a distinguish figure of Japanese literature Lafcadios Hearn, is published again in Greece after the new interest with the launch of its new Museum in Lefkada
Lafcadios Hearn (Koizumi Yakumo, 1850-1904) was the son of the Irish Charles Hearn and of the Greek woman Rosa Kasimati.

He was born in Lefkada, grew up in Ireland and arrived as an immigrant in America, and eventually settled and lived a quiet life in Japan, where his work had wide recognition. He seek his fortune in the U.S., Martinique and New Orleans but found it surprisingly in Japan where he also got married.
The heroes of Lafcadios Hearn book, are from the world of fear and paradox: the blind who made the dead cry, man-shark poured rubies instead of tears, the painting that was losing its colors when separated from its owner, the vampire who had holed up in the depth of water at hand and the Baku ate bad dream.................