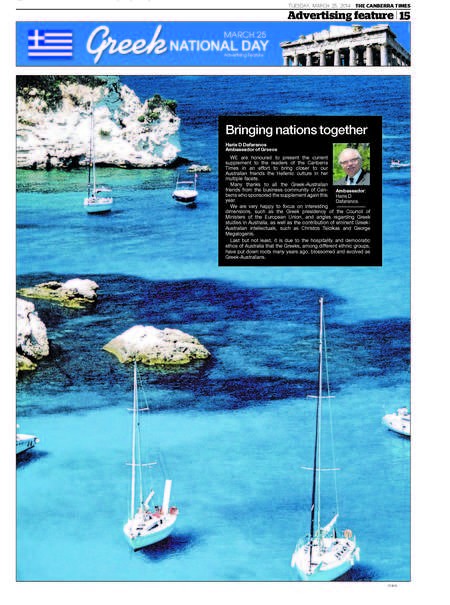 Preface: Bringing nations together
Haris D Dafaranos
Ambassador of Greece
––––––––––––
We are honoured to present the current supplement to the readers of the Canberra Times in an effort to bring closer to our Australian friends the Hellenic culture in her multiple facets.

Many thanks to all the Greek-Australian friends from the business community of Canberra who sponsored the supplement again this
year.

We are very happy to focus on interesting dimensions, such as the Greek presidency of the Council of Ministers of the European Union, and angles regarding Greek studies in Australia, as well as the contribution of eminent Greek- Australian intellectuals, such as Christos Tsiolkas and George Megalogenis.

Last but not least, it is due to the hospitality and democratic= ethos of Australia that the Greeks, among different ethnic groups, have put down roots many years ago, blossomed and evolved as Greek-Australians.

Read more of the supplement by viewing / downloading a .pdf version here: