Culture > Current Affairs > Cinema is worth the wait

Cinema is worth the wait 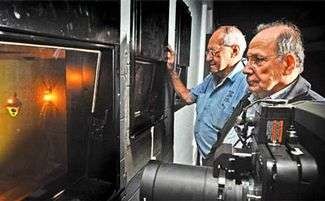 Picture: Spiro and Angelo Notaras look out into one of two 160-seat cinemas at the Saraton Theatre complex...

Like 12-year-old boys building a motorbike, Angelo and Spiro Notaras are giddy with excitement over their project.

Except the “project” has cost a motza and the “boys” are 77 years of age.

Two of Grafton’s best known faces, the cousins say they can’t go anywhere in public without people asking them when Grafton’s only cinema is opening.

“We are keener than anyone to open the doors,” said Spiro midway through a two-hour tour of the three-cinema complex yesterday. “And we understand people’s frustration.”

In a nutshell, the latest hold up in the two-year project is a question over whether the Federal Government will provide the heritage-listed theatre with a $1 million grant to remove the old stage and construct a new larger two-storey stage with an orchestra pit, dressing rooms and sound-proof band rehearsal space.

The success, or otherwise, of the grant application will not be known till the end of July.

If the grant comes through, minor adjustments will need to be made to allow a “movie-only” opening of the main theatre, while construction of the live stage is conducted behind a temporary wall. This may allow a public movie screening by the end of August, the Notarases said.

But if the grant is denied, an opening could be achieved early to mid-August, maybe even earlier, they said.

“This is a once-in-a-lifetime change for this extension to the historic theatre, and we were keen not to miss the opportunity to apply and hopefully be successful,” Angelo said.

The large stage, which would be pushed back further than the current one, would enable the theatre to accommodate large live theatre and musical acts – enough room for the entire Sydney Symphony Orchestra, he said.

The Notaras cousins, who are partners in the enterprise with Angelo’s two brothers Mitchell (Angelo’s twin) and John, are eager to explain that any previous hold-ups with the theatre’s restoration had only benefited the end product because of technological advances. When questioned over this logic with the argument that anything was outdated shortly after it was produced, Angelo said the cinema industry was different.

“They have been using film since the early 1900s, now the industry is changing to digital – that’s only one major change in 100 years,” he said.

“And we weren’t prepared to go halfway,” added Spiro.

“It’s no good people thinking they can push it along.

“There is no other complex like it in the country – its size, offering live shows and movies.

“There are only five of these projectors in Australia; we’ve got three of them.”

The cousins said the Christie 2200 projectors would provide the sharpest picture available anywhere.

Each cinema will boast a 3000-watt sound system with remarkably even-sound distribution.

“They won’t be leaving Grafton to see movies I can tell you, they’ll be coming to Grafton.”

The development has been built with energy efficiency as a priority, and the intention is to have the whole complex, which boasts a great solar aspect, powered by solar panels once it is up and running.

“Wherever possible we have only used local people. All the tradespeople are local and they’ve all doing a great job,” Angelo said.

The pair provided a long list of tradesmen who had worked on the project which The Daily Examiner will publish at a later date.

Asked about why they hadn’t retired, the pair just laughed.

“I’m gonna die on the job I think,” Spiro said.

“Our fathers taught us how to work and we saw that work ethic and it’s very hard to shake,” said Angelo. “But doing a development like this is not work at all, its sheer pleasure.

“We are giving the community something that’s going to be long-lasting and worthwhile.

“And we are duplicating what our dads (Jack and Tony) did in 1926 when they built the theatre.”

The Saraton was heritage listed in 1999, and the Notaras family tried to hand over the cinema to Grafton City Council for $1 in the same year but the council declined the offer, the Notaras’ said.

Spiro, Angelo, Mitchell and John then bought out all other family members and began to develop a plan for the redevelopment.