Is Kythira the perfect Greek island?

Andrew Bostock has spent much of his life living in and writing guidebooks on Greece but in Kythira – with its gorges, waterfalls and perfect beaches – he’s finally found the idyll he has always dreamed of. 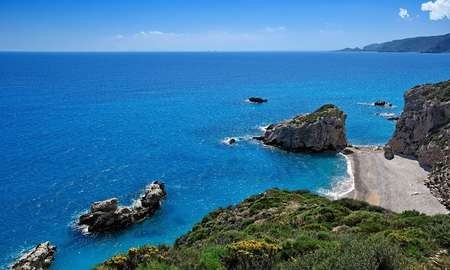 
In my 30-year hunt to find the perfect Greek island, I’ve visited around 40 of them – but my quest has been beset by twin, linked, problems.

Firstly, many of them follow a fairly set pattern: a small main town or port, two or three amazing beaches and, if you’re lucky, a ruin or old church atop the island’s one hill. For many this is all that is needed for a week or two away, but I’ve always yearned for more.

The second problem is that the larger islands can be blighted by an overabundance of visitors. Travellers in search of their own little bit of paradise go to more off-the-beaten-track islands, but these tend to get smaller and smaller, thus exacerbating problem number one. This year I followed advice from Greek friends and made for Kythira, and I think my hunt may just be over. 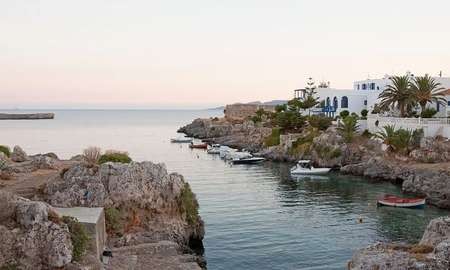 The port at Avlemonas. Photograph: Alamy

Kythira can be troublesome to get to, a positive advantage in the perfect island stakes. It is not close to any of the better known islands, lying on its own at the bottom of the Peloponnese peninsula. You can fly there, but only on local flights, and the familiar UK package tour is unknown on the island. The best way to arrive is by boat. This can be done, rather indirectly, from Athens or, more pleasurably, from the little southern port of Neapoli, after a journey that can take in some of the delights of the Peloponnese itself.

My nine-year-old daughter Jemima and I took the latter option and arrived in Diakofti, the new port of the island, but also home to perfect white sands and crystal blue water (as well as a rather large and disconcerting shipwreck). It was here that we first noticed one of Kythira’s quirks: the preponderance of Australian accents. In the early 20th century many islanders emigrated to Australia (or “Big Kythira” as it is known here). Many of their descendants return each summer, and even the locals often speak English with an Aussie twang. Apart from these, however, the island receives few tourists. 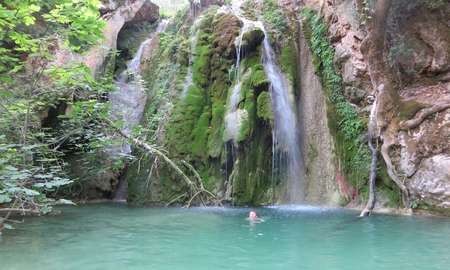 Jemima swimming at the second waterfall down from Mylopotamos. Photograph: Andrew Bostock

Heading west over the island, the landscape looked rocky and treeless, but Kythira is deceptive, and is cut by gorges and valleys that can hide secret treasures. We soon descended into one of these above the village of Mylopotamos, following a tree lined road that led to what might be the ideal Greek village. The name means “river of mills” and the village is set around a slightly incongruous duck pond that lies below the source of the river. We sat above this for our evening meal, in the Platanos taverna. This name is normally a good sign, and means “plane trees”: the ubiquitous shady trees that seem to hang over every village square. This Platanos, which has been serving up local dishes under its three plane trees for 130 years, did not disappoint. Later, we observed Greek tradition by changing venue for dessert, strolling down the steps past the river spring and to the duck pond, and sitting beside it at the Kamari cafe for coffee and ice-cream.

In the morning we followed the river down the gorge past the ruins of numerous mills that once ground the local wheat. We found our first waterfall only a five-minute walk away. It delights under two names: Neraida, after the mythological water nymphs, and Fonissa, meaning “murderess”. We couldn’t decide which we preferred. People were swimming here, but we continued down the gorge. One of the mills has been fully restored and here we met Phillipis Zervos, the owner and restorer. He showed us around and explained the history of the mill – built by his grandfather who shared the same name – and then he directed us to walk a further kilometre down the trail, to another waterfall, which was even more magical than the first. 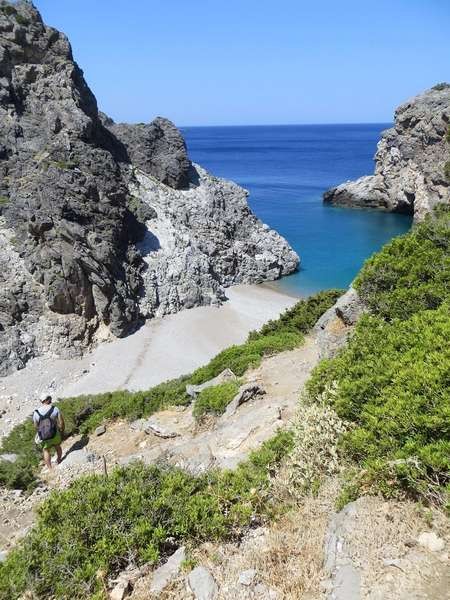 With a guide and the right equipment, you can continue down the gorge to the isolated beach of Kalami. This little slice of paradise is difficult to get to, as paradise should be. But, if you don’t fancy canyoning down the gorge, the alternative approach involves a hike that ends with a 30m cliff. There is a rope to help the brave, but we contented ourselves with staring at the deserted cove from above (I have been asked to point out that it was me, not Jemima, that chickened out). We did explore the nearby cave of Agia Sofia, impressively filled with stalactites and stalagmites, as well as a chapel with 700-year-old frescoes.

Swimming in the sea had to wait until we reluctantly left Mylopotamos. A friend had emailed me a list of seven must-see beaches (among them the white sands of Diakofti and the hard-to-reach Kalami). Before arriving I presumed that this list would include most of the beaches on the island, but as I circled them on my map I realised that this was just a small selection of more than 30 beaches on Kythira. We opted for Kaladi, on the other side of the island, which at least looked a little easier to get to. This proved optimistic as the single-track and potholed road ended above a long and steep staircase. The pebbled beach repaid the hike, divided into three by rocky outcrops and easily accommodating the 20-odd people who were there – in August! There was not even a cantina, rare for the islands, so we went to nearby Avlemonas for lunch, a small string of houses set above small coves filled with fishing boats and swimming platforms. Sotiris, its taverna, is famous for its lobster pasta, a little above our budget, but its gavros, small fried fish, proved to be a satisfying taste of the sea.

For our last few days we headed to Hora, the island’s capital, and a place that sums up what makes the Greek islands so special. The main town is set on a hill above its port of Kapsali, a common defensive measure in the days of piracy. We explored its white-washed lanes up to a Venetian castle with stunning views over to Hyrta, a sea-girt rock that lays claim to being the birth place of Aphrodite (don’t listen to the Cypriots we were told). Later in the evening, as little craft and bookshops opened their doors, we sat on a rooftop and enjoyed grilled meat and local wines from Zorbas, whose waiters still dress in black waistcoats and white shirts. 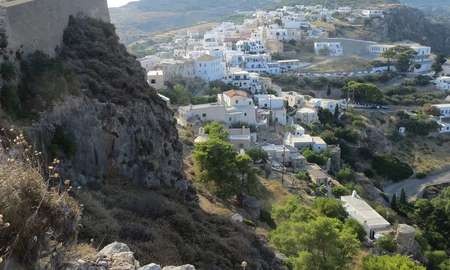 View of Hora from its castle. Photograph: Andrew Bostock

Before catching the ferry back to the mainland we took a final trip down to Kapsali and joined Captain Spiros, who took us out on his boat to the rock of Hyrta. He moored at the entrance to an overhanging cave and we soon found ourselves following him into the sea. In the dark recesses, we turned to see the last light from outside turn the water a luminous sapphire. Like much of Kythira, getting there required a bit of effort, but it was well worth it.

Kythira still has “rooms” – simple accommodation, often in owners’ homes. In Mylopotamos, we stayed with the delightful Giota in her house at the edge of the village (50 a night, +30 27360 33782). In Hora, the sprawling Niki offers real bargains (from €25, +30 27360 31488). More luxurious accommodation is also available, especially in the interior, where locals and a few foreigners have beautifully restored some of the old village houses. Try Xenonas Fos Ke Choros (from €95, +30 69807 29399, agreekisland.com).

Andrew Bostock is the author of the Bradt Travel Guide Greece: The Peloponnese – new edition out spring 2016