submitted by Kytherian Newsletter Sydney on 20.10.2014 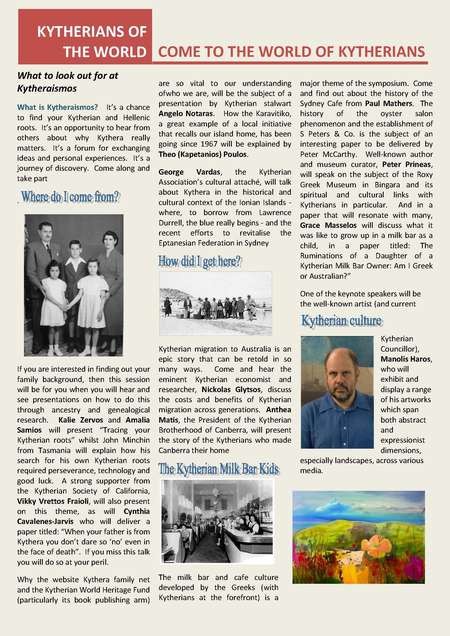 What to look out for at Kytheraismos

What is Kytheraismos? It’s a chance to find your Kytherian and Hellenic roots. It’s an opportunity to hear from others about why Kythera really matters. It’s a forum for exchanging ideas and personal experiences. It’s a journey of discovery. Come along and take part.

View / download a .pdf version of this announcement here:

What to look out for at Kytheraismos.pdf

View / download a .pdf version of the one page Kytheraismos
Flyer, here:

If you are interested in finding out your family background, then this session will be for you when you will hear and see presentations on how to do this through ancestry and genealogical research. Kalie Zervos and Amalia Samios will present “Tracing your Kytherian roots” whilst John Minchin from Tasmania will explain how his search for his own Kytherian roots required perseverance, technology and good luck.

A strong supporter from the Kytherian Society of California, Vikky Vrettos Fraioli, will also present on this theme, as will Cynthia Cavalenes-Jarvis who will deliver a paper titled: “When your father is from Kythera you don’t dare so ‘no’ even in the face of death”. If you miss this talk you will do so at your peril.

Why the website Kythera family net and the Kytherian World Heritage Fund (particularly its book publishing arm) are so vital to our understanding of who we are, will be the subject of a presentation by Kytherian stalwart Angelo Notaras.

How the Karavitiko, a great example of a local initiative that recalls our island home, has been going since 1967 will be explained by Theo (Kapetanios) Poulos.

George Vardas, the Kytherian Association’s cultural attaché, will talk about Kythera in the historical and cultural context of the Ionian Islands - where, to borrow from Lawrence Durrell, the blue really begins - and the recent efforts to revitalise the Eptanesian Federation in Sydney Kytherian migration to Australia is an epic story that can be retold in so many ways.

Come and hear the eminent Kytherian economist and researcher, Nickolas Glytsos, discuss the costs and benefits of Kytherian migration across generations. Anthea Matis, the President of the Kytherian Brotherhood of Canberra, will present the story of the Kytherians who made Canberra their home.

The milk bar and cafe culture developed by the Greeks (with Kytherians at the forefront) is a major theme of the symposium. Come and find out about the history of the Sydney Cafe from Paul Mathers. The history of the oyster salon phenomenon and the establishment of S Peters & Co. is the subject of an interesting paper to be delivered by Peter McCarthy. Well-known author and museum curator, Peter Prineas, will speak on the subject of the Roxy Greek Museum in Bingara and its spiritual and cultural links with Kytherians in particular. And in a paper that will resonate with many, Grace Masselos will discuss what it was like to grow up in a milk bar as a child, in a paper titled: The Ruminations of a Daughter of a Kytherian Milk Bar Owner: Am I Greek or Australian?”

One of the keynote speakers will be the well-known artist (and current Kytherian Councillor), Manolis Haros, who will exhibit and display a range of his artworks which span both abstract and expressionist dimensions, especially landscapes, across various media.

Manolis Haros studied etching and painting in Paris and had his first one-man show in Athens in 1981. One of his more recent exhibitions was at the Benaki Museum in 2011 where he presented an eclectic mix of works based on Aesop’s Fables to wide acclaim. His landscapes of Kythera are often dreamy and surreal.

Professor George Kanarakis will talk about literature of the Greeks of the Diaspora and the numerous examples of Greek-Australian writers, poets and other literary figures who graced the Antipodean stage.

Dr Maria Zarimis will take us down a path which we, or certainly our parents, have experienced with the Kytherian tradition of mantinades (rhyming folk songs) and funeral laments as part of the Kytherian cultural evolution of expressing our many and varied emotions.

Melina Mallos from Brisbane will run a workshop based on ideas from her book “Catch the cat”, the first English-Greek bilingual picture book. The historical development and significance of traditional Kytherian folkloric dressing will be the subject of an interesting presentation by Politimi Moulos.

Meanwhile, back in Kythera ....

Have you ever dreamt of rebuilding your family home on the island? Or investing in property in Kythera? What are the legal and financial obstacles? Former mayor Emmanuel Cassimatis will discuss ownership and development of land in Kythera whilst Anthony Conomos will present “Kythera living”, your future in Kythera. The Roman philosopher Cicero famously wrote that to add a library to a house is to give that house a soul.

The establishment of the new public library in Kontolianika, as an example of inspired Australian and US expatriate benefaction on our island home, will be related by George Poulos. Yiannis Mavrommatis will present a paper on the intriguing similarities and coincidences between the island’s Agios Theodoros and the new hospital at Potamos.

Peter Magiros will discuss how his dream of a multifunctional sports facility on the island has come to fruition with the opening of the impressive sporting field at Livadi. Recent archaeological explorations of the Mentor shipwreck off Avlemonas and the Return to Antikythera expedition have featured our own John Fardoulis who will provide valuable insight into these projects.

That the Greeks and Australians fought together against the Nazi invaders when the rest of continental Europe had either fallen or surrendered during World War II, is the stuff of legend. Their famous exploits will be covered by historian Maria Hill in her discussion of the role of the Australians in Greece during the war and by journalist and broadcaster Mike Sweet as to the Australian war effort in and around Kythera as the Battle of Crete raged.

There will be other speakers to hear and engage. Because the very concept of Kytheraismos - a global interaction between people of Kytherian descent and philo-Kytherians - is a vehicle by which we are able to connect the real world of Kythera (both the present and the past) with the fantastic world of the Kythera in our dreams.

Thank you George for sharing the highlights of the coming symposium!