submitted by Kytherian Photography Snapshots on 15.09.2014 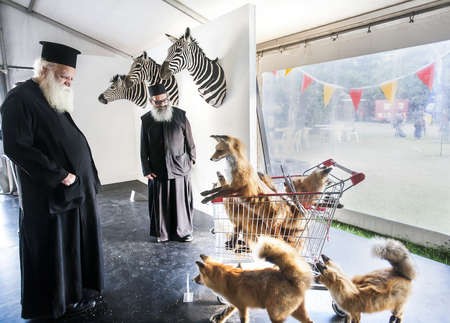 In June, Art & About Sydney invited Australian photographers to submit images representing Australian Life. Entries have now closed. The competition was open to professional and amateur photographers alike, with the judges looking for images from across the country that engage and intrigue the audience, showing Australia beyond the icons. Twenty two finalists have been chosen and large scale reproductions of their work are being exhibited in Hyde Park North (along the St James walkway) for Art & About Sydney 2014 from (19 September – 12 October).

The winner of Australian Life will be announced on 19 September 2014 as part of Friday Night Live in Martin Place and will win $10,000.

Pondering in the tent of wonder. "During a visit to Sculptures by the Sea (2013) in Sydney's eastern suburbs, I came across some early visitors at Tamarama Beach. The contrast between spiritual leaders steeped in tradition and modern day creative art screamed to be captured. 'The tent of Wonder' was created by Rod McRae and exhibited at Sculptures by the Sea 2013." Tamarama. Photo: Brent Winstone.