The museum was created in a 1930s cinema and café established by Kytherian migrants. 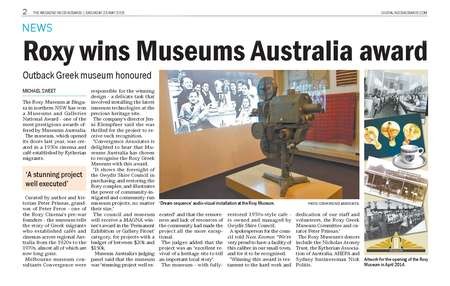 The Roxy Museum at Bingara in northern NSW has won a Museums and Galleries National Award - one of the most prestigious awards offered by Museums Australia.

The museum, which opened its doors last year, was created in a 1930s cinema and café established by Kytherian migrants.

Curated by author and historian Peter Prineas, grandson of Peter Feros - one of the Roxy Cinema's pre-war founders - the museum tells the story of Greek migrants who established cafés and cinemas across regional Australia from the 1920s to the 1970s, almost all of which are now long gone.

Melbourne museum consultants Convergence were responsible for the winning design - a delicate task that involved installing the latest museum technologies at the precious heritage site.

The company's director Jenni Klempfner said she was thrilled for the project to receive such recognition.

"Convergence Associates is delighted to hear that Museums Australia has chosen to recognise the Roxy Greek Museum with this award.

"It shows the foresight of the Gwydir Shire Council in purchasing and restoring the Roxy complex, and illustrates the power of community-instigated and community-run museum projects, no matter their size."

The council and museum will receive a MAGNA winner's award in the 'Permanent Exhibition or Gallery Fitout' category, for projects with a budget of between $20k and $150k.

Museum Australia's judging panel said that the museum was "stunning project well executed" and that the remoteness and lack of resources of the community had made the project all the more exceptional.

The judges added that the project was an "excellent revival of a heritage site to tell an important local story".

The museum - with fully-restored 1930s-style cafe - is owned and managed by Gwydir Shire Council.

A spokesperson for the council told Neos Kosmos: "We're very proud to have a facility of this calibre in our small town, and for it to be recognised.

"Winning this award is testament to the hard work and dedication of our staff and volunteers, the Roxy Greek Museum Committee and curator Peter Prineas."

The Roxy Museum's donors include the Nicholas Aroney Trust, the Kytherian Association of Australia, AHEPA and Sydney businessman Nick Politis.