Lights, camera, action: Saraton Theatre manager Robbie Seymour is all ready for the reopening of the historic theatre in Grafton. 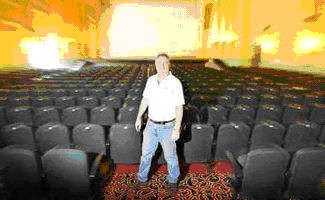 Today Clarence Valley cinema lovers will get their first look inside a state-of-the-art movie complex that has been two and a half years in the building.

The Saraton Theatre’s three cinemas will hold a ‘soft’ opening today screening a premiere of the Australian movie Tomorrow When the War Began with a selection of other movies including: Inception, Salt, Despicable Me, Step Up Eclipse and Toy Story 3.

Cinema manager Robbie Seymour said yesterday he also hoped to have Avatar 3D available for the opening day but was not certain if it would be available in time.

He said a number of the movies had been loaded into the computerised Christie 2200 projectors.

But he said the cinema had not yet received all the computerised access codes, called key delivery messages (KDM), to some of the films.

“We’re not sure when they will come, it could be 10pm tonight,” Mr Seymour said.

He said technicians had installed the cinema’s 3D technology yesterday and it would be fully functioning for today’s screenings.

The owners of the theatre, the Notaras family, have spared no expense refurbishing the cinema originally built by the family in 1926.

While retaining the ambience of the cinema by paying careful attention to the original design features of the building and its colour scheme, the refurbished building conceals a network of the latest projection and sound equipment.

Cousins Spiro and Angelo Notaras, who head a family consortium that has redeveloped the historic building, have made sure their cinema has the latest technology – delaying the opening until they secured the projectors and sound equipment they wanted.

“There is no other complex like it in the country its size, offering live shows and movies. There are only five of these projectors in Australia; we’ve got three of them,” Angelo said.

The projectors provide the sharpest picture available anywhere and each cinema will boast a 3000-watt sound system with remarkably even sound distribution.

Cinema management has been coy about ticket pricing, except to say it will be lower than other regional cinemas.

“We want people to come down to the cinemas and be pleasantly surprised,” Mr Seymour said.