This remedy isn't specifically Kytherian, but I learnt about it on Kythera about 20 years ago, and have found it useful ever since.

One of the world's most famous herbalists, Juliet de Bairacli Levy, lived down at Paliopoli for many years. She had a one and a half room stone house just up from the second beach which is known as "Aphrodite's Beach" by the regular foreigners. She used to get her water once a week from the springs at Mitata, driven up and back by none other than George "Tarzan" Kastrisios, one of the islands most (in-)famous taxi drivers. Her Greek was broken and it was always a delight to hear them chatting with each other - Tarzan had developed a version of Greek which Juliette could understand which consisted mainly of the phrase "poli entdaksi!".

Juliette was, as I mentioned, world famous (her books, one of which - The Illustrated Herbal Handbook is considered an botanical medicine classic - still brings in its keep at Faber and Faber) and she was visited incessantly by disciples from all over the world. Many of them rented motor scooters, which is how I came to know about this remedy.

It is simply this: in case of burns apply potato. I know it sounds too simple to be true, but it not only works, it probably works better than anything else (I'll justify this below). The motor scooters all the island visitors were renting back then had one fatal flaw - the exhaust pipe at the back was perilously near the place where the motor scooter passenger places their calf muscle. Go over a couple of bumps and you were almost certain to get quite a burn. I saw Juliette apply her remedy herself. A young woman had burnt herself on a scooter, Juliette grated a peeled potato into a mush, and applied it. The pain vanished and when the wound did warm up again more potato was applied. After a couple of hours of this the wound was painless and within a couple of days had disappeared. No pain, no scar. The other tourists weren't usually as lucky.

OK, we don't know what that particular burn would have looked like if treated differently, but I have seen the difference. Most recently when I burnt my had while sterilising the baby's bottle. Boiling water was spilt over thumb and finger. I applied cold water, then potato (first sliced, because I didn't have time to grate it), then as a mush. I left a small space uncovered to have something to compare it to. The result after 2 days: no mark where the potato was applied, dark red where it wasn't. 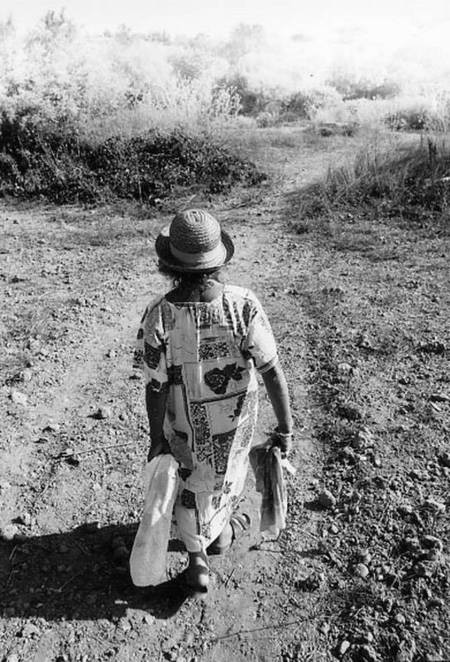 Juliette on her way to a morning swim at Paliopoli

But I have one more even more convincing proof. A couple of years ago on the BBC I heard of an Indian doctor in London who was being internationally celebrated because he had discovered a "miracle" cure for severe burns. Guess what it was?


Here, from The illustrated Herbal Handbook (1974 edition) the first paragraph about treating burns (Juliette, wherever you are, I hope you don't mind me quoting an exerpt from your book.)

Burns and Scalds.
Apply slices of raw potato immediately, squeezing the juice on to the burnt or scalded parts. Then apply thick honey to exclude all air. Preferably grate the potato finely.

I wish to add that although I live in Australia, my mother in law came from Italy and she burnt her had one Christmas Day and she very calmly peeled a potato thickly and placed over the burnt part of her hand and within 15-20 minutes all pain was gone and all the reddness had disappeared. She claimed that it was an Italian village remedy that she learnt as a little girl. She is now 80years old.