'I don't think it's any accident I'm a storyteller'. George Miller. 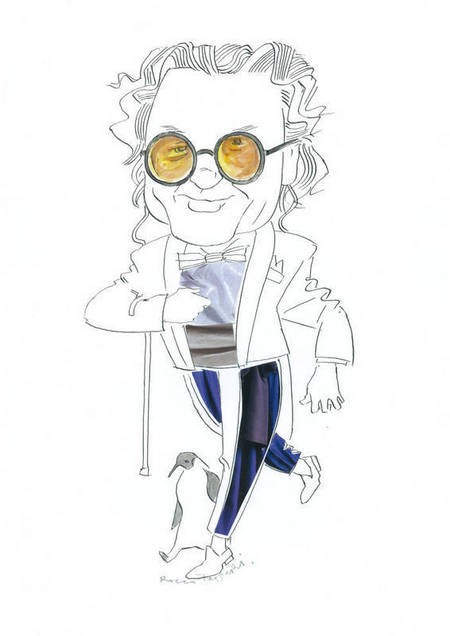 From dancing penguins to singing pigs, this Greek-Australian is a colourful storyteller. But, he tells Anthony Stavrinos, so is everyone in the old country.

WHEN an earthquake hit southern Greece a year ago, it almost destroyed an enduring symbol embedded in George Miller's memory of his father.

Seventeen years ago Miller had travelled to the island of Kythera, donating about $50,000 to help restore Agia Triada, a small Greek Orthodox church perched high on a cliff in the town of Mitata.

The creator of blockbusters including the Mad Max trilogy, Babe, Lorenzo's Oil and now Happy Feet, matched dollar-for-dollar the fund-raising effort of Sydneysiders Matina and Manuel Samios, also from Mitata. But the restoration work was almost totally undone when the modest building narrowly escaped being flattened by the tremor, measuring 6.9 on the Richter scale, when it hit Kythera on January 8.

Miller was shocked when news of the "act of God" filtered through to Australia. "I've only seen pictures, but the church up there on the escarpment way up in the hills of Kythera is the centre of the town. It's like the beacon of the town and the square around it," Miller explains. "And the square, you've seen part of that slide away, and the church, it seems damaged beyond repair.

"It's very sad because it's taken the heart of a village out, which has been there many centuries. The church has been there since the 19th century, I think. My father was born a few hundred metres from the church. And my great-great-grandfather was the founding priest, Papa Yianni."
Miller's attachment to the church is less religious than sentimental. It is a reminder of trips to Kythera of the past, but more specifically it is symbolic of the relationship he and his three siblings - twin John and younger brothers Chris and Bill - had with their father, James Miller.

James Miller, who served in the Australian Defence Force, with his last posting in Kempsey on the NSW North Coast, died in June 1997. But his legacy laid the foundations for his son's filmmaking success. Miller believes his Greek heritage has given him the ability and desire to communicate stories.

"I don't think it's any accident I'm a storyteller. What I found when I went back to that island was everyone's a storyteller. Everyone sits around telling each other stories of the deep past as if it was yesterday. There were just stories that went back centuries."

Greece's profound history ensures that at every corner there's a tale - ranging from the dark and mythological to the hilariously funny - and always someone to tell it.

Miller says it's something you don't quite find in Australia's younger culture, with the exception of its Aboriginal history. In fact, he says, the Greeks in Kythera demonstrate an understanding of their land through stories in much the same way as indigenous Australians.

"It reminded me very much of the times I'd been with Aboriginal storytellers, how they knew every nook and cranny of their land through their stories," he says.
"It was quite striking how that would seem to be the case when we went back to the island life. It was not a city, it was villages and countryside with fields, and it's very much of the land, and that really stuck with me."

Miller says there are more similarities between Greece and Australia that explain why his father fell in love with his new homeland.

"Rural Queensland was exactly like the summer on the island of Kythera - the same heat haze, the same cicadas, the same brown grass, the same intense light," Miller explains.

"I could never figure out why my father loved Queensland so much because he left [Greece] when he was a boy; he basically left his parents when he was a nine-year-old boy.

"I realised what he'd done was replicate the kind of life he had on the island, in Chinchilla, Queensland. It was very, very familiar, just physically when I went back there [to Kythera] it reminded me so much of where we grew up."

The filmmaker has generated hundreds of millions of dollars at the box office, but earlier in his career there was strong parental pressure to continue to practise medicine.

"His father wasn't happy about him changing course and I said to him, 'If he doesn't succeed, he can always go back to medicine'," mother Angela explains.
"Of course, when he did succeed, his father was very proud."

Along with John, Miller completed his studies in medicine at the University of NSW, working briefly at Sydney's St Vincent's Hospital. But he maintained his interest in the movie business, making a one-minute short film with his younger brother Chris, which was entered into a student film competition.
They won first prize, a course at a summer film school workshop in Melbourne in 1971, which is where Miller first met Byron Kennedy.

Miller and Kennedy teamed up, and began making short features and experimental films. Probably the best-known was Violence In The Cinema, Part 1, which won several film festival awards.

During this time Miller was still supporting his film career by working part-time as a doctor.

"He was a doctor in the Air Force and when he did home visits, he took Byron with him in the car and they talked about movies," Mrs Miller recalls.

"He used to come up [to Sydney] and visit and wasn't worried about what he was wearing. Any money he was earning would go into making films. It wasn't easy at all - it took a lot of effort and time."

She says her son had been "in the right place at the right time" when he and Kennedy - under the umbrella of the Kennedy Miller Entertainment production company - made the film that "put him on the map", Mad Max.

Another enthusiastically received instalment of the film epic came with Mad Max 2, before Kennedy was tragically killed in a helicopter crash in July 1983.

He still plans to make Mad Max IV, but says it's still a while off. "A lot of people say to me I must be very proud of George. I tell them I'm proud of all four of my boys," Mrs Miller, 85, explains. "I'm more proud of him because success hasn't changed him."

Rocco is a senior cartoonist with the Fairfax Press in Australia. His work is world reknowned.

To understand the creative process of "cartooning", and how Rocco arrives at his various cartoons, you are encouraged to visit the smh website at:

Rocco's ancestry can be traced to a small village in Italy. He has a deep affinity with the small island if Kythera.

As an expression of that affinity he has donated the original art work of the George Miller Happy Feet cartoon to kythera-family.net. Rocco is keen that we use the artwork to generate funds for the restoration of the church of Ayia Triatha, in Mitata - the village of George Miller's heritage.

Kythera-family.net has decided to reproduce a Limited Edition set of 15 replica's of the original artwork to raffle/auction off - in order to generate funds. These will be signed by the artist and the world famous Director-Producer.

The original artwork will be gifted by kythera-family to George Miller, at an upcoming major function, designed to generate funds for Ayia Triatha.