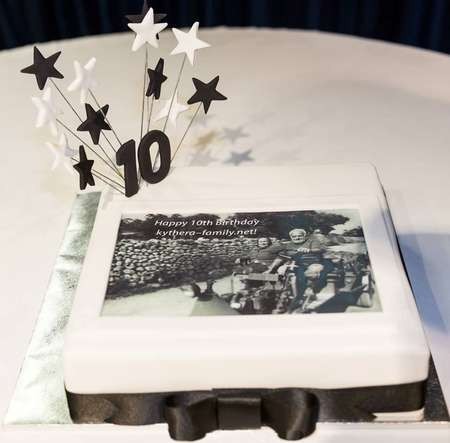 "I found Vikki Vrettos Fraioli on Kythera-Family.net and mailed her regarding her Hlentzos connection, and since the first email a couple of days ago, I have had many many emails from her with a huge amount of information regarding my relatives. If this website was not available to us, all this information would never have been shared."
Heather de Marco, April 2013 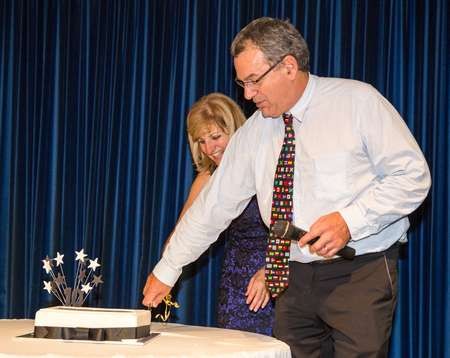 It is now ten years since we first launched kythera-family.net (kfn). If you don't already know how it came to be, here's a short recap of the story:
The seed was actually sown back in 1996 when I put on a photographic exhibition called "A Village on Kythera" in the Bondi Pavilion. There I met so many lovely Kytherians (and others – like a group of Sicilian grand¬mothers who cried when they saw my pictures because it reminded them of home...). Many of the Kytherians told me of their collections of vintage pictures from Kythera. I would have loved to help them collate and scan and publish their pictures but it wasn't until about 2001 that I found an affordable and practical solution: to use the internet.

Back then, "community sites" were almost unheard of and the founder of Facebook was probably just out of nappies. So I suppose I shouldn't have been surprised that my idea to create an online heritage repository, to which members of the Kytherian community could upload their family material to the site for the rest of the world to share and enjoy, fell on deaf ears in the beginning.

Then a man, who, up until that time, had never used the internet himself, saved the day: Angelo Notaras. Ann Coward suggested I get in touch with him and it didn't take long for Angelo to recognise the potential benefits to the Kytherian community and he put his conside-rable reputation behind the project. He and his equally generous brothers, John and the late Mitch Notaras, put their money where their vision was and helped convince others to financially support the endeavour.

Next came the ebullient George C. Poulos to the party and, when he wasn't fervently preaching to the less internet-savvy members of the Kytherian Association of Australia (KAA) that the internet wasn't just a fad, he was motivating community members to entrust copies of their heritage material to him to upload to the young site. He and Angelo managed to persuade the KAA Board to embrace the concept, and the latter have been loyal supporters ever since, as evidenced by this article.

The initial problem was that the people with the most knowledge and material on Kythera were of a generation who were still fazed by mobile telephones, never mind by "websites", "uploading" and "urls". Ten years on, even if that generation doesn't use the internet or emails regularly themselves, they generally know what it is about and allow their children and grandchildren to upload their family stories and picture to our site.

Over the past ten years the 3,000 registered users have submitted over 19 000 entries to KFN: life stories, maps, recipes, and other documents to the site, which are viewed by around 20 000 visitors each month!

The extensive Message Board on the site gives evidence of the hundreds of connections made by the site between Kytherians separated by thousands of kilometres, or far less. Two of our most avid contributors live only a few kilometres from each other in California, but discovered their family link through our site.

The possible significance of one group photo from Kythera from 1920 with a dozen people in it is exponential: a fifty-year-old in that picture might have had five children and twenty grandchildren and forty great-grandchildren. That makes sixty-five descendents per person in the picture and a total of 780 for all the subjects. Now, how many of those 780 will have ever seen that picture? Not many if it is stored under someone's bed. But online all of them have access if they care to look.

And the nice thing about a website as opposed to a publication is that there is virtually no limit to the amount which can be presented on it. So it's not too late to post your grandmother's Greek passport or your great-great-grandfather's birth certificate. It's the best way to make sure that your own great-grandchildren will be able to find it one day. 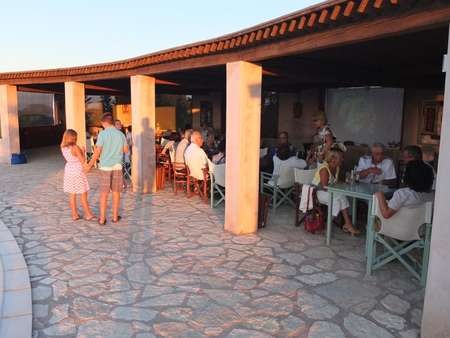 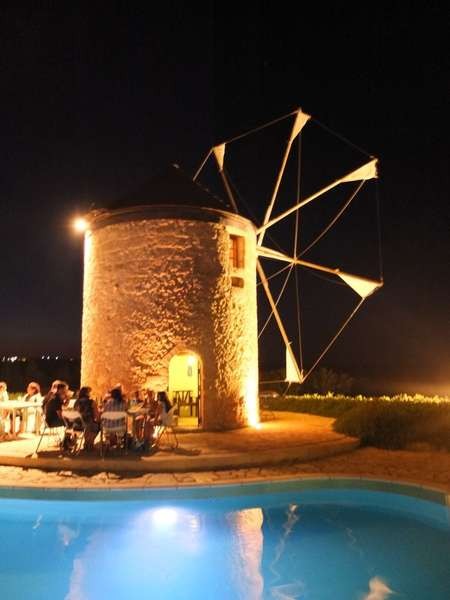 The ten-year anniversary of kythera-family was celebrated with a well-attended party held at the Mill Resort, Mitata, Kythera, in July 2013.

In Australia it was celebrated at the Kytherian Association November Family Dance, Westside Reception Lounge, Marrickville on 23 November 2013. 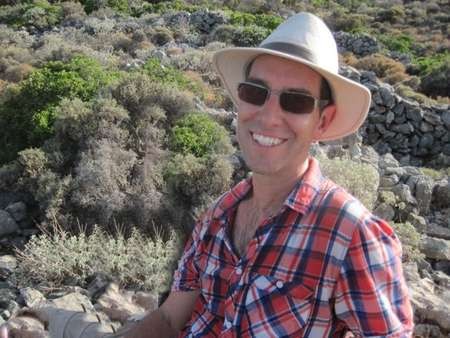 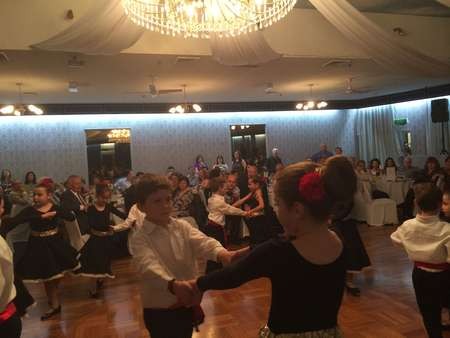 I agree with James that the key driver of kfn has been Angelo Notaras OAM. I also agree that the success of the web-site can be attributed to a number of superior features inherent in the site: The web-site is generative. One photograph or one story can elicit a great deal of additional inter-related information.

The web-site is connective. Individuals, families, and organisations have been connected, and re-connected. At every level, the spirit of kytheraismos has been greatly enhanced.

The web-site is revelatory. New information is being uncovered all the time, which most of the world’s Kytherians had previously been unaware of.

The number of Kytherians and Philokytherians who, like Heather der Marco, quoted earlier, who have derived immense pleasure from kythera-family.net? Unknowable! What we do know is that an economic and architectonic infrastructure has been put in place to ensure that www.kythera-family.net will be maintained indefinitely. Hence it will always remain a key force in the preservation, maintenance, and enhancement of Kytherian history, culture, artefacts, ethos and heritage.

By its very existence kythera-family.net has helped energise its principals and supporters to create new and exciting projects – many of which most Kytherians around the world would not guess have derived from kfn. These include the publishing accomplishments of the Kytherian World Heritage Fund – as of mid 2014 thirty-one books with a Kytherian theme available for sale in Australia and in Greece.

kfn has also forged powerful links with the Society of Kytherian Studies in Athens, who have also published 25 books with a Kytherian theme in the Greek language, and the Departments of History and Philosophy at Athens University through Professor’s George and Athanassia Leontsinis. Strong links with KIPA and the Kytheriasmos Institute have also been created. The website has already inspired a Masters Thesis in Germany by Angeliki Pentsi, and Alexander Riedmuller will soon publish his Ph.D thesis on the the kfn website in Bamberg, Germany.

kfn aids people in research, sometimes on a daily basis. For example, on the 7th of April 2014, I received an email from a person thanking kfn and me for providing information on the site which helped him with a paper he delivered the previous week to the 10th Panionian Conference. The topic being "Kythira-Smyrna: The steamboat connection between two places during the 19th century and their unknown perspective." Rosa Cassimatis's name found its way into all.

After research I have concluded that Rosa is NOT buried, as most believe, in the Angelo Cavallini tomb in the Saint Spyridon of Kapsali cemetery but was, most likely, buried in Corfu where she died. If she had been buried in Kythera she should have been mentioned on the gravestone, as her (second) husband died much later than her. No such thing. The Corfu Mental Hospital Archives do not report any final resting place, but as she died in 1882 even if she had been buried in the city of Corfu cemetery her grave is probably lost. Again I'd like to thank all contributors to the site who helped me with my research”. This is a tangential Kytherian interest. But the communication indicates into how many different areas kfn managed to penetrate.

kfn inspiration also led to the preservation and archiving of the Fatseas collection of plate glass negative photographs. This in turn led to the publication of the books, A Kytherian Century and Panayotis Fatseas: Kytherian Faces, 1920-1938, and an Exhibition in the prestigious Benaki Museum, Athens.

Other Special Projects included the importation into Kythera of medical and aged care equipment to benefit residents and patients at the Aged Care facility and Hospital at Potamos. The importation into Kythera of Library shelving from the USA, and later the organisation and funding to completion of both the interior and exterior of the Kytherian Municipal Library, the first Lending Library established on Kythera in 3,000 years. Principals of kfn also aided in creating the first Greek Australian Museum of migration in Australia – the Roxy Museum, located within the Roxy Museum ‘complex’ in Bingara.

James Russell Lowell (1819-1891) asserted that "creativity is not the finding of a thing, but the making something out of it after it is found." By that criterion www.kythera-family.net is a very creative entity indeed. Να τα εκατοστήσεις.

You are the authors! Kythera-Family.net - the online cultural archive for Kythera - aims to preserve and reflect the rich heritage of a wonderful island. Members of the community are actively invited to submit their family collection of Kytherian stories, photographs, recipes, oral histories, and home remedies etc. to the site. Uploading directly to the site is easy and free. Thus we can help make available valuable and interesting material for current and future generations, and inspire young Kytherians to learn more about their fascinating heritage.