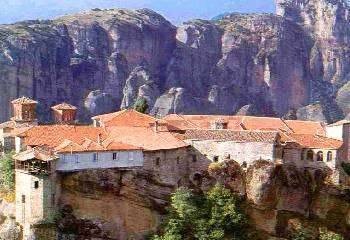 Ayios Haralambos is the Patron Saint of the village of Karavas, Kythera.

"On February 10th we honor one of the most beloved Saints of the Eastern Orthodox Christian Church. His name is Haralambos. In English, the translation for the name Haralambos used by most Orthodox Christians is "Harry". Haralambos lived in the 2nd century in a small town called Magnesia in Asia Minor. He became a Priest at a very early age and served his community with great zeal.

What has prompted the Orthodox Christians throughout the world to display such love and affection for St. Haralambos? Why has he been so very close to the hearts of all of us for over 1700 years? Perhaps it is because of the fact that no other Priest in the history of Christianity suffered so much in one lifetime for his religious convictions.

In the city of Magnesia, the governor of the province, Loukianos, inflicted great pain upon St. Haralambos because he refused to worship the idols of the Empire. The saintly Priest was first tied to a post in the public square and ridiculed by the pagans. Soldiers of the governor slashed the body of St. Haralambos with heavy cutting irons. St. Haralambos in spite of the terrible agony refused to deny Christ and accept their pagan gods.

After being tortured, Haralambos was dragged by his beard through the streets of Magnesia by soldiers on horseback. Many additional forms of torture were used to force Haralambos to give up his faith, yet he would not. During the ensuing months, St. Haralambos miraculously survived all forms of torture. Eventually the people called him "the man they cannot kill". People spoke of many miracles attributed to St. Haralambos during his imprisonment.

Thousands came to the jail to seek his blessing. Hundreds of afflicted souls came to be healed of their sicknesses. Haralambos became known also as the miracle-worker. He caused the lame to walk and the blind to see. Some thought he was the Resurrected Christ who had returned to earth. St. Haralambos proclaimed to all that he was not the Messiah but he was only the instrument of the Lord's Divine Grace.

The Roman Emperor, Servius, was enraged by the actions of Haralambos and ordered the Saint to be brought to the capital of the Empire that was then located in the ancient city of Antioch (192 A.D.) In the city of Antioch, Haralambos was led about the city with a horse bridle in his mouth. This was done to ridicule both him and the Christian faith, which he continued to uphold.

The soldiers of the Emperor nailed Haralambos to a cross with over 100 large spikes that pierced the skin of the pious Saint. Other forms of torture were administered, and yet Haralambos did not relent or die. In his great anger, the Emperor ordered Haralambos beheaded!

As the two executioners raised their swords to kill the Saint, suddenly a voice was heard from heaven saying, "Well done My faithful servant, enter into the kingdom of Heaven." At that very moment, St. Haralambos passed away without a single blow being struck. The executioners were dumbfounded. They knelt before the body of the Saint and asked God for forgiveness.

The Emperor became even more enraged, and ordered the two would-be executioners of Haralambos beheaded. Their names were Porphirios and Baptos, whose feast is celebrated also on February 10th. Thus the beloved Saint Haralambos truly had become "the man they couldn't kill," for he was taken by God Himself into the Kingdom of Heaven."

The body of St. Haralambos is now in the Monastery of Saint Stephen in the Meteora, Greece, where it performs miracles to this day.

The name Metéora comes from the Greek work meteorizome, meaning "to hang in mid-air", and the monasteries seem to do just that, perched on a scattering of strangely shaped pinnacles that rise out of the Peneus valley just to the north of Kalambáka. Looming between the Pindos range and the Thessalian plain, the rocks remain an enigma. Some geologists say a prehistoric lake covered the area 30 million years ago and swept away the soil and softer stone as it forced its way to the sea. Others believe the Peneus river slowly carved out the towering pillars, now eroded by wind and rain, that rise to 300 m (984 ft) above the plain.

The natural sandstone towers of Metéora were first used as a religious retreat when a hermit named Barnabas occupied a cave there in 985 CE. Others joined him and also made their homes in the caves that score many of the rocks. In 1336, they were joined by the monk Athanásios from Mount Athos who founded the monastery of Megálo Metéoro on one of the thousand or so pinnacles. Twenty-three monasteries followed by the time of the Ottoman reign of Süleyman the Magnificent (1520-66). However, due largely to their precarious location, many had fallen into ruin by the end of the 18th century. Until the 1920s, the only way to get to most of the monasteries was by being hauled up in a net drawn by rope and windlass, or by equally perilous retractable ladders. A much quoted story relates how an abbot, when asked how often the ropes were changed, replied "when they break." In the 1920s on the orders of the Bishop of Trikala, stairs were carved to make the remaining six monasteries more accessible. Today the ropes are used only for hauling supplies and building materials. 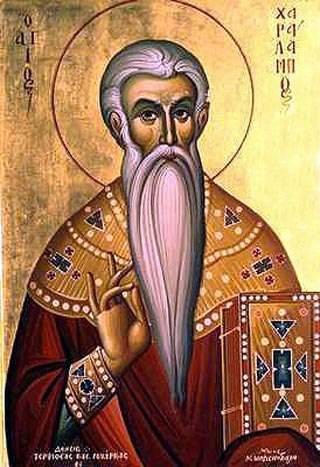 The original chapel of St. Stephen (Agios Stephanos) was built by the monk Ieremias in 1350 but the rock appears to have been inhabited well before 1200. Its beautiful frescoes have nearly been destroyed by time and by invading vandals. There are two more chapels, Protomartira Stephanou and Agios Haralambos. The latter is an imposing structure with three cupolas. It houses a beautifylly carved wooden iconostasis and altar. Since 1333 the monastery is called Vassiliki (Regal) and Patriarchiki (Patriarchal) because the Byzantine Emperor Andronicus III Palaiologos spend a short time there and made donations. Apart from the manuscripts, liturgical vessels, icons, etc. the monastery holds, it preserves as well, the skull of Agios Haralambos, which is said to be miraculous.