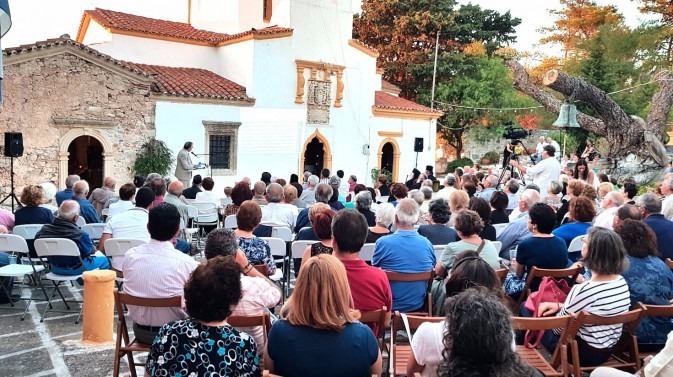 His story and timely influence in Kytherian life

On the 30th of July 2017 we attended an interesting presentation in the courtyard of Saint Theodoros by Yiannis Mavrommatis, educator-researcher from Pitsinades, titled: Saint Theodoros Protector of Kythera: His story and timely influence in Kytherian life.

Enriching his narration with pictures of documents, buildings, icons, short videos and interviews, he spoke about: Two important manuscripts concerning the life of the Saint and Kythera; the church and most important renovations made throughout the centuries; and the historical building of the school. Then he spoke of the Bishopric that had its headquarters at the Saint, the old festivals, the forestry, the new Hospital and the Asclepieion. Finally, he noted the need for renovation of the church and landscaping of the surrounding fields. He put emphasis on educational visits to Saint Theodoros, and other historical monuments of the island by the schools in order to foster students’ understanding of the island’s important heritage, so that they will respect and look after them in the future.

In the beginning Mr. Mavrommatis presented two valuable manuscripts that reference Saint Theodore and life in Kythera during the 10th and 15th centuries. These documents are valuable artefacts κειμήλια   (heirlooms) for Kythera because they are the only sources of information about life in Kythera during those times. The first, deals with, the Life of Osios Theodoros, containing noteworthy details for the deserted by pirates Kythera in that time. For the first time a copy of the original document was presented, with the original being kept in Moni Iviron, at Mount Athos. In this manuscript it is underlined that Saint Theodoros was the first Settler, because the threat of pirate raids those years discouraged the arrival of settlers on the island. Only after the arrival of the Saint, which coincided with the elimination of the pirates by Nikiforos Fokas in 961 AD, did the settling of the island begin. In the same document the Saint is referred to as Healer and Protector of Kythera, qualities derived from his miracles and depicted later in his typical icon where he holds the castle of Hora protecting the island as its Patron Saint. These qualities of his grace are expressed on the excellent hymns performed wonderfully by the chorus in his panigyri on the 12th of May 2017, and shown in video by the speaker.

The second manuscript is the famous Chronicle of Heilas, a copy of which Mr. Mavrommatis got from the Library of Saint Mark in Venice where it is kept. This document is a report on 1457 of a monk Heila that lived in those years in Saint Theodoros, through which he pled the Venetian commanders then of Kythera, to intervene and claim the return to the Saint lands that rightfully belonged to him, which previous vicars of the family Notaras had taken and were giving to their daughters as dowries. In the 16 paged surviving report however, there is valuable information contained about life in Kythera during the middle ages. Moreover, it refers on important renovations to the church, as well as to social conditions of the island.

Then, he spoke about the church building and noted the major renovations and changes made on it throughout the centuries. He mentioned the most important renovation that took place during the time of Bishop Valerianos on 1635 and showed the impressive blazon with his inscription, above the entrance of the church. Additionally he spoke about the indoor-renovations to the altar, and to other parts of the church. Renovations marked by the contemporary Bishops with their personal notes or crests, such as Nikiforos Mormoris, Kallonas, Meletios.

Also presented were the anniversary hymnology editions of the Saint that escorted important renovations.

Next was the presentation of the School that was built around 1650 to train priest-teachers in order to serve the church and teach Greek at the Ionian islands and Crete. This nice building with the elaborate windows and entrance, functioned as a public school for the north of Kythera from 1824 to 1829 and attended circa 120 students from Karavas to Mitata and Fratsia. It was subsequently abandoned, because other schools were built soon in every village, and as years passed by the roof collapsed. It was renovated in 1996 and is used as a reception hall, but also as a training centre for conferences and seminars.

Then Mr Mavrommatis referred to major donations by the Kytherians of diaspora during the years, the works paid for, and items donated to the church.

The festivals of the Saint being used as a Political Arena was also discussed, noting the election of the representatives of the villages of the whole island προεστοί  every 4 years on the Sunday of Orthodoxy taking place there, but also as Political barometer during pre elective periods, where the candidates delivered their political speeches to the crowd, after the litourgy. The massive presence of people gave strength to the villagers, so they manage  to kill two aristocrats αρχοντες  on the 12th of May 1799, as an expected result from their unbearable oppression and the high taxes forced upon them by the Venetians and abused by the άρχοντες.

About the forestry at Saint Theodoros at the time of Metropolitan Meletios and Koksma during 1960-70, there was long reference, emphasizing their importance because on the one hand, during the time of high unemployment they gave jobs to dozens of families coming from Hora to Karavas, with others working at Agios Theodoros nursery, and others planting in various places of the island.  On the other hand they created the greatest alloys from Gerakari to Myrtidia and Kapsali, reforesting the island. Now, especially after the catastrophic fire of August 2017 we can understand the great value of those trees.

The ancient Asclepieion, i.e. hospital,  in the valley south of the church, was referenced next with the presentation of findings which are on display at the Archaeological Museum of Kythera, and noted the mysterious coincidence to build the new Hospital in the same area. A short video showed the first official visit of the Holy Head, Agia Kara, at the new Hospital escorted by Metropolitans and the clergy.

Special emphasis was given to the magnificent celebrations of the past where nearly the whole of Kythira would show up, as happen on the 12th of May 1930, where approximately 5-6 thousand people gathered, as was documented in newspapers of the time, to honour the benefactors Kytherians of diaspora, who had done large fundraisings for the building of the High School in Hora, and the construction of the road towards the port of Diakofti. The narration here was supplemented with excerpts by the papers of the time, but also with the memories of our elderly compatriots, that lived during the time of these festivals.

The social offering of the Saint to Kythera was also shown from two great contributions towards the Kytherian people. First, a large plot donated to the Metropolis, for the building  of camps, mainly for the kids of Kytherian of diaspora, but also the very important donation from the Saint to the Trifylleio Institution, (that supervise the Old Peoples House and the Hospital in Kythira), of the plot on which the new Hospital was built.

Finally, Mr. Mavrommatis summed up and after making clear the importance of the Saint, historically and socially, but also his timely influence and protection of Kythera, showing relevant pictures from damages to the buildings and some neglected fields of the Saint, he noted the current need for renovation of the church, the school, the tidying up of the surrounding fields, and he noted that it is our generation’s duty to assist these projects, as our ancestors done many times in the past.  He also emphasised the requirement of organizing educational visits from the schools, Elementary, Middle and High, so that the new generations will understand and appreciate the importance of our monuments, and they therefore will respect and take care of them in the future.