submitted by Kytherian Religious Consciousness on 02.03.2014

The miraculous icon of Panagia Myrtidiotissa 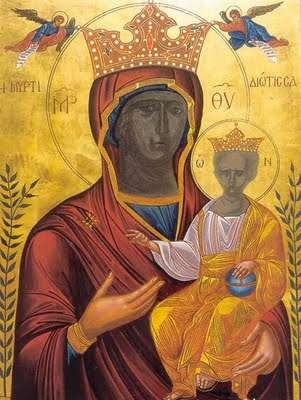 "The Icon of the Most Holy Theotokos "Of the Myrtle Tree" (Myrtidiotissa) is in the monastery church of Myrtides on the Greek island of Kythera. It derives its name from the fact that it was found in a myrtle bush in the fourteenth century.

At that time, a shepherd was tending his sheep in a deserted valley which was filled with myrtle bushes. On September 24, forty days after the Dormition, the Mother of God appeared to him and told him to seek her icon which had been brought to that place many years before.

The shepherd fell to the ground in amazement, praying to the Theotokos. As soon as he got up and turned around, he saw the icon in the branches of a myrtle bush. Weeping for joy, he brought the icon home and told his friends and relatives about how he had found it.

When he awoke the next morning, the shepherd found the icon missing, and thought that perhaps someone had stolen it during the night. With a heavy heart, he led his sheep back to the spot where he had found the icon. To his amazement, he saw the icon once again in the branches of the myrtle bush. Glorifying God, the man took the icon home with him once more. The next morning, it had disappeared just as it had before. When this happened a third time, the shepherd realized that the Mother of God wanted her icon to remain where it had first appeared. 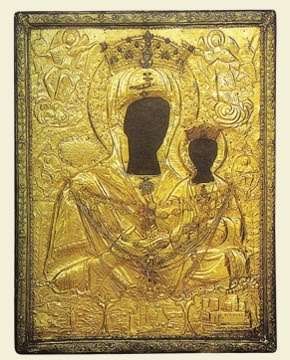 Picture of the original icon of Panagia Myrtidiotissa, Kythera

A small church was built to house the icon, and was called "Of the Myrtle Tree," after the icon. The building was replaced and enlarged over the years, and many miracles took place there.

At the end of the sixteenth century Theodore Koumprianos, a descendant of the shepherd who found the icon, lived in the village of Kousoumari. He was a paralytic, and had an unshakeable faith that the Mother of God would heal him. Each year on September 24 he sent a family member to the church to light candles for him. One year he asked to be carried there by his family so that he might venerate the icon himself. During the Vigil, a great noise was heard coming from the direction of the sea. People fled the church, thinking that pirates were attacking. The paralytic remained in the church by himself, entreating the Mother of God for protection. Suddenly, he heard a voice from the icon telling him to get up and flee. He stood up, and then walked out of the church. Soon he was able to run and catch up with his relatives, who rejoiced upon seeing this miracle. As it turned out, there was no pirate attack, and the noise was regarded as a sign of God's providence so that the paralytic could remain alone in church with the icon. Since that time the Koumprianos family has celebrated the icon's Feast Day with a special reverence, since Theodore had been healed on that day.

Some of the other miracles associated with the Most Holy Theotokos and her icon "Of the Myrtle Tree" include protection of the island from the plague, ending the barrenness of a Jewish woman from Alexandria, saving people from death, and many other great wonders.

Pilgrims come to venerate the icon on the Feast of the Dormition (August 15), and also on the day of its discovery (September 24)." 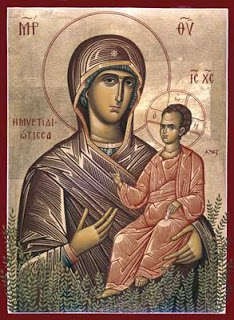 A ship was traveling at sea, when there began a terrible storm. Frigid fear seized the captain and crew. It was not like today. Then the boats were wooden. And they had sails! And the old boat started leaking. The pump worked continuously, but it didn’t do any good, and the boat started to sink. If the ship were lost what good were lifeboats and life jackets? All felt that every hope was lost. And then their minds turned to the Virgin Mary, who is the "hope of the hopeless”.

-Come, Panagia Myrtidiotissa, patroness and protector of our island. Save us. Pity our children and our elderly parents, who are waiting for us! ...

Just before the boat sank, suddenly appeared among them an all-illumined woman who said:

"I’ve come! Don’t be afraid! Your ship will be saved!

And she plunged into the sea with a sponge in hand and closed the hole that had opened on board! In a few minutes, the boat went quiet on his way. They went at the first port they reached for repair. And what a miracle they saw! They saw the hole, which was opened on board, blocked by the sponge that was held in the hands of the Panagia when she appeared in the boat! Everyone saw this miracle. Full of emotion, the captain bought clean wax and made a candle like the mast of the boat. He also brought the sponge that the Panagia had in a box. He also made a small silver boat. And he returned to his homeland, the island of Chios. All went to the monastery of Panagia Myrtidiotissa. And when he went to venerate the miraculous icon, filled with emotion he cried out:

All of them knelt in front of the Panagia. They did their cross in reverence. They thanked her from the depth of their souls, and offered their small gifts, which are kept up till the present day. 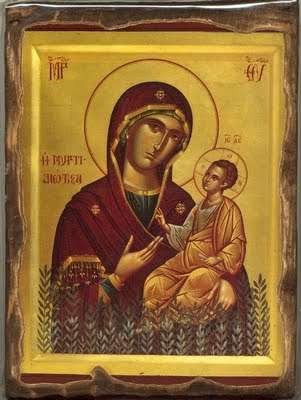 Apolytikion in the Fourth Tone (Amateur translation)
O people now let us clap our hands in faith and sing songs to the Mother of God crying out with fervor, Hail the protection of all those in danger, Hail the salvation of those who honor you with longing, Hail you who granted healing to the paralytic.

Megalynarion (Amateur translation)
Sprinkle your people with divine myrrh, who in the myrtles shown forth wondrously, holy Icon, wondrous and divine, and grant your grace, Myrtidiotissa. 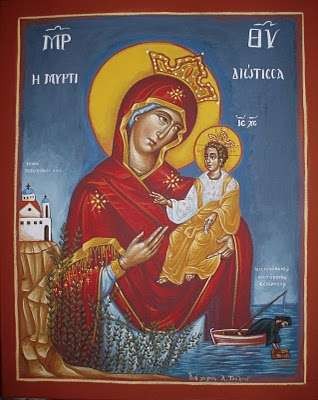