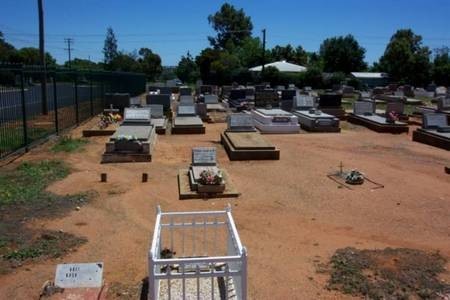 "From the child's crib gravesite - to the Myall Barden Avenue corner in the background, there are 12 rows of graves (even if they do not have headstones, or are non-existent).

In reverse - from the Myall Street/Barden Avenue corner - to the child''s crib gravesite - facing East - there are 12 rows of graves (even if they do not have headstones, or are non-existent).

Once you locate this gravesite - and you look now to the North - again - twelve rows of graves along - (even if they do not have headstones, or are non-existent)- you will find the flat clay marker stone of Ollie Tzortzopoulos's gravesite.