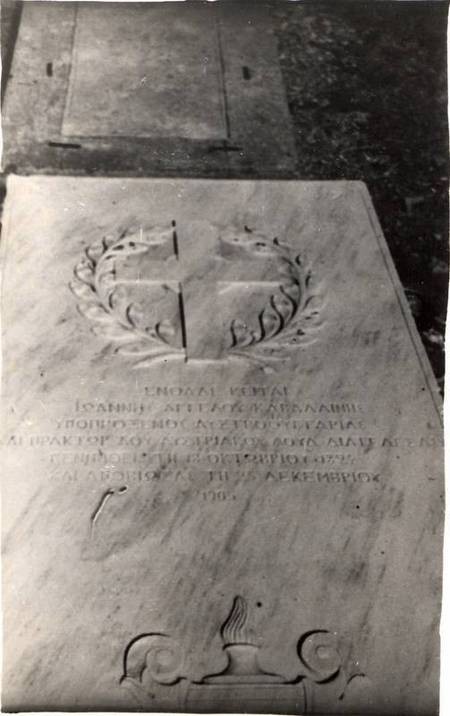 [I am not totally convinced that this is Rosa's gravestone.
The Name at the top reads:
Yannis Angelou Kavallinis
The rest is difficult to decipher - but the date of death at the bottom is clearly 25th December 1905.
The birth date 12th October 1824(?) - would indicate that at least one of the persons interned in the grave is Rosa's second husband - John Cavallini.
Is she interned with him?
I will have to continue to try and decipher the name(s) in the centre of the epitaph.
Can you help?]

The story behind the posting of this photograph to kythera-family.net.

The historical background has been well covered in these 15 entries to date. Also by sophisticated "Hearn" web-sites, cited in the articles above.

My interest in Lafcadio Hearn and his mother was stimulated by a descendant, David Baldwin, who lives in Osaka, Japan. I have become very intrigued by both Rosa and Lafcadio.

David lamented that at least two very important documents had not yet surfaced re: the pair.

I became convinced that endevouring to contact descendants of Rosa's second husband, Giovanni Cavallini, might also be an important first step in obtaining 1. and 2 above.

Briefly: "Giovanni Cavallini was a Kithira Islander of Italian descent, was a man of some standing. He was Ionian Islands' Vice Consul for Austria-Hungary. Prior to that he was a Governor of Cerigotto (sic) during the British Protectorate. His hobby was collecting antiquities.

Four Children were born to this couple on Cerigo Island:
Ziza Cavallini, Catherine Cavallini, Angelo Cavallini (who died in 1947) and George Cavallini b. March 25, 1872."

When I was researching a completely different matter on the net - I stumbled, upon a reference to 12 photographs held at:

The Chief Archivist informed me that

"Photo's of interest were:

In addition to the photographs of Rosa Cassimati's tombstone and her girlhood home, Box 7 Folder 16 also contains a photograph of the home of Rosa's son John Cavalinni and two general views of Kythera and Kapsali Bay (one with a cross to show the location of Rosa's home and one showing
the location of her son's house). There are two different views of the tombstone- one showing the entire tombstone and one
showing the inscription. There are also two different views of Rosa's girlhood
home."

How, I asked did these photographs come to be in the possession of Ohio State University, and originally, in the posssession of the donor, Dorothea McClelland?

"Dorothea McClelland became interested in Lafcadio Hearn's writings, in part because they reminded her of her childhood years spent in Japan.
Because of her interest, she made a study of Hearn and collected numerous materials related to him.

While looking for information on Hearn's mother, McClelland corresponded with
a Mr. Anthony J. Stathis in Kythera, and he sent the photographs to her."

Now this is where the investigation becomes really exciting, and where all the possibilities that can be opened up by the nature of kythera-family.net become apparent. We are now entering into 3rd and 4th stage levels of research.

1. Does anyone have information about
Giovanni Cavallini?

2. Does anyone know the whereabouts of the descendants of Ziza Cavallini, Catherine Cavallini, Angelo Cavallini and George Cavallini?

3. Does anyone know the whereabouts of the descendants of Alkiriades
Lastiotis, husband of Ziza Cavallini, and Mr. Petroheilou, husband of Catherine Cavallini?

4. Does anyone know the history of, or is anyone a descendant of, the mysterious Mr. Anthony J. Stathis, who originally sent the photographs to Dorothea McClelland in the first place?

Unfortunately the cost of obtaining each photograph is US$39.

It is not a policy of kythera-island.net to pay for material. That would establish a bad precedent, which would inevitably lead to the economic demise of the site.

However, my personal curiosity has become overwhelming, and I have sent the funds off to purchase two (2) of the photographs;

1. the gravestone of Rosa, with inscription

These have now been posted to the web-site.

If these prove helpful in illiciting further information, then I suspect, I will find a means to purchase the remaining 10 photographs.

CAN YOU HELP? IF YOU WOULD LIKE TO CONTRIBUTE US$39 IN ORDER TO PURCHASE ANOTHER PHOTOGRAPH, PLEASE EMAIL ME BY CLICKING ON MY NAME (IN GREEN) AT THE TOP OF THIS ENTRY, AND I WILL PROVIDE YOU WITH MAILING DETAILS.

In the meantime would descendants of Giovanni Cavallini, Alkiriades Lastiotis, Mr. Petroheilou, and Mr. Anthony J. Stathis, please post any information they have onto kythera-family.net?

I would like to thank the Iowa State University Library/Special Collections department, in particular Melissa Gottwald, Collections Archivist, for supplying this photograph, and allowing us to reproduce it at kythera-family.net.

I would like to thank the site because it helped me with a paper I delivered last week at the 10th Panionian Conference. The topic being "Kythira-Smyrna: The steamboat connection between two places during the 19th century and their unknown perspectives" Rosa's name found its way into all. After research I have concluded that Rosa is NOT buried, as most believe, in the Angelo Cavallini tomb in the Sait Spyridon of Kapsali cemetery but was, most likely, buried in Corfu where she died. If she had been buried in Kythira she should have been mentioned on the gravestone, as her (second) husband died much later than her. No such thing. The Corfu Mental Hospital Archives do not report any final resting place, but as she died in 1882 even if she had been buried in the city of Corfu cemetery her grave is propably lost. Again I'd like to thank all contributors to the site which helped me with my research.-