A version of this article appeared in print on June 12, 2012, on page A1 of the New York edition with the headline: Greek Antiquities, Long Fragile, Are Endangered by Austerity. 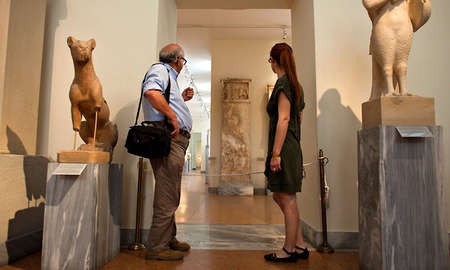 A closed room at the National Archaeological Museum. (Aris Tsaravopoulos and Gely Fragou at the door).

Photo by: Eirini Vourloumis for The New York Times

KYTHIRA, Greece — A jarring public-awareness ad that has appeared recently on Greek television news shows a little girl strolling with her mother through the National Archaeological Museum in Athens, one of the country’s cultural crown jewels. The girl skips off by herself, and as she stands alone before a 2,500-year-old marble statue, a hand suddenly sweeps in from behind, covering her mouth and yanking her away.
Multimedia 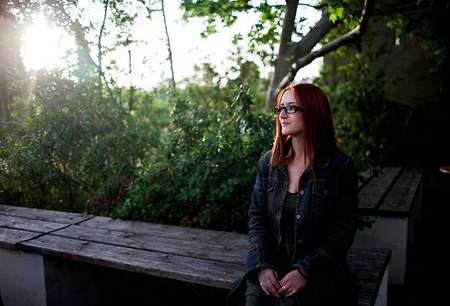 Gely Fragou, a 31-year-old Greek archaeologist. She last had government work in 2010. She said that several friends have taken day jobs to make ends meet: One works in a bakery, another on an assembly line, and a third as a trash collector in Athens.

Through regular retirements and attrition over the last two years, the archaeological staff has shrunk even more, to 900 from 1,100, according to the association, the union that represents the archaeologists.

At a time when taxes are being raised, pensions are being cut and the national unemployment rate stands at more than 21 percent, this exodus has faded quickly into the bleak economic landscape. But scholars say the cuts are beginning to cause precisely what the television ad dramatizes: the disappearance of antiquities. The primary culprits are not museum robbers and looters of antiquities sites, but two even more treacherous forces that now have fewer checks on their power: the elements and developers’ bulldozers.

In a dry riverbed one late April morning on the island of Kythira, Aris Tsaravopoulos, a former government archaeologist who was pushed out of his job in November, pointed out a site where a section of riverbank had collapsed during a rainstorm a few months earlier. Scattered all along the bed as it stretched toward the Mediterranean were hundreds of pieces of Minoan pottery, most likely dating to the second millennium B.C., some of them painted with floral patterns that were still a vivid red.

Mr. Tsaravopoulos, who directed archaeological projects and supervised foreign digs on the island for more than 15 years, said he believed the site might be part of a tomb or an ancient dumping ground. (Extensive digs in the mid-1960s by British archaeologists helped establish that the island was a longtime colony of Minoan Crete.) The collapse of the bank had already caused some of the artifacts to wash out to sea. Filling the pockets of his khaki vest with larger pieces of pottery to date and place in storage, Mr. Tsaravopoulos said, “The next big rain will carry away more, and before long it will all be gone.”

In years past Mr. Tsaravopoulos would have organized an emergency dig at such a site. Now, he said, he can no longer do anything but alert already overburdened colleagues in the state archaeological service, with little hope any rescue work will be done in time: Since his forced retirement last fall, Kythira, a sparsely populated island slightly larger than Malta and six hours southwest of Athens by ferry, had not been visited by a government archaeologist.

Of course, long before the economic meltdown, sites were lost or poorly kept, partly as a result of the immensity of the task of preserving the county’s past. In Kythira alone, there might well be dozens of such unexplored sites; the Greek truism that you can’t turn a corner without tripping over an antiquity often seems almost literally true. (The country has 19,000 declared archaeological sites and monuments and 210 antiquities museums.)

“I believe that this ministry could double or triple the number of archaeologists it hires — and the number of guards — and still be understaffed,” said Pavlos Geroulanos, Greece’s culture and tourism minister until the May 6 elections brought in a caretaker government. Mr. Geroulanos has overseen the layoffs and forced retirements as his annual operating budget has dwindled 30 percent over the last three years. “There’s so much out there, and so much work to be done,” he said.

But now Greece’s already hidebound and inefficient archaeological bureaucracy, for years among the largest in Europe (where the state plays a central role in the field in many countries), is confronting a drop in resources so sharp that it is beginning to cede the responsibility for cultural heritage it has had for more than 150 years.

In Messenia, on the Peloponnesian peninsula, excavation work has come to a halt on a fifth- or sixth-century B.C. mountaintop temple discovered in 2010 not far from the well-known Temple of Epicurean Apollo, a Unesco World Heritage site. Xeni Arapogianni, the state archaeologist who oversaw the region and directed the initial excavation of the newly discovered temple, was forced into early retirement last fall before she could complete research for publications about the find.

“There’s still work that needs to be done there, but no one goes to do it,” Ms. Arapogianni said in an interview. “A department cannot function without a director.”

She added that the temple was not important simply as another place that might someday dot a tourist map but because the history of fifth-century temple cults in the region is still an emerging field of research, and the site could provide crucial insights. “This is not just another temple,” she said.

To many Greek archaeologists and university colleagues from other countries who dig with the government’s permission, an even more troubling repercussion of the austerity budget is that research leaves of absence for government archaeologists are being canceled, and money for their research excavations is no longer being provided unless they can find other sources to share the cost.

One effect is that Greek archaeologists are being pushed to focus almost exclusively on the more bureaucratic side of their jobs: inspecting construction sites for the presence of buried antiquities. It is a crucial task, but one that, even with the slowdown of development during the crisis, consumes almost all their time now. This means that scholarship is put on indefinite, and in some cases probably permanent, hold.

An American archaeologist with decades of experience in Greece, who spoke on condition of anonymity for fear of alienating government officials at such an uncertain time, said: “Nobody in Greece digs nearly as much as the government archaeological service. And if they aren’t able to publish what they find, they might as well not be doing it at all; they might as well just rebury it.”

Despite its relatively low pay, the profession of archaeology has long been held in high esteem in Greece; it is a job that children aspire to, like becoming a doctor. And in a country where the public sector has been plagued for decades with corruption, archaeologists have retained a reputation as generally honorable and hard-working.

“They used to say that we were a special race,” said Alexandra Christopoulou, the deputy director of the National Archaeological Museum. “We worked overtime without getting paid for it — a rarity in Greece — because we really loved what we did.”

Veteran Greek archaeologists tend to view the crisis with a grim resolve to make do with the resources at hand. But many in the next generation are unable to do even that. The archaeological service has all but stopped hiring, and the hundreds of young archaeologists who work on part-time contracts are finding those contracts renewed more infrequently.

Gely Fragou, a 31-year-old Greek archaeologist trained at the University of Southampton, in England, worked for several years on short government contracts, but the last one expired in 2010. She continues to hope for work, but she said that several friends have taken day jobs to make ends meet: One works in a bakery, another on an assembly line, and a third as a trash collector in Athens. “If it wasn’t for my family,” she said, “I would have left Greece.”

Mr. Geroulanos, who served as the culture minister for two and half years, an unusually long stretch amid Greece’s shifting political alliances, said the deep staff cuts were unavoidable in order to make the strongest case that his ministry could live within its means, as the rest of Greece is now having to do.

“We’re at a time now,” he said in an interview in his office in Athens, “where I can safely say that every dollar given to the ministry will be well spent.”

Even with the ministry’s budget falling every year of his tenure, he said, it has been able to complete important projects, like modernizing the facilities at more than 100 publicly accessible ancient sites. Over the last three years Greece has also managed to compete successfully for tens of millions of euros from the European Union available for archaeological projects.

But critics of austerity say these few bright spots pale against the irreversible damage already under way.

On the island of Kythira, Mr. Tsaravopoulos recently visited a plot of sparsely wooded field, acting on a tip from a friend that a bulldozer had been at work there without a permit or antiquities inspection. He arrived to find a makeshift dirt road freshly carved into a hillside, scattered with dozens of broken pieces of glazed pottery dating to Hellenic and early Roman times.

As he was leaving, the owner of the land arrived with his family, and he and Mr. Tsaravopoulos, who knew him, had a curt discussion in the middle of the road before the man walked on.

“He told me he didn’t realize he’d damaged any artifacts and that he was sorry,” Mr. Tsaravopoulos said later. “Then he told me very nicely: ‘Oh Aris, I heard the news that you had to retire. I’m very sorry about that.’ He knows that I have no power anymore to prevent people from digging wherever they want.”


A version of this article appeared in print on June 12, 2012, on page A1 of the New York edition with the headline: Greek Antiquities, Long Fragile, Are Endangered by Austerity.