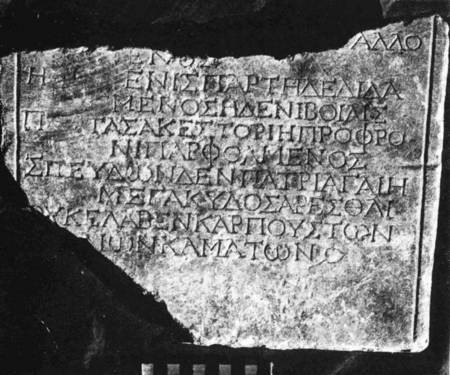 Kythera: Excavations and Studies conducted by the University of Pennsylvania Museum and the British School at Athens.

A Metrical Inscription
by, W.G. Forrest.


During the excavations in Kythera in 1963, the following inscription was brought to the dig house by a workman. I have not seen the stone myself, and am grateful to Professor Huxley and Mr A Papadopoulos for many of the details.

Two shallow channels have been cut at left and right to make margins ·012 wide. At the bottom there is an unmarked margin of ·065.

{For PC-users: To read the lines below in Greek (not including "hedera")
- copy this text from web-site
- paste to a word document on your computer
- convert the font to "Symbol".
The lines will then appear in Greek.
Repeat later - if you wish to read the text in Greek from Lucian's Apokritomenos.}

The lettering, which I should place in the second century A.D., is a little rough, but without some pretensions to elegance, and much the same may be said of the style and indeed of the sentiments. Note for example, the ambiguity, presumably deliberate, of the last line = 'the physician did not win the kudoV (kithos} for which he had hoped', but equally 'the physician could not heal himself'. Trite, but for Kythera, quite sophisticated.

The latter's fate was rather less drastic than the former's. But even if our Kytherian believed, as one feels he did, that Sparta and Boiai between them had provided the best of educations, one cannot help wondering what sort of medical studies could be practised in either. Both boasted temples of Asklepios (Boiai - Paus. 3.22.13; Sparta-Paus. 3.14.2; 14,7), but neither is known to have been much of a medical centre; most probably the Kytherian had merely attached himself to some local practioners in the standard way.