History > Archive/Research > A Flag for Kythera. Proposal 1. Proposal utilising one of (wo)mankind's most ancient, primal and powerful symbols.

A Flag for Kythera. Proposal 1. Proposal utilising one of (wo)mankind's most ancient, primal and powerful symbols. 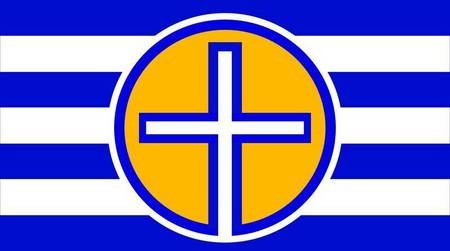 The original symbol for Aphrodite - Venus (Venus is the Romanised version of Kythera's Aphrodite).

To appreciate the power and primal nature of this symbol - go to:

This is also the symbol used by astronomers to designate the planet Venus (Aphrodite).

Symbols as the prime form of human communication

At every level of that heirarchy appropriate symbols of power and authority can serve to empower the individual, and to validate his or her core values and identity.

Individuals alllow certain artefacts to "stand in the place" of a sense of collective empowerment. This process occurs at levels of the political heirarchy.