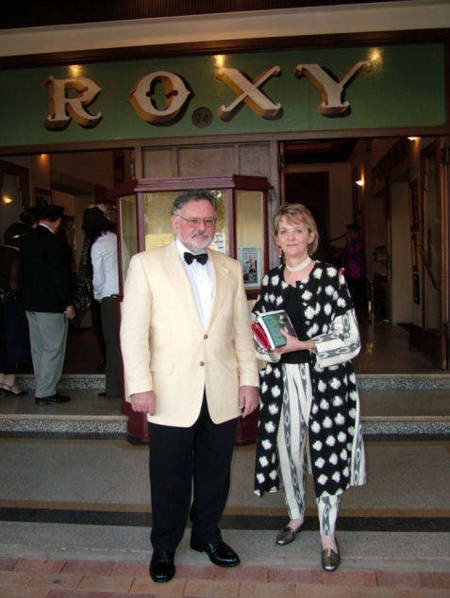 'Katsehamos and the Great Idea' by Peter Prineas,

An address given at the book launch,
Roxy Theatre, Bingara, April 1, 2006
by Associate-Professor Janis Wilton,
School of Classics, History and Religion,
University of New England, NSW.

'Katsehamos and The Great Idea' is an engaging book that taps into topics and experiences which are close to my own passions. It pulls together family history, immigration history and local history. It provides strong portraits of individuals, their personalities, desires, frailties, failures and achievements. It locates Australian experiences in a broader world context, especially a context which links to Greece and to events in Europe. It offers strong descriptions of different places. It utilises oral histories, government records, newspaper articles, family photographs and other memorabilia. And, above all else, it is easy to read and engaging.

The focus is the Roxy Theatre in Bingara, north-western NSW, but, rather than dominating the book, the Roxy provides an anchor for exploring topics like the lives and experiences of the three men responsible for building the theatre, the nature and networks of Kytherian immigrants both in and beyond Australia, and the place of cafes and cinemas in the political, social and economic life of Bingara.

Let me give you a taste of the range, depth and style of the book and of the ways in which Peter has woven his account of uncovering the various stories with the stories themselves.

The book begins in Kythera with Peter describing his first encounter with his ancestral island and the family village of Mitata in the 1970s. The landscape, the feel of the place, the colours and contours come through.

'Mitata, my family's village, is high up in the centre of the island. It sits on the edge of a plateau above a verdant ravine filled with orchards and garden and watered by an unfailing spring. From the village square or plateia you can look down on lemon trees and funereal cypresses, and follow the line of the dry watercourse as it passes beneath the hill of Palaiokastro to the olive groves at Palaiopolis and the sea.
Mitata was a village of closely-set stone houses with tiled roofs, the narrow streets converging on the plateia and the great domed church of Aghia Triatha. Around the plateia or not far from it were a couple of kafenia, while the school and the municipal building stood a little distance away. There were many empty houses, some of them falling into ruin, but many were lived in and cared for, their rubble walls sealed with cement and whitewash, the wooden doors and shutters painted an innocent blue.'

This is a style repeated throughout the book - different places in the story get evocative descriptions of their natural and built environments.
'At Manilla, and north through Barraba and Bingara, the country is like a great ramp descending from the high tableland of New England to the western plains of New South Wales. It is hill country, warmer and drier than New England, with good grazing land marked out by box trees and red gum, while the barren ridges and stony hills carry ironbarks and white cypress. The Namoi flows beneath tall river oaks, river red gums and twisted angophoras, and as it makes its way west the river passes the volcanic spires of the Nandewar Range. Tall trees grow on the high ridges there, forests of silvertop ash and manna and mountain gum, and ghostly snow gums haunt the peak of Kaputar.'

These are the perceptions and words of a person well versed in viewing and treasuring our environment. They reflect very much on Peter's life and work in nature conservation. His earlier books include Wild Places and Colo Wilderness.
Chapter two is set in America. Peter went there in search of the records and experiences of his grandfather and other family members who migrated to the United States early in the twentieth century and before eventually migrating to Australia. In this chapter - as elsewhere in the book - there are reflections on the challenges facing family historians as they disentangle family myths, contradictory evidence, and silences. For example, is the Panayiotis Firos who appears in the American immigration records, Peter's grandfather or someone else with a similar name? Why do family members give different accounts and dates of their migration experiences at different times? is this to do with illegal immigration, faulty memory, changing stories to fit changing circumstances? Peter speculates and offers answers.

Peter also mines his sources to create a sense of the personalities of individuals central to his story. For example, he provides the following description of his great uncle Philippos Feros drawing partly on 1910 shipping records held in the United States:

'A few years older than his brother Panagiotes, Philippos was a strong man with the build of a wrestler. He had been a sailor with the British Merchant Service. He had served in the Greek Army. He knew his way around. The carefully formed script of the passenger manifest is disturbed in several places by what may be Philippos' insistent hand. He would not have his name spelt 'Fyros'; it is struck out and 'Firos' written in its place. Later, following his brother Peter's example, he would change the spelling to 'Feros'. He would not be described as a 'workman'; this was struck through and 'sailor' written in its place. Nor would he allow anyone to demean his financial standing; where '$25.00' had been written as the amount of cash in his possession, this was crossed out and '$38.00' written instead.'

Another important feature of the book is the amount of detail given on the impact of wars in Europe, the military service of family members, and the importance of ongoing connections to Kythera. Migration to Australia did not mean cutting off ties with home: wives and children often stayed behind in Kythera, visits home were desired and expected. Indeed, it was while Panagiotes Firos (Peter Feros) was on a visit to his family in Kythera that his two partners in Peters & Co here in Bingara, decided to expand and get the building of the Roxy complex underway.

Peter's excursion into what he labels at one stage 'the cinema wars' is particularly revealing. He provides background on the open air cinema created in Bingara in 1912 by William Finkernagel and John Veness, the demise of that cinema through Victor Peacocke's creation of the Regent Theatre in the Soldiers' Memorial Hall, and then the campaign by Peacocke to sideline the Roxy Theatre development. Into the mix go anti-Greek sentiments, lobbying of government agencies, and a newspaper advertising campaign.

There are also fond and evocative memories of the entertainment offered through the Roxy, the food served at the local cafes, and the interiors and staff of those cafes. There is a detailed account and description of the building of the Roxy, its features, its programs, its failure as a business enterprise for its three founders and its subsequent history. There are also details about what happened to the Roxy's founders after the failure of their business enterprise.

These are but small tastes of what the book has to offer.

It is a book that provides insights into local, family and community history. It evokes the loneliness and challenges of migration. It portrays life in Bingara in the 1930s. And it reveals the passion and commitment of its author in his journey of discovery into his own history and heritage, and his willingness and ability to share the fruits of that discovery with a wider audience.

It is my honour and pleasure to launch 'Katsehamos and the Great Idea' written by Peter Prineas as part of the celebrations to mark the seventieth anniversary of the Roxy Cinema and as an acknowledgement of the important contribution made not just by Peter Feros (Katsehamos), George Psaltis (Katsavias) and Emmanuel Aroney (Theodoropoulos), the founders of the Roxy, but by all Greek immigrants who, particularly during the first part of the twentieth century, contributed significantly to the services and lifestyles available in towns throughout regional Australia.

Katsehamos and the Great Idea is also available in the New England and Northwest region of NSW, from the Roxy Theatre, Maitland Street, Bingara.
Phone: 02 67240003, or
email here