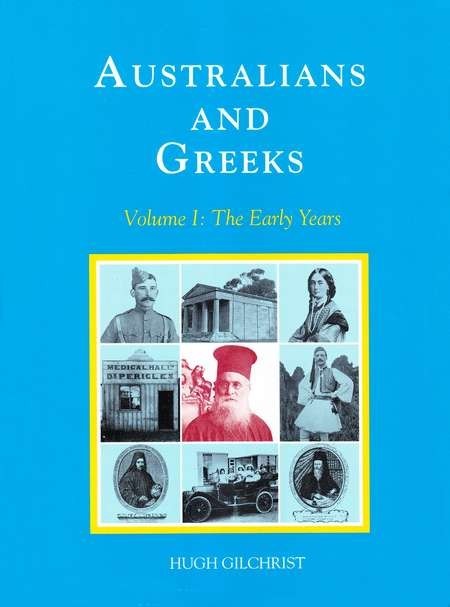 Price: A$60 each incl GST + $10 postage for up to three books, including air post and packaging to anywhere in the world.

Description:
Volume 1, The Early Years, detailed and richly illustrated, picks up the story from the very beginning: the ancient Greeks' conceptions of a great continent far to their south. Centuries later, in Australia's convict era, the first contacts are made, paving the way for an influx of gold-rush immigrants, and a pattern of gradual settlement until the eve of World War 1.

Pirates, pashas and paramours, aristocrats and adventurers: all aspects of Greek-Australian inter-relations are recounted - the perceptions, historically, each of the other; the forging of cultural, economic and political links between the two. Immigration, settlement, religion, sport, agriculture, politics: the whole gamut of the Greek-Australian experience is explored, comprehensively, informatively. It is a vital account.

Unearthing many previously unknown documents and photographs, and amply documented to assist the interested reader and future researchers, Hugh Gilchrist's book is a landmark in Australian studies and the life of the Greek community.


"It testimony to the quality of these works, that all three volumes of Australians & Greeks, have remained in print, since the date of publication."

All three Volumes of Gilchrist's monumental work can be purchased from the contacts above.