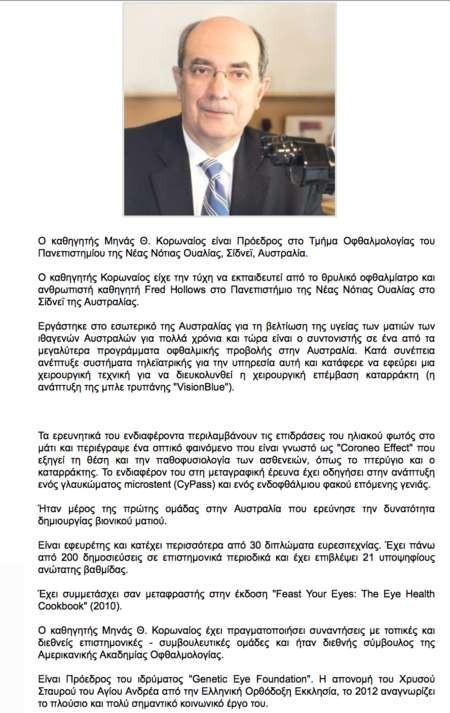 advising him of his award. He was one of two candiadtes chosen from Kythera, along with Dr Manolis Kalokerinos, at the 3rd Presentation of Ionian (Eptanisian) Union of Greece, Awards.

Invitation to Minas Coroneos to attend the ceremony to receive his award:

The awards ceremony takes place as an expression of respect and pride for Ionians who have excelled in various fields (art, science, culture, etc.) and helped to highlight their place of origin in their own special and unique way.

Consequently, we inform you that unanimously we have chosen among 14 personalities from the Ionian Islands, you Minas Coroneo from the island of Kythera, based on the undeniable recognition that you are one of the most distinguished ophthalmologists in the world. We would be deeply and emotionally honoured to have you and your present at the awards ceremony. 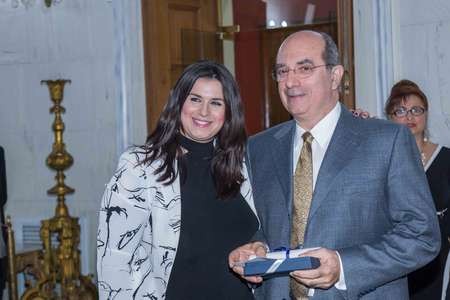 Please be advised that the IONIAN UNION of GREECE to further honour the winners will proceed to create a private collector's stamp - of philatelic value - through the Hellenic Post Office - in the form of a special commemorative series. (A day cover, will utilise your photo, and to be allocated to you).

Hoping for a the positive response to our invitation. Thank you in advance, and wish you every personal and professional success.

The Board of IONIAN UNION of GREECE

On Sunday afternoon members of the Ionian Union gathered in the centre of Athens to honour Ionians who have made Ionia (the Eptanisian (seven islands)) proud. For the 3rd year, Old Parliament House, hosted in its imposing hall representatives of the the arts, sciences, and entrepreneurship. From Corfu in the north to Kythera, in the south, Paxos, Ithaca, Lefkada, Zakynthos, and Kefalonia.

They brought together all the leading Ionians who in their professional pathways have managed to make the Ionian Islands a proud and innovative place, and put on show the ‘values and greatness of our island’. The evening began with the greeting of the Union of the Ionian Islands president, Helen Konofaou and poetic rendition entitled "flashed light and how the young person came to know himself”. It was directed by Peter Gallia with Giorgos Vlachos, Katerina Georgakis and Petros Gallia.

Vicky Leandros from Corfu was the first to receive her award. Vicky is a grand and consummate artist, but one of great modesty. She worked alongside Hector Botrini. She said, it all started in Corfu when they built their first restaurant – the wonderful Etrusco. The packed room then waited impatiently for the presentation to Paxos. This was because the award to Paxos was to be presented to Christopher Papakaliatis. The premier of his avant-garde second film "Another World” had occurred just a few days before. The audience delighted in Christopher’s success. He talked about returning to Paxos. About his childhood trips to the island, and the nostalgia. What can you say about the other award for Paxos? Spyros Katsimi. The journalist, writer. The words would be few.

Then it was the turn of Lefkada. And the whole room applauded interminably on hearing the name of Elias Logothetis, of Froufalou, in Lefkada. Although the award was for all the Ionian Islands ..., he said, with his unique brand of humour has, his heart was pounding in Lefkada. The award was received by the deputy of the Cultural Centre, Spyros Arvanitis.

The next award from Lefkada was for a man who is deceased, but still helps and supports, always during the difficult times for Lefkada and Greece. One of these was the recent earthquake. And it was none other than the late Spyros Sklavenitis, owner of the super market SKLAVENITIS. Lefkada was always the dearest place in his life. He passed on his love for Lefkada to his children, who today continue his work. His daughter Maria obviously moved, received the award and spoke of the ‘father of Lefkada’, from the heart. "We will always be next to Lefkas, she said, because we learnt our love of Lefkada from our father. “This even though we grew up in Piraeus; we feel that our life begins from Lefkada ". The award was presented to Maria Sklavenitis by MP Thanassis Kavvadas.

This year Kefalonia honoured Akis Tselenti. Akis is a Seismologist. "The earthquakes should be our friend there in the Ionian islands”, he said. “Thanks to earthquakes we have these beautiful beaches” He also spoke about the dignity of the Cephalonian against the devastating passage of Enceladus. Second Cephalonian to be awarded was Thanos Ascetic, a neurologist, and a psychiatrist specializing in sexual health issues.

Ithaca awarded the teacher John Karantzi – and a doctor and healthcare worker who had excelled abroad, Constantine Rosolymo. Zakynthos honoured a woman who was well received. The businesswoman Vagionia Stasinopoulou. The owner of Empnefstria which sells ‘fresh’ cosmetics, through 250 stores around the world. The business was begun utilising simple recipes from her Zakynthian grandmother.

A moving moment for audience occurred when the mother of the second Zakynthian awardee, the internationally famous tenor, Thimou Flemotomou, received the award for her child, thanking the organizers profusely.

Manolis Kalokerinos, for years the President of the Panhellenic Medical Association and director of the First Surgical Clinic of the General State Athens, from Kythera, needs no introduction. "It's our doctor," exclaimed those who came to the old parliament to honour him. And that was enough to distinguish this great personality from ‘Tsirigo’. Kythera also honoured the great scientist in the field of ophthalmology, from Australia, Minas Coroneo, who has performed extraordinary work in the field of the bionic eye.

An award was made also to the benefactor of the classical music festival Paxos - late Englishman, John Gough. Gough possessed the vision to begin this unique festival 26 years ago. The award was presented to the organiser of the festival, Eleftheria Arvanitaki.

The master of ceremonies for the event was journalist Peter Koumplis.