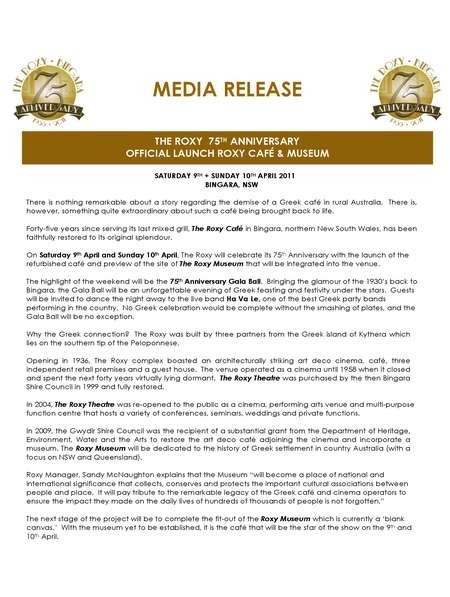 Upload a pdf version of the Media Release, here:

There is nothing remarkable about a story regarding the demise of a Greek café in rural Australia. There is something quite extraordinary however, about such a café being brought back to life.

Forty-five years since serving its last mixed grill, The Roxy Café in Bingara, northern New South Wales, has been faithfully restored to its original splendour.

On Saturday 9th April and Sunday 10th April, The Roxy will celebrate its 75th Anniversary with the launch of the refurbished café and preview of the site of a museum that will be integrated into the venue.

The Roxy was built by three Greek partners from the island of Kythera. Opening in 1936, The Roxy complex boasted an architecturally striking art deco cinema, café, three independent retail premises and a guest house.

The venue operated as a cinema until 1958 when it shut down and spent the next forty years virtually lying dormant. The Roxy Theatre was purchased by the then-Bingara Shire Council in 1999 and fully restored.

In 2004, The Roxy theatre was re-opened to the public as a cinema, performing arts venue and multi-purpose function centre that includes a variety of conferences, seminars, weddings and private functions.

In 2009, the Gwydir Shire Council was the recipient of a substantial grant from the Department of Heritage, Environment, Water and the Arts to restore the art deco café adjoining the cinema and incorporate a museum.

The museum will be dedicated to the history of Greek settlement in country Australia (with a focus on NSW and Queensland). It will become a place of national and international significance that collects, conserves and protects the important cultural associations between people and place. It will pay tribute to the remarkable legacy of the Greek café and cinema operators to ensure the impact they made on the daily lives of millions of people is not forgotten.

The next stage of the project will be to complete the fit-out of museum which is currently a ‘blank canvass.’ With the museum yet to be established, it is the café that will be the star of the show on the 9th and 10th April.

What is particularly unique about the café restoration is the number of fixtures and fittings from the original café that have been brought back to life. Wood paneling, mirrors, cubicles, tables and chairs, as well as the spectacular neon sign that hung under the awning in the 1930s, have all been reinstated.

Greek cafés changed the course of Australia’s cultural history and left a significant legacy on our culinary and cultural landscape. Very few Greek cafes operate as they did 50 years ago. Even fewer complexes that incorporate a functioning cinema and café remain. Once complete, The Roxy may be the only original purpose built theatre with adjoining café operating in New South Wales, possibly in Australia.

The town of Bingara has a great deal to celebrate by launching the café. It is important to note, that while the doors to the café will be thrown open to the public over the April weekend, it will not begin trading commercially until a later date when a suitable operator has been appointed.

The shared narrative of The Roxy’s history exemplifies the Greek migration experience: one that made an outstanding contribution to the development of Australia. It is therefore fitting that following the official launch of the café, a Gala Ball be held. Bringing the glamour of the 1930’s back to Bingara, the Black Tie Gala Ball will be an unforgettable evening of Greek feasting and festivity.

Paying homage to Hollywood’s Golden Age, a superb selection of screenings will light up the silver screen over the weekend. Highlights will include well-known actor John Wood presenting the television episode he filmed featuring The Roxy, as well as the first film ever screened at The Roxy opening in 1936. Roberta, starring Fred Astaire and Ginger Rogers.

The 75th Anniversary Celebrations on the 9th and 10th April will be a step back in time into Australia’s future by celebrating an icon to be enjoyed by generations to come.