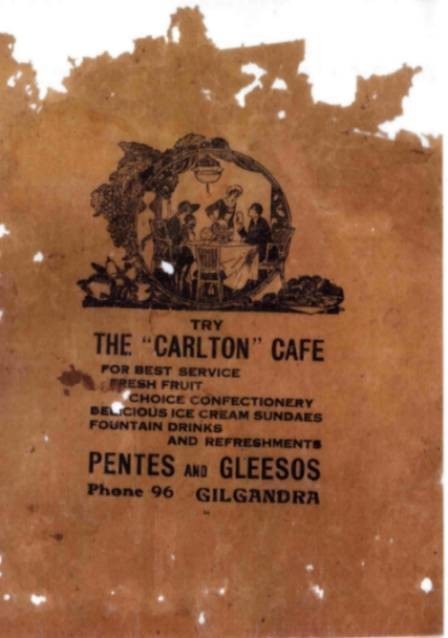 I found this paper bag in the Gilgandra Rural Museum - not to be confused with the Coo-ee Heritage Centre just up the road - in November, 2005.

Partially destroyed by silverfish, it has subsequently been laminated - thus, preventing further damage.

John Sklavos, adopted his Kytherian parachoukli (nickname) - "Pentes" - as his Australian surname. Supposedly it was easier for the Australians to pronounce. John Pentes - was always known as "Jack".

Jack was born in the town of Mitata, Kythera. He had arrived in Gilgandra in 1929, and purchased the Carlton Cafe - previously known as the Gilgandra Tea Rooms, from an English lady. This was located at 33 Miller Street, Gilgandra.

The English Tea Rooms, origin and "style", is clearly evident from art work on this paper bag.

Jack married Stavroula Flaskas, from the town of Kythera, Kythera. Jack and Stavroula worked the Cafe for 10 years. Catherine Pentes recalls that "...the crockery from the Carlton was a heavily glazed white, adorned with a crest - green with white background, with the name Carlton Cafe, Gilgandra written in pink".

In 1939 - Jack sold the Carlton to George Peter Psaltis, who was from Potamos, Kythera. George soon after changed the name of the cafe to the Monterey.

Gilgandra. NSW. The Kytherian presence in the town. PART ONE

Gilgandra, NSW. The Kytherian presence in the town. PART TWO

Peter Tsicalas makes reference to, the fact that Jack Pentes traded as Pentes & Gleeson (in fact Gleesos), initially, at least, through to 1931.

Peter couldn't determine who Gleeson was, but coincidentally Stan Gleeson (Stefanos/Efstathios/Efstratios Emmanuel Glytsos) spent about 9 months at 'nearby' Binnaway after landing in 1924. He moved on to settle permanently at Kyogle - and married Katina Coroneo in 1932. Andrew Mina Glitsos also landed in 1924 and spent 9 months in Gilgandra, amongst other places, before settling at Manilla.

Questions remaining to be answered, however, include:

Can we obtain more information about the mysterious Mr Gleesos?

Can we determine conclusively that Stan Gleeson is the same person referred to as Gleesos on the paper bag above?

When did the partnership between Jack and Mr Gleesos cease?