History > Documents > Seal of the autonomous state of Kythera

Seal of the autonomous state of Kythera 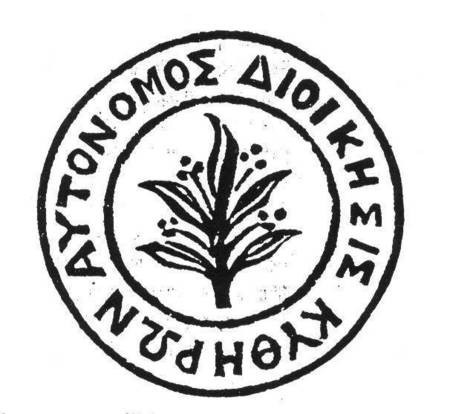 "During WWI, Venizelos completely disagreed with the neutrality forced upon Greece by foreign interests. He started a revolutionary movement, and Kythera declared its independence. The events, although shortlived, are of historical importance and should be mentioned.

The revolutionary movement, initiated and headed by Venizelos as its President, had Panagiotis Daglis and Admiral Paul Koundouriotis amongst its members. The representatives of the Cretan administration, Karapanos, was sent to the island. At a gathering organised at Potamos, the people of Kythera pledged allegiance to the new government of the national Defence, which proclaimed Thessaloniki as its new capital. Kytherian public servants were called upon to pledge allegiance to the new government. Photographs of the King were removed from public places, and replaced with those of Venizelos. A small number of opposing Kytherians were arrested and exiled to Crete.

Foreign pressure brought about by the allies succeeded in getting agreement between the two governments of Athens abd Thessaloniki. Kythera was to be returned to the government of Athens. To maintain the peace and help with the transition of power, a small British garrison wasto arive on 12th February, 1917.

Although the British were welcomed by the people, the idea of a royalist government taking over the island was not well received. The municipal councils were summoned to Potamos on Thursday, 5th March, 1917, at 11:00 am, and Kythera was declared an autonomous state, with Panagiotis Tsitsilias as the Governor.

Potamos was to be the capital of the new independent state, and all public servants were to swear alligiance to its government. With the uncertainty of this new regime, many public servants, clergy, teachers, and others were convinced of an imminent conflict pointing to an explosive situation.

A new meeting was called at Potamos on 23rd March 1917, to re-evaluate their position, and the community leaders decided to ask the government at Thessaloniki to take charge once again of the island's affairs.

The life of the independent state came to an end when on the 3rd April, 1917, thirty-five police officers from Crete arrived, and law and order was restored. King Constantine was forced to leave Greece by the end of May 1917, and Venizelos formed a new government saving the nation from the calamity of a civil war."

From, Peter D Vanges, Kythera. A history of the island of Kythera and its people. Published and distributed by the

"Early in 1917 several elderly Greek-Australians played an unlikely role as repatriated citizens of Kythira in a miniature politico-military drama.

At that stage of the war, Britain's "Military Control Office" on Syros, aided by the British navy, had persuaded all but one of the islands of the Cyclades to declare allegiance to Venizelos's Provisional Government in Salonika. German submarines, however, continued to take a heavy toll of Allied shipping in the waters south of the Peloponnisos; and, in an effort to reduce these losses, Britain's naval command at Souda Bay on Crete sent Lieut. Lawson and 12 marines to seize Kythira and persuade its inhabitants to adhere to the Venizelist cause.

In the meantime, however, King Constantine's Government in Athhens, under Allied pressure, had agreed to observe strict neutrality in the war, on the condition that no more islands should be handed over to the Venizelists. Unaware of this condition, Lieut. Lawson and his little force had peacefully captured Kythira, two days after the agreement.

When the KIng's Government demanded that Britain adhere strictly to the no-more-transfers condition, the British Minister in Athens ordered Britain's intelligence chief on Syros, Capatin Compton Mackenzie, to return Kythira immediately to the royalist minority there. But the island''s Venizelists - an overwhelming majority - implored Mackenzie to block such action, fearing royalist retribution for having rallied to Venizelos after Lawson's coup.

Mackenzie's efforts to have Kythira excepted from the Allies' pledge were unsuccessful; the government in Athens regarded Kythira, in the hands of Venizelists, as a threat to the royalist army in the Peloponnisos. So, to gain time to work for a change in instructions, Mackenzie obtained permission to send another officer to Kythira to assess the situation there.

Lieut. Arthur, the young officer sent on the mission, reported that Venizelists had thrown a royalist over a cliff, injuring him slightly, and were afraid that if Kythira were returned to royalist control they would face a similar fate, or worse. He also reported finding several British subjects - old men who long ago had been gold-miners at Ballarat, and who, while in Australia, had acquired British nationality. Seizing on this, Mackenzie reported that the return of Kythira to the royalists could result in a massacre of its "British subjects"; and, as he hoped, this caused Prime Minister Balfour to pause and seek further advice.

Lieut. Arthur then reported that the Kythirans, if they could not adhere to Venizelos, would prefer the island to revert to being a British protectorate, as in the days of the Ionian Islands Republic. When Mr Balfour rejected this, MAckenzie pointed out Britain's pledge to King Constantine did not preclude Kythira from becoming an independent state. To this suggestion Venizelos raised no objections, provided that Britain administered the island; and Balfour agreed.

The Kythirans, on learning this, celebrated with enthusiasm, drafted a new constitution, declared a "free and independent republic of Cerigo" and held a presidential election. Their first choice, King George V of Great Britain, was rejected by the British Government, as was their subsequent election of Venizelos. In a third election they chose Compton Mackenzie, who prudently declined. Finally they chose a native Kythiran as President; and the latter, on the advice of his newly-formed "Cabinet", outlawed King Constantine and declared war on Germany and her allies.

Kythira remained a "free and independent republic" for another three months, until Constantine's abdication, when it resumed its allegiance to Greece. Its brief independence, however, would not have occurred, had not a few youthful Kythirans joined a gold rush in faraway Victoria long before, and returned bearing documents of political significance: British passports."