submitted by Gilgandra Historical Society on 29.12.2005 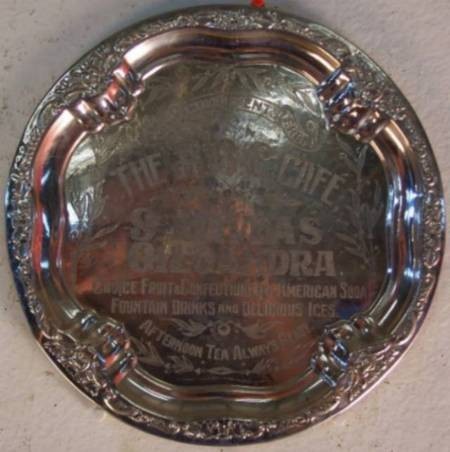 The Gilgandra Historical Society is in possession of a number of "Baveas" platters - at least two of which are on permanent display in Gilgandra' Museums.

This platter is on display at the Gilgandra Rural Museum.

The second platter is, among other realia from Kytherian cafes and shops in Gilgandra, on display at the Coo-ee Heritage Centre.

The Baveas's history of ownership of the ABC unfolds like this:

Stavros Con Baveas, left Potamos, Kythera as a 20 year old in 1908. He spent a few years as a cook for the Cordatos' in Dubbo, prior to establishing the ABC Cafe in Gilgandra in 1910. Stavros Baveas ran the ABC for the next 17 years, with assistance from his brothers and his nephew Con Coroneos. In the 1916 census, he is listed as a Restauranteur and his brother, Sotiros Baveas, aged 31, is listed as a cook, in Gligandra. The ABC then passed to a H. Baveas, who ran it for two years.

Stavros was a civic leader in Gilgandra, and was a great benefactor to the town. He sponsored many sporting activities, and Clubs, including the Gilgandra Motor Cycle Club

In 1934, Manuel asked his sister Chrisannthe, "Chris", to leave Potamos, Kythera, to come to Australia, and help him run the ABC Cafe. In 1939, in a trip to Bombala, Chris met, fell in love with, and subsequently married, Paul Kelly (Yiannakellis), originally from Mytilene (Lesbos).

Meanwhile, Stavros returned to Kythera, and remained on the island.

Gilgandra. NSW. The Kytherian presence in the town. PART ONE.