History > Documents > The Medal of the Municipality of Kythera. Reverse**.

The Medal of the Municipality of Kythera. Reverse**. 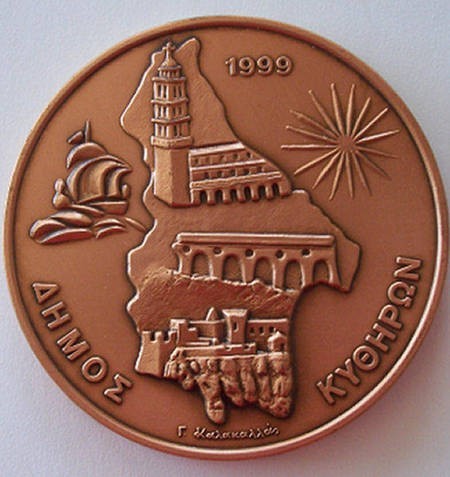 The Medal marked a historic moment: the formation of the Municipality of Kythera.

The task of designing the Medal was assigned to sculptor, and Professor of Sculpture at the National Metsovio Polytechnic, George Kalakallas.

Taking into consideration the designs on coins, emblems, offical seals, and other historical records that were provided by the President of the Advisory Committee, Professor Athanasia Glycofrydi-Leontsini, the reknowned sculptor, Professor George Kalakallas, created a medal (gold, silver and bronze) that represents, on the obverse side, a contemporary female figure symbolising Aphrodite/Venus. Elements from ancient coins were used to design this particular Aphrodite/Venus.

On the reverse, is depicted the outline of the island of Kythera, together with a representation of the Chora Fortress, the Livadi Bridge, and the Mytrtidia Monastery.

Adapted from the Booklet - Open University of the Municipality of Kythera. Academic Activities. 1999-2005

Numismatics (ancient Greek: νομισματική) is the scientific study of money and its history in all its varied forms. While numismatists are often characterized as studying coins, the discipline also includes the study of banknotes, stock certificates, medals, medallions, and tokens (also referred to as Exonumia).

is the study of coin-like objects such as token coins and medals, and other items used in place of legal currency or for commemoration.

Now that we are discussing the Kytherian Medal of Honour, we have moved into the study of exonumia.

**Obverse - Front or face side of coin.

**Reverse - Back side of the coin.

Device - Pattern or emblem used in the design of a coin.

Edge - Rim of a coin often containing a series of reeds, lettering or other decoration.

Effigy - The image or likeness of a person/s.

Field - Background area of a coin not used for a design or inscription.

Inscription - Lettering and wording on a coin.

Legend - Principle inscription on a coin.

Milled Edge - Raised rim around the outer surface of a coin.

Relief - Part of the coin's design that is raised above the field.

Rim - Raised portion of the design along the edge, that protects the coin from wear.


Symbols as the prime form of human communication

At every level of that heirarchy appropriate symbols of power and authority can serve to empower the individual, and to validate his or her core values and sense of identity.

Individuals alllow certain artefacts to "stand in the place" of a sense of collective empowerment. This process occurs at all levels of the political heirarchy.

It must be understood that the Heraldic significance and power for such symbols derives directly from the Head of State of the Hellenic Republic, as the representative of the Hellenic State.

It was thus very appropriate that the first Kytherian Medal of Honour was conferred on the President of the Hellenic Republic, Konstantinos Stephanopoulos, on the 21st May, 2000