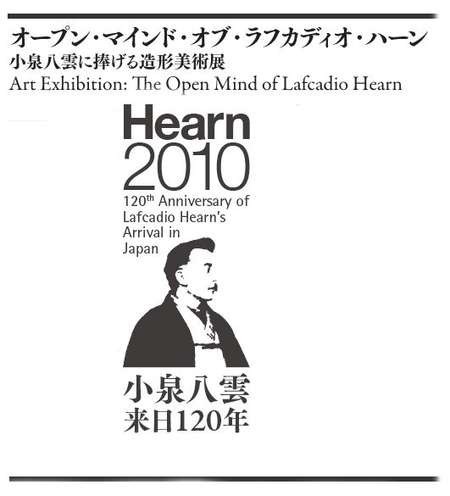 Lafcadio Hearn was born to Kytherian Rosa Kasimati on the island of Lefkada, Greece, on June 27, 1850. His father was Charles Hearn from Ireland. Separated from his parents at an early age, he spent his childhood in Ireland. After traveling to the four corners of the earth, he eventually reached Japan and settled here.

Hearn viewed Japan from his own unique perspective and grew to love and understand the country. He had an open mind, free from racial or religious prejudice. In this modern world, we should appreciate and understand his ideals and learn how to share his attitude.

On this special occasion, ‘Yakumo’s world and spirituality’ will be expressed through an international art exhibition to be held at Matsue Castle, and by an exhibition of Lafcadio’s works and letters at the nearby Koizumi Yakumo Memorial Museum.

To express Koizumi Yakumo through art is a new approach. Last October, visitors and artists alike were inspired by the works by 47 artists from seven countries on display at the Hearn Art Exhibition at the American College of Greece in Athens. This year’s exhibition will be a unique event in Japan, celebrating his open mind through artworks by artists from Japan and other parts of the world.

Since we are celebrating the 120th anniversary of his arrival in Japan, it is timely that we reevaluate his open mind with appreciation and respect.

The Open Mind of Lafcadio Hearn

Mr. Takis Efstathiou, an art coordinator living in Greece, and Mr. Masaaki Noda, a New York based artist, have been cherishing this project since 1996.

A monument produced by Mr. Noda and titled by Mr. Efstathiou was installed on the campus of the American College of Greece in Athens in October 2009. An art exhibition under the same title, featuring works from all over the world, was held in the gallery of the College. The exhibition attracted much attention.

A monument to the Open Mind of Lafcadio Hearn by Mr. Noda will be donated to Matsue in October this year. (2010).

Contents of the Art Exhibition

About 30 works (20 by Japanese artists and 10 by foreign artists) will be exhibited in the tower of Matsue Castle.

The exhibition has the same theme as that held in the American College in Greece last year, expressing Hearn’s spirituality.

It is, however, a unique style of event in Japan. The American College has offered to loan some of the exhibits from last year.
It is also the first time an art exhibition of this type has been held in Matsue Castle. The venue has been made available through the understanding and support of

Matsue City. Matsue Castle is 400 years old, and retains its original form and features. We believe that the displays on the third and fourth floors of the castle will impress visitors and artists alike.

The Art Exhibition will be held in October (2010), a major tourist season, and we expect it will attract many regular tourists, in addition to those who will come because they love Hearn and art.

As some people may have difficulty climbing the steep stairs in Matsue Castle, the Art Exhibition will be relocated to the vault of Karakoro Art Studio in November, (2010), so that more people can enjoy the work on display.

A concurrent exhibition in the Koizumi Yakumo Memorial Museum will feature the spirituality of Lafcadio though works, newspaper articles, and letters that reinforce the themes of ‘coexistence’ and ‘tolerance’.

The Summit will also be organized by the Planning Committee for Events to Commemorate the 120th Anniversary of Koizumi Yakumo’s arrival in Japan.

Representatives of all Koizumi Yakumo associations and museums will convene in Matsue for panel discussions and group discussions to build a network for the future. It will be a good opportunity for the participants to set goals and agree on future plans.

This event, primarily organized by Matsue Shinji-ko Rotary Club, will be held during the same period as the exhibition in Matsue Castle. Mr. Masaaki Noda, the artist who created the monuments to Lafcadio Hearn, will lead a workshop, in which he will teach the participating children how to express their feelings through artwork.
Their work will be exhibited.

Exhibition and Sale by Matsue-ryu (Matsue
style) Association
The Association of Matsue Style consists of local traditional artists and craftsmen. They are planning to exhibit and sell their works under the theme of The Open Mind of Lafcadio Hearn.