Barbarossa. References from the web. 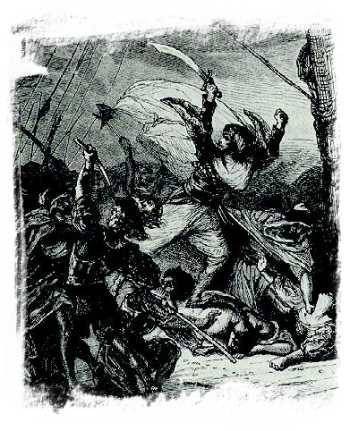 The following are references to Barbarossa from the web.

Notorious Pirate Havens Around the World

"Pirate havens have existed throughout the world and throughout history. The Barbary corsairs favored Algiers, Morocco, Tripoli, and Tunis for their havens. Technically privateers, these corsairs attacked ships and settlements in the Mediterranean. They also enslaved captives unable to pay their ransoms. One reason for the corsairs’ existence was originally to defend North Africa from the Europeans. The height of their power came during the fifteenth and sixteenth centuries, but corsairs still attacked ships into the early nineteenth century.

One well-known Barbary corsair was Khair ad-Din (also known as Barbarossa). During the sixteenth century, he used Kucukada Kalesi, a fortress in Turkey, as his base of operations. Another port-of-call for corsairs was Bizerte in Tunis. The lake behind the port allowed many ships to anchor there, giving them protection from those who pursued them. I

In addition, Bizerte controlled access between the eastern and western halves of the Mediterranean, providing corsairs with a treasure trove of ships to plunder. Long known as a center of trade and refuge for the persecuted, the Republic of Salé (present-day Rabat) also attracted corsairs. Various factions vied for control until Sultan Moulay Raschid reunited Morocco in 1668. He offered his protection to the corsairs for a ten percent share of the profits. Eventually, that percentage increased to fifty percent and the corsairs turned to more reputable pursuits or left Salé".

"Throughout much of its history the Mediterranean Sea has been a home to pirates and corsairs. Corsairs were both Muslim and Christian who operated in The Mediterranean between the 15th and 18 th centuries. While christian corsairs were based on the island of Malta, muslim corsairs had bases along the Barbary coast of North Africa.

Born to a retired Janisary soldier and the widow of a christian priest on the island of Lesbos around 1470, Khzir and his elder brother Ajur were to become two of the better known of these corsairs under the nickname "Barbarossa" (red-bearded). Having embarked on a career of piracy against christian nations, the Barbarossa brothers moved their operations to the western Mediterranean by 1505 where they contributed to the creation of a pirate empire, the Barbary States.

The pirate governments were supported by selling Christians into slavery and by taking heavy tribute as protection money from other countries. By 1510, Aruj was one of the richest men in the Mediterranean. Together with his brother Khizr they were the masters of eight well built galleots and owned vast property and slaves. After many violent clashes with crusader knights and Spanish soldiers, Aruj Barbarossa was killed in 1518.

His brother, now known as Khayrad'din (Gift of God), vowed to avenge his older brother's death and went on to become the ruler of Algiers, after expelling the Spaniards and allying forces with the Ottoman Empire. He extended his conquests to the rest of the Barbary States. His efforts would turn Algiers into the major base of the Barbary pirates for the next 300 years.

In 1533, Suleiman the Magnificent asked him to reorganize the Ottoman Navy and gave him the title of Kapudan Pasha (Great Admiral). Barbarossa supervised the shipyards in Galata, where a powerful Navy was created. Until 1544, he twice defeated Andrea Doria and ravaged the coasts of Greece, Spain, and Italy.

In 1538, he defeated the joint fleets of Charles I of Spain, Venice and the Pope. Barbarossa died in 1546, short after the siege of Nice with the French Navy. Nice then belonged to Savoy, and François I, King of France, was allied with Suleiman against Charles I".

"A pair of brothers known for their success and hatred of the Spanish.
While the details may be questioned, it seems the brothers were born in Greece during the 1470s on the island of Lesbos. Sons to a girl local to the island and a retired soldier from the Ottoman empire.
The elder brother Aruj was the first to embark on his career of piracy by signing on a corsair galley based on the island, a haven for Greek and Moslem pirates.

Captured by the Knights of Rhodes, he served several years as a galley slave, until purchased by an Egyptian emir. The brothers reunited in Alexandria, and backed by the Egyptian emir, the two proved to be successful raiders.

The two moved their operations to the western Mediterranean by 1505 and reestablished themselves in Djerba, near Tunis. They pursued a career of piracy against the Christian nations, capturing Papal galleys, Spanish warships and merchants. They once again changed bases to Djidjelli, near Algiers, after a quarrel with the Sultan of Tunis in 1511.

In 1512, Aruj lost an arm in an attempt to take a Spanish held fort on the north coast of Africa, and was again defeated two years later. This signaled a marked change in the brothers’ activity, such that their attacks concentrated more and more upon the Spanish. Attacks were directed against shipping and coastal settlements alike.

When the sultan of Algiers failed to respond adequately to the Spanish threat in 1516, Aruj led a force of corsairs and after killing the sultan, proclaimed himself sultan.

1518 saw more fighting with the Spanish as they launched an attack from Algiers bay. Followed by Aruj leading an attack on the Spanish settlement of Oran. In this latter attack, Aruj was surprised and forced to hole up in the town of Tlemcen, where he was killed in an effort to break out of the trap.

Hizir , now called Khair-ed-Din, the Gift of God, allied himself with the Ottoman and was officially named sultan of Algiers. He continued to trade attacks with the Spanish. Losing Tunis in 1535, taking Majorca and Nice and defeating a Christian fleet that was threatening the eastern Mediterranean. He died in 1547, apparently favored in the Ottoman court and successful commander.

Throughout much of its history the Mediterranean Sea has been a home to pirates and corsairs. The battle was waged for centuries between the Moslem and Christian forces, as well as by less partisan groups, usually established in areas of the sea that provided relief from hostile parties. The Barbarrosa Brothers, so called for their red beards, are two of the better know of these corsairs. Using galleys to full advantage, they were able to take on larger sailing ships in the calm winds of the sea".

Greek Turkish pirate and admiral in the service of the Ottoman Empire.

"He and his brother 'Aruj, sons of a Turk from Lesbos, hated the Spanish and Portuguese for their attacks on North Africa and took up piracy on the Barbary Coast in hopes of seizing an African domain for themselves. When 'Aruj was killed in 1518, Khidr took the title Khayr al-Din. He offered allegiance to the Ottoman sultan and in return received military aid that enabled him to capture Algiers in 1529. Appointed admiral in chief of the Ottoman Empire (1533), he conquered all of Tunisia. Emperor Charles V captured Tunis in 1535, but Khayr al-Din defeated his fleet at the Battle of Preveza (1538), securing the eastern Mediterranean for the Turks for 33 years. His red beard was the source of the epithet Barbarossa, used by Europeans".

"A notable event during this long period was the brief occupation of the island by the Turkish admiral Barbarossa in the 16th century, who devasted the land, burned the villages and slaughtered most of the population."
[Perhaps a little exaggerated.]

Making the Most of Maps: Field Survey on the Island of Kythera

".....to local belief, the island of Kythera, off the coast of the Peloponese, was depopulated seven times. One episode with particular significance was the sacking of the Venetian settlement of Agios Demitrios (Paliochora) by the Ottoman "pirate" Barbarossa in 1537 and the subsequent removal of as many as 7,000 people from the island (the current population is 3,000).

Whatever the veracity of the belief in repeated depopulation, the island landscape is characterized by shifting abandonment and reuse through time. The sacking of Paliochora probably contributed to the abandonment of a large area of marginal agricultural land in the east coast hinterland, perhaps starting with a shift from cultivation to opportunistic use and grazing, and thence to the pervasive aspalathos (spiny, impenetrable regrowth, which today clothes large parts of the island).

The Paliochora region is by no means the only abandoned area, but its history is of particular interest owing to this documented event and historical accounts that can be tested archaeologically."