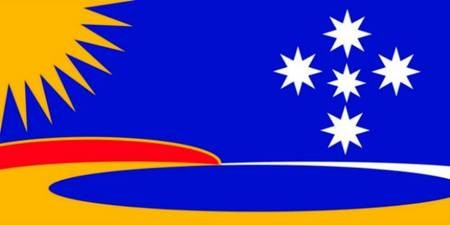 When Waverley Council first had a dream of what Camp­bell Parade at Bondi Beach would look like, lots of colour was one of the top priori­ties.

Now, almost two years after the up­grade work started, that priority is becom­ing a reality.

The new Bondi Beach flag was raised last week by the coun­cil onto the flagpoles that line the centre of the main Street of Bondi Beach.

The Mayor of Waverley, Paul Pearce, said it was a major step towards what the council had envisaged for Camp­bell Parade from the beginning.
“The flags really do look good. But this is just a taste of what we are going to see down here,” he said.
“When you look down Campbell Pa­rade, you can see that things are coming to­gether well.
“You are going to get the colour down here that we wanted.”

Cr Pearce said that ultimately banners would line the flag­poles down the street and it was great to see what was already coming out.

“It is the middle of the day now, and just look at it — you have life down here. Now, the other side of the road has to be fin­ished,” he said.

The designer of the flag, Dover Heights resident George Pou­los, said to see the flags flying along Bondi Beach was a
dream come true.

“My eyes light up — look at all of these flagpoles. This is go­ing to give Bondi a real sense of visual identity. There is a lot of colour here — it’s a bit of a revolution,” Mr Poulos said.

Next on the cards for Mr Poulos is cre­ating banners for the poles, but he said that he wanted to do one thing at a time, At the moment, it was concentrating on the flag.

Waverley Council adopted the flag last month. Instrumental in the approval was the opinion of the council precinct com­mittees, and all 14 gave the green light.

Cr Pearce said the flag was for all the Waverley beaches.

Twenty-five flags were bought by the council for Campbell Parade.

Since then the flag the has flown at numerous locations around Bondi Beach, including all 25 flag poles along the centre of Campbell Parade. This constituted the longest continuous public display of an Australian ensign which is not the incumbent flag of Australia, in Australian history.

The array of flags was captured forever during the "shooting" of the movie Looking for Alibrandi*. The flags feature (incidentally) in a number of scenes in that movie.

Looking for Alibrandi is the story of Josie Alibrandi's experiences at school, and her relationships with friends and family during her last year at St Martha’s girls’ school. In the year that the novel is set, her father comes back into her life, the year she falls in love and discovers the secrets of her family's past.

Josie tells us the story of her struggles with her Italian-Australian identity and the highs and lows of teenage life. It’s the story of a young girl who feels she doesn’t belong. As the novel unfolds, she learns to cope with these feelings of insecurity and learns that everyone has similar feelings at different times.

Looking for Alibrandi is an analysis of multi-cultural Australia and the struggles that each generation of immigrants has with finding their place in Australian society and defining their identity. Josie, Christina, Nonna Katia and in fact all of the characters have a story to tell about culture in Australian society.