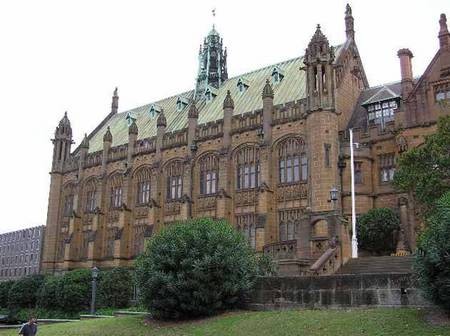 MacLaurin Hall, view from the South.

To download a superb 4-page brochure about the event, which also provides information as to how to purchase these books, go to:

If you download this brochure, between now an the launch date on 9 Decemember, 2009, could you please Forward, the brochure to ALL Hellenes and Philohellenes on your email list, who you know might be interested in attending the event.

*Note that in the book(s) Life in Australia, (1916, 2009), a photograph on page 62, designating Sydney University, depicts the Main Quadrangle, in which the MacLaurin Hall is housed.

Inspired by English Perpendicular Gothic Collegiate buildings. With the towers popular then. The Gothic Revival style Medical school visually complements the main quadrangle of Sydney University and is of considerable architectural significance in its own right. Two courtyards were formed, at different levels due to the slope of the site, separated by a link building in the form of a cloister (now modified). The original wing contained a museum and laboratories on the ground floor and five theatres and a dissecting room on the first floor. Additional theatres were constructed within the new wings.

MacLaurin Hall is located at the south-west corner of the Quadrangle Building, diagonally opposite The Great Hall. The exterior continues the neo-Gothic style of the earlier buildings.
The upper floor was built to house the Fisher Library, with the reading room in the main chamber. Five floors of book stacks were originally siuated in the building's northern arm, where the grand entrance stair is now located. The ground floor was built for the Nicholson Museum, which is still there (see Nicolson Museum).
The Fisher Library moved to its current location on Eastern Avenue in 1962, and MacLaurin Hall was substantially renovated in the late 1980's to provide a spectacular venue for recitals, formal dinners and corporate gatherings.

Construction of support services was completed in December 2004 which added a banquet kitchen and a goods passenger lift adjacent the rear stairwell.

The first purpose-built library for the University designed not only for its principal function but to advance the public understanding of art history and the appreciation of fine craftsmanship. Designed in the European Gothic tradition but constructed in the best Australian materials and with the highest quality craftsmanship, the library proudly extolled Australian craftsmen as the equal of their forbears. The choice of cedar for the hammer-beam roof represented an awareness of the diminishing availability of one of the finest and most distinctive materials of early settlement and was intended as 'an enduring example in, and memento of, the fast-disappearing cedar of the east coast of Australia'. The carvings and decorative embellishments of the building proclaimed in symbolic form the University's place within the tradition of British universities and the contemporary international world of scholarship. A very fine example of the Gothic Revival Buildings designed by Walter Liberty Vernon. An integral part of probably the finest collection of Gothic Revival buildings in Australia. 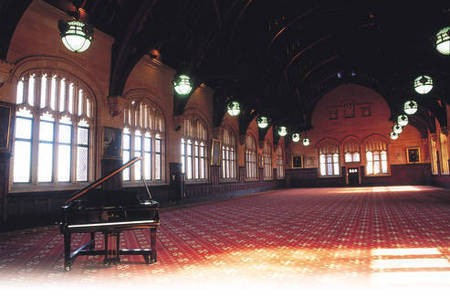 Inside the magnificent MacLaurin Hall.

The University library was begun in 1852 and by the 1880s was housed in various locations in the main building. Thomas Fisher's bequest in 1884 provided sufficient funds for book purchases and for a building fund and in October 1889 the government agreed to provide matching funding but in the 1890s Depression no money was forthcoming. In 1900 the Parliamentary Standing Committee on Public Works recommended that the government fully fund the building leaving the Fisher Fund as a perpetual endowment for library purposes. Designed by the Government Architect's branch 'with a view to the advancement of art education of the people' as well as for its main purpose, work began on 23 January 1902 and Fisher Library was opened on 20 September 1909. Occupying part of the south side of the, as yet unrealised, quadrangle the building accommodated the Nicholson collection on the ground floor, a large reading room for 150 readers on the first floor and a refectory and service rooms in the basement with six floors of book stacks at right angles forming part of the west side of the quadrangle. Of high quality workmanship including stone carving executed 'by one of the best Gothic carvers in Australasia' and a magnificent cedar hammer beam roof the design and embellishments of the library claimed the University's place within the tradition of British universities and the international community of scholars. The initials of the Government Architect W L Vernon and his assistants William Mitchell, George McRae and Arthur S Cook were included in the carvings. The library and book stacks were vacated with the opening of the new Fisher Library in 1962 and altered for other uses by Fowell Mansfield & Maclurcan. The reading room was remodelled and named the MacLaurin Hall after Chancellor Sir Norman MacLaurin. Seven levels of open steel structure, stairs and lifts within the book stack were demolished and replaced by teaching and office spaces and a staircase leading to a new entrance. 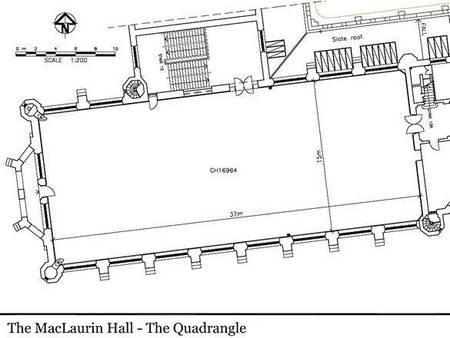 Maclaurin Hall, the former Fisher Library is Gothic Revival in style. The building was designed to form a corner to the Quadrangle and is two storey to the Quadrangle and three storey to Manning Road. The southern facade features a central bay flanked by two turrets. Blind tracery follows the line of the gable which terminates in a carved finial, a motif continued from the earlier ranges to the east. The stepped buttresses to the southern elevation emphasise the form of the building similar to the chapels of the medieval colleges. The reading room was located on the upper floor and these windows received the most elaborate tracery. The hammerbeam roof of the reading room/hall is constructed of cedar and is based on English prototypes with which the Government Architect Walter Liberty Vernon was familiar. The roof of the hall is clad with copper/muntz metal. A distinctive feature of the building is its elaborate skyline, formed by the pinnacles which terminate the buttresses, the carved finials to the gables and the central fleche. The louvred fleche, which is constructed of timber, is clad with lead. This motif was used on all of the faculty buildings designed by Vernon and may be based on the elaborate fleche added to Cardiff Castle during the extensive renovations by Burges. Intended to vent gas lit buildings the elements were developed into distinctive roofscape elements.

Refer to the 1999 University of Sydney Heritage Fabric Survey. Interior not assessed.

Refer to the 1999 University of Sydney Heritage Fabric Survey. Ensure that the impact on any proposal on the heritage significance of the building, and their setting, is assessed when planning new works. The preparation of a detailed Conservation Management Plan for this building, and its curtilage is recommended. Further research to determine the cultural significance of this item is required. 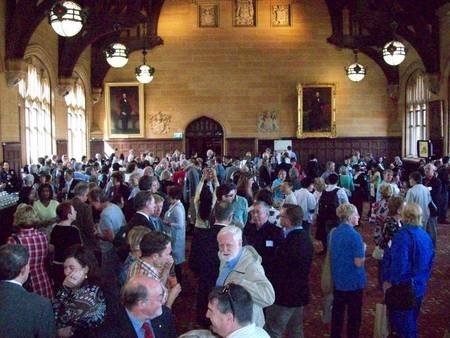 Architectural plans for the MacLaurin Hall