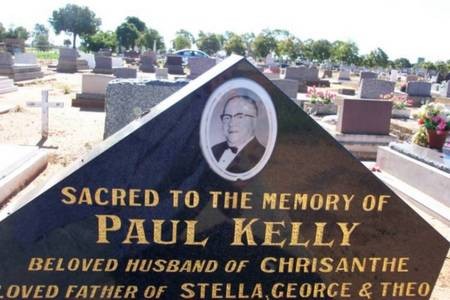 [Paul Kelly (Yiannakellis) was a towering presence in the town of Gilgandra, NSW. He married Kytherian Chrysanthe Georgopoulos (Pronounced Yeoryopoulos, called Poulos) in 1939. His impact on Kytherians and Kytherian affairs was immense - Administrator.]

Paul came to Australia in 1926 from Mytilene (Lesbos), and after two years in Sydney, went to Bombala, where he was employed by the late Nicholas Condoleon and Mrs Condoleon for 12 years.

Following his marriage to Chrisyanthe Gorgopoulos he came to Gilgandra, thirty two years ago, where for a period of time he was in partnership with his wife and her brother, Emmanuel Gorgopoulos (deceased) in the newsagency and the ABC cafe.

The remainder of his life was spent in the Cafe except for a short period in 1960/1961 during which time, he and his family resided in Sydney.

Paul Kelly was a man who was respected and liked by all who knew him and this was shown by the number of people who attended his funeral which was held at the St. Ambrose Church of England on May 4.

Although due to his business commitments he was unable to participate in many club activities, no organisation. either Church, sporting, charitable, or service, was ever turned away without help of some type.

Paul Kelly was a true Christian who helped those who needed it, but never once asked for any thanks.

One step-brother, Photis Kelly and his family of Kingsford, and a brother, Strati Kelly, predeceased him.