History > General History > The great Grecian earn: how immigrants made a cafe society

The great Grecian earn: how immigrants made a cafe society 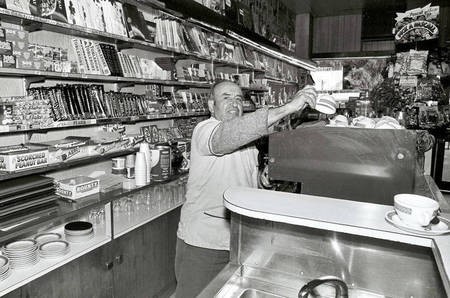 The dockets at Aroney's Cafe in Katoomba trumpeted its ''famous'' fish dinners and ''famous toasted sandwiches''. But it was the hot chocolates, created by my father, that won the cafe its true acclaim.
Customers travelled from as far as Canberra and Sydney, and even overseas, for a hot chocolate at Aroney's, which was named after its original owner, Peter Aroney. The cafe stayed open until late. The customers decided when it was time to leave.
My father treated every customer - whether they were men down on their luck from the nearby Eldon hostel or the prime minister, Ben Chifley, on his way home to Bathurst - with the same deference.
Aroney's stood at the top of the main street of Katoomba, across the road from the Paragon Cafe and Carrington Hotel, and near Theo Poulos Real Estate, which were also run … by Greeks. The Cordatos, Archondoulis, Zakis, Lekkas, Darias, Bistaros, Stavros, Prineas, Georges, Vrachnos and Fotias families have also run businesses in Katoomba in the past 40 years years.
A book distributed to Greek migrants in 1916, Life in Australia, has just been reprinted and translated into English by the Kytherian World Heritage Fund. The book, being launched at the University of Sydney today, reveals the struggles and successes of Australia's early Greek migrants.
''Greek establishments stand in the most important and most central locations in almost all of the cities in Australia,'' the book says.
''The lengthy nomenclature of their owners mean that such establishments are easily recognisable. Some Greeks, however, have shortened their names, as the Australians find it hard to pronounce such long, difficult names.''
My father, Ioannis Varipatis, left the small Greek island of Kythera, at the southern tip of the Peloponnese, in the mid 1920s, before he was even a teenager. Speaking no English, he accepted the advice of migration officials and swapped the name Ioannis Varipatis for Jack Patty.
My father and his older brother, George, bought Aroney's in 1937. Katoomba was home to a host of Greek cafes, including The Paragon, The AB Cafe and The Savoy, which was owned by another of Dad's brothers, Andy. The cafe became a family affair when Dad invited his brothers-in-law, George and Peter Cassimatis, to join his business.
Like many other Greek migrants, my father and Zacharias Simos, who established the famed Paragon cafe, were assimilated into Australian life - though they maintained a deep pride in their heritage and strong ties with Greek cultural tradition.
In 1934 Zacharias and his wife Mary (Panaretos) gave birth to their son Theodore, who became a top barrister, representing the British Government in the Spycatcher case against one Malcolm Turnbull, and later a Supreme Court Judge. He died aged 75 this year.
Life in Australia presents photos and commentary about other early Greek businesses such as those owned by the Andronicus Brothers and Nicholas Aroney.
My father retired in the late 1980s when he was aged 75. Only then did he make his first trip home to Kythera - after 66 years - and met, for the first time, the youngest of his 11 siblings, his sister Anna.
And yet, it was only during that first and only return visit to Greece that my parents realised how ''Australian'' they were. My mother, who Australianised her name from Caliopy Cassimatis to Poppy Patty, was especially offended at how rarely she heard the words ''please'' and ''thank you'' spoken in Greece.
Life in Australia had already traversed this territory. The Greek migrant is advised: ''If we carefully consider the measured and ordered life of the Australians, we find that Australians, wherever they are, eat, dress, sleep and walk with the greatest of care and circumspection. They begin every conversation with ''please'' and finish it with 'thank you.'''
It further informs: ''Raising your voice, banging your hand on the table, making gestures, forming groups in the streets, impertinence, scruffy dress are, for the Australians, something strange and unattractive. Such habits are disliked and, anyway, belong to uncivilised peoples.''
According to the latest census figures there are now more than 365,000 people of Greek heritage living in Australia. Angelo Notaras, the trustee and administrator of the Kytherian World Heritage Fund, which also runs kythera-family.net, said that he was about 10 years old (in about 1943) when his father showed him a family copy of Life in Australia. It contains a photo of his father, grandfather and uncle John, standing in front of the Marble Bar Cafe in Grafton, in about 1912.
Life in Australia was written, in Greek, in 1916 by Georgios Kentavros and two merchant brothers, Kosmas and Emmanouil Andronikos.
It was was financed by another merchant, John Comino.
''Little did we realise that it was the most important Greek publication in the first 200 years of Australian history,'' Notaras said.
George Poulos, the second administrator and trustee of the Kytherian World Heritage Fund, said he hoped families would be inspired to expand and chronicle the Greek Australian narrative from 1916 to the present day.

THE KYTHERIAN EAGLE HAS LANDED ON THE HIGHEST PERCH OF THE FOURTH ESTATE, IN THE ANGLO-AUSTRALIAN PRESS.