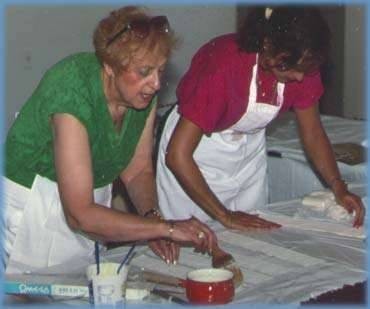 Co-author Ellen Vidalakis Furgis and her daughter Karen demonstrate how to make Greek pastries at the 1989 Living Traditions Festival.

Savor the richness of Greek culinary fare through this "hands-on" section of the Utah's Greek-Americans website. While you may have tried Greek cuisine in a restaurant, now is your opportunity to try baking honey-laced baklava, flaky cheese-filled triangles, or cooking aromatic stuffed grape leaves and souvlakia. To offer an example of the Greek Orthodox Easter feast tradition, a recipe for deep red-dyed eggs is also provided.

These easy-to-follow recipes, which range from appetizers to dessert, are excerpted from Greek Cooking at Its American Best, a cookbook co-authored by Ellen Vidalakis Furgis, from Salt Lake City, and D. Eugene Valentine, from Tempe, Arizona.

The subject of Utah's Greek-Americans conjures images of honey-laced layers of dough and nuts that combine to create the rich baklava dessert, or perhaps tangy lemon-rice and beef wrapped in a grape leaf to make dolmates.

While Greek culinary fare offers a sampling of the community's traditions, it is just part of the recipe for Greek life in Utah. Add to it rich immigrant history, blend in Greek Orthodox faith, and combine with family heritage and love, and the formula for KUED's new documentary is complete. Utah's Greek-Americans aired on KUED-Channel 7, in December 2000.

Part of the Many Faces, Many Voices outreach project that celebrates ethnic and cultural diversity, the program was produced and written by Kathleen Fletcher Weiler.

The documentary chronicles the arrival of Greeks in the Intermountain West, many of whom came to America at a time when the country needed cheap labor for the rapid industrialization of the West. Before long Greeks were the dominant labor force in the Intermountain West's railroads, coal and metal mines, smelters and construction crews. Mining towns in Bingham and Carbon County were booming.

"They thought they would stay for a short time -- sojourners," says local historian and author Helen Papanikolas. "But they kept staying to send money for their sister's dowery . A girl could not marry without a dowery and poor people didn't have money for doweries. They also wanted to help their parents because Greece was impoverished."

"My generation owes a lot to the first generation," says Mike Korologos," who is featured in the program. "They came here penniless. Can you imagine now going to some country where you don't know the language and starting from scratch? We owe a lot to those old timers for teaching us how to work and how to get educated and that's paying off."

Utah's Greek-Americans highlights contemporary Hellenic traditions by giving viewers an inside view of the Greek Orthodox faith, the annual Greek Festivals in Salt Lake City and Price, Orthodox weddings and baptisms. Religious leaders of the Greek Orthodox Church explain how their congregations provide spiritual guidance for members through deep-rooted traditions.