People > Life Stories > History of the Aroney Family in Nowra.

History of the Aroney Family in Nowra.

Nicholas was a very hard worker and the business was quite successful but after taking over full control of the business was finding it hard to manage the shop on his own, so he wrote to his cousin Nick Aroney (Anastasopoulos) in Warren and asked if he would like to join him in Nowra as his partner. 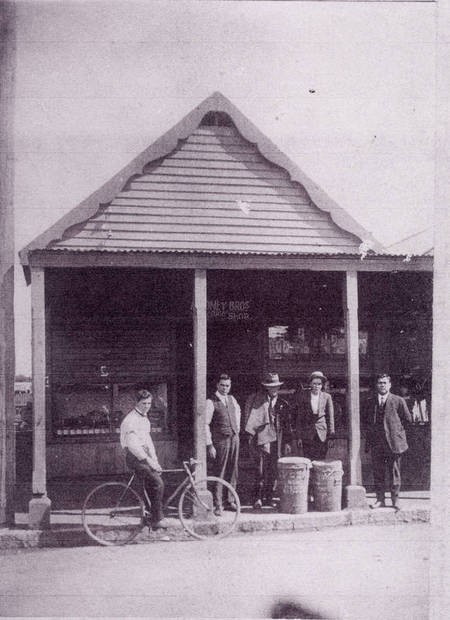 Little Nick, as he became known to differentiate between the two Nicks) had arrived from Greece as a young boy and proved he was very capable and diligent in this type of business.

Nicholas Anthony Aroney (Anastasopoulos) was born in Cerigo, County Laconia, Greece, on 14th February 1900. He was travelling on a German ship to Australia in 1914 and because of the imminent beginning of World War 1 and the possible impounding of the ship in Australia, all passengers were disembarked in Batavia (Indonesia) necessitating the Australian Government sending a ship to bring the passengers on to Sydney.

He arrived in Sydney on 11th October 1914 on board the ship Tasman. He resided at Wingham for three years, and then moved to Kempsey for a year, then to Warren for a year where he took up employment working for an uncle. Times were difficult; wages were very low, but through hard work and frugality, Nick was able to accumulate some capital, and then moved south to Nowra during 1920.

In September 1921 Aroney Bros announced that new premises were in course of erection, and they had moved temporarily a few doors down from the old address – to the shop previously occupied as a billiard room. By December customers were invited to the new shop. This shop was possibly leased from the Muller family for in September 1922 Nowra Municipal Council approved a two-storey room to be erected at the rear of Muller’s building in Junction Street – occupied by Aroney Bros.

Around this time, Andrew (Anarginos) joined his brothers in Australia; by then all of them had the locally accepted surname of Aroney. Andrew was the youngest of the Aroney siblings; he was born on 15th April 1903, arrived in Sydney on board the Jervis Bay on 6th November 1922 and went directly to Nowra to be reunited with his brothers. 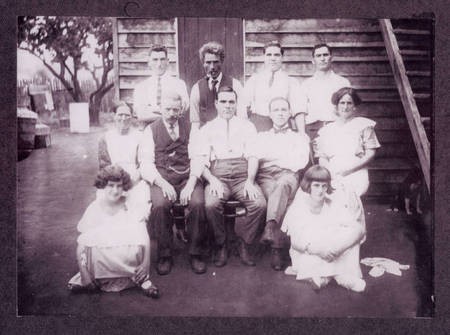 In 1923 Nicholas arranged for his sister Stamatina to accompany his wife and her sister Yiannoula on the voyage to Australia to join the other members of the family in Nowra. This represented a change of plans for Stamatina who had been preparing to join her sister Kalliopi and husband Basilios Cominos in America. Nicholas proved to be a generous family-oriented man; he paid for the fares from Greece and, more importantly, he extended a sincere and loving welcome to his relatives.

With the arrival of Stamatina in Nowra, the four siblings were reunited. Of the seven Aroney children Maroulia was the only one who stayed behind in Greece.

In 1924 Nicholas arranged for local builder, Albert Vost to erect a house at 14 Kinghorne Street Nowra, as the family home. Nicholas and Stella in subsequent years had two sons, Theodore and Brettos (Victor) and a daughter Helen. The children attended Nowra Public School until 1939 when the family moved to Wollongong. 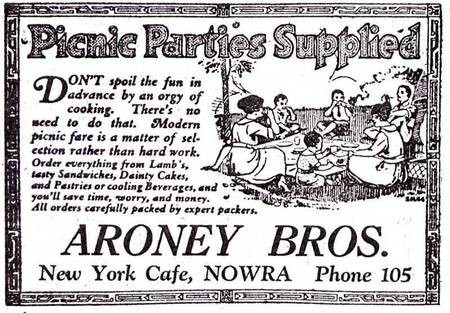 Peter Aroney preferred a less demanding life and he opened a billiard room in Nowra, recorded in rate and valuation records as 64 Junction Street, the property being leased from Mrs B Muller. Peter met and married Kathleen Beaumont an Anglo-Australian woman in 1919. Kathleen had a young daughter Eileen; they added to the family when their daughter Theodora (Thea) was born in 1920. The family were living in Moss Street, Nowra, in 1930 and Peter’s occupation at that time was recorded as ‘billiard marker’.

The Kytherian grapevine was very effective spreading news and gossip to communities, and it was not long before someone undertook a matrimonial matchmaker (proxenia) between Stamatina in Nowra and Dimitrios Aroney who, since 1921, had been working in Townsville about fifteen hundred miles to the north.

Andrew escorted his sister Stamatina to North Queensland where she and Dimitrios met and became engaged. The wedding later took place in the Anglican Cathedral Church of St James on 5th June 1926 and Stamatina was accompanied by Andrew, Peter’s wife Kathleen and her young daughter Theodora.

In 1927 Jim and Stamatina established the Central Café at Mackay in Queensland. A few years later Stamatina sent for her brother Andrew (Andy) in Nowra to help work in the café and Andy moved to Mackay mid 1929.

Peter followed a few months later with his wife Kathleen and daughters Eileen and Thea. It is believed that he was sent to Mackay by Nicholas to get him away from the ‘undesirable ambience’ of the billiard saloon.

George Kepreotis, Stamatoula’s brother worked in the café until he moved to Mackay in 1934 to manage the Niagara Milk Bar which Andy and Peter Aroney had opened next door to the Central Café. Unfortunately, George was not a good businessman, being more preoccupied with fishing, hunting and gambling, so it was no surprise that the shop wasn’t going well. Andy and Peter decided to take it over themselves.

George volunteered for army service in the 1940s and served in the Middle East, including the El Alamein battle and later in New Guinea and was eventually flown out of there with severe malaria. After demobilisation he accompanied his parents home to Kythera in 1946. They had arrived in Australia on 1st September 1939 for a holiday, but because of the war were unable to return home. George later married there. He subsequently made a trip back to Australia but returned to Kythera to end his days.

Andy Aroney remained in Mackay later marrying Evangelia Lukas, a very fine lady from the Island of Castellorizo. He and his brother Peter opened and successfully ran the Niagara Café for a number of years. He suffered a massive stroke and heart attack and passed away in 1947 aged 43 years. He was interred in the Mackay Cemetery.

Peter Aroney died in the late 1950s and he and his wife, Kathleen, are also buried in Mackay.

Jean Prineas (nee Kepreotis) with her husband Tony opened and ran a number of take-away coffee lounges in Mackay and in several other country towns, finally retiring to the Sydney suburb of Belmore, passing away on 2nd March 1979 aged 69 years. Tony lived on at Belmore for a number of years then in a retirement complex, passing away at the ripe old age of 96 on 21st March 1995.

Jim Aroney, husband of Stamatina Aroney died on 10th August 1951 in Mackay aged 66. He is buried in the Mackay cemetery. Stamatina died in Sydney on 11th December 1959. Her funeral took place on 16th December 1959 and she was interred at Botany Cemetery, Sydney.

The Nowra Café was doing well from patrons of the nearby Crown Theatre and the School of Arts Pictures who were served chocolates and drinks at interval so Aroney Bros decided to erect new premises on the southern side of Junction Street, where the old billiard saloon had previously stood. The Nowra Amateur Cycling Club held regular meetings in the café and in October 1930 Nick Aroney ‘generously presented a cup for the 16 mile race’. The Aroney Cup was presented at a presentation night held in the café.