My acquaintance with Kyria Janoula goes back to summer 1962 when I, as a technical student, worked for Mr. Koksma’s World Council of Churches Team at Kythera. She and her husband were the proud owners of Ameriali in Karavas. As I was working in Diakopoulianika for the new municipality water system I was allowed to have my lunch at their place. Also in weekends when there was a party my fellow team members and I went there to dance and enjoy the wine and mezedes. One year later in August being on vacation with a friend in Karavas we were invited to the wedding of Kyria Janoula’s daughter Adriana.

After having finished my studies and my commission of the military service in The Netherlands, I returned July 1965 to Kythera to help Mr. Koksma in his WCC Team as a civil engineer. At that time there were several future projects made possible by the WCC for municipality water systems. But in order to start these projects the villages had to be surveyed first. Also at that time some strange stories went around that these surveys served a total other purpose. Anyway when early 1966 I arrived from Chora with 3 technical students to start the survey in Platia Ammos we were met by at least five ladies with brooms and sticks surrounding our car and who did not allow us to start the survey! I knew them all quite well and one of them was Kyria Janoula. I did my very best to talk them out of their wrong idea about the survey but we had to return to Chora with nothing achieved.

Only some years ago she did tell me, slightly embarrassed, that she did not feel happy having been present at that occasion but that she was pressed more or less by the other ladies to cooperate with them! And only later on they had understood that they were mistaken.

She was always very friendly and whenever my wife and I were at Kythera, we visited her, drank large cups of coffee and ate a lot of cookies.

At one of our visits to Kythira in 2004 we heard she was in the hospital in Potamos. We met her daughter, who had come over from Australia and she told us that the doctors thought her terminally ill. With dread we went to see Kyria Janoula in her hospital bed. She was glad to see us and to us she did not seem terribly ill at all.

Early 2005 we went to her house, fearing she might not be there anymore. How happy we were to see her alive! With a laughing face she told us that the doctors had diagnosed her all wrong.

When the charter from Holland started bringing Dutch tourists to Platia Ammos she started to fix miniatures on the wall of her porch along the road and many passer’s-by made pictures of her collection.

Kyria Janoula wrote a short story about the varka (rowing boat) her father free of charge used to ferry people from Platia Ammos to the Peloponnese and even Crete. This was at the end of WW II. Would anybody of these people, Greek and foreign, privates and or officers still be alive? 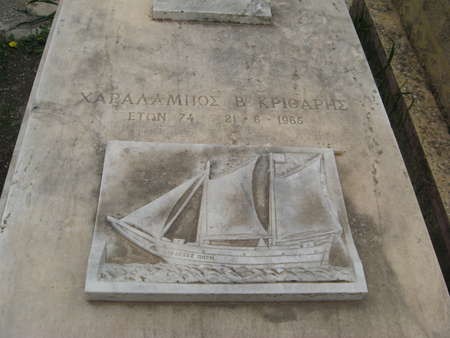 The rowing boat is already for many years lying on the beach of Platia Ammos just opposite her house and not protected for the weather influence of summer and winter. She would very much like the boat to have a more permanent protection and to stay at this place on the beach.

When we saw her last October 2008 she read this story to me. I got myself a picture of her father’s tombstone and of the boat and her explanatory text that stands with the boat. 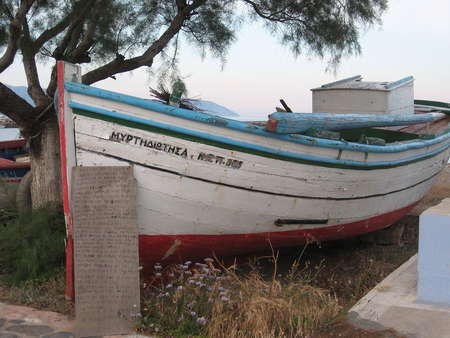 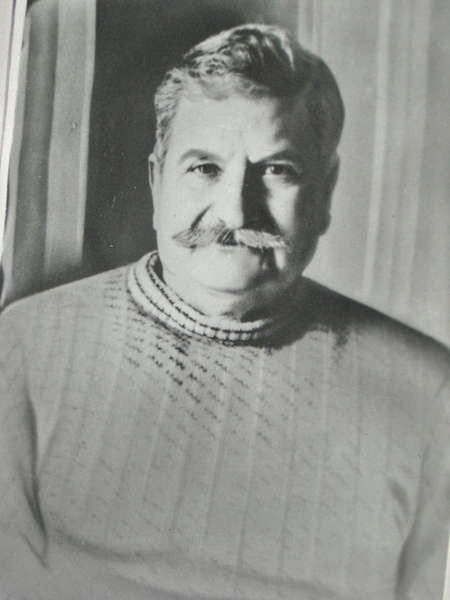 Unfortunately there was a recent court order which made impossible to further execute this idea.
In December 2008, I phoned a friend in Karavas and I was informed that the dimarchos was going to take some favourable action. However nothing was yet achieved in 2009 and 2010.

Kyria Janoula from Platia Ammos passed away end of 2009. She was 90 years of age when she fell and broke her hip, she recovered, but shortly after coming home from the hospital she died of heart failure.
What will happen now with her dearest wish? 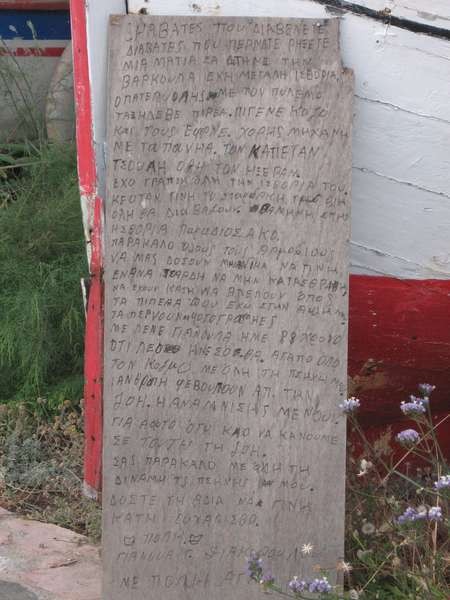