The Coroneo family in Scone

PHOTO: Anna and Theo Coroneo with young Dana Wilson, co-star of The Shiralee, (an Australian film starring Peter Finch, 1957) at the Pre­mier of the film held at the Civic Theatre, Scone. 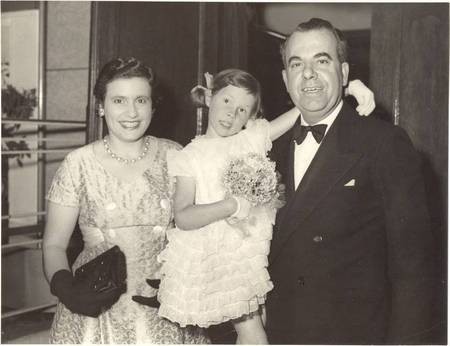 p.29.
The Coroneo's were the first of the shop-keepers of Mediterranean or Central European origin. They made a mighty impact on the town when they built their highly decorated shop and refreshment room in Kelly Street. It was a new type of shop selling a new type of goods. Who had ever been served with chipped potatoes accompanying their steak before? Where else could one buy very well-cooked fried fish in batter? Or ice-cream so­das, or Sundaes?”

Growing up in Scone as the son of the cinema proprietors could not have been all that bad - indeed as it turns out I believe that I have had, thus far, a very fortunate life. From an early age until I left Scone at 16, I saw a lot of movies. This, before videos and some before television - most before the age of the gratuitous violence and debauchery that Hollywood now relies on to sell its product (however in the movie this morning, Peter Finch was handy with his fists and had an eye for the girls). I cannot be certain quite what this did to my psyche or to those of my brother and sister. However it is perhaps no accident that we all finished up in eye care - in optometry and ophthalmology. I had developed a fascination with light and lenses and ultimately sight and the eye - an organ considered to be at the pinna­cle of evolution of sense organs.

Andrew Coroneo, whose family sold the Civic Theatre to my parents re­counts a childhood encounter with Scone’s Pittman gang from which, on one occasion, he escaped by climbing a pepper tree. A gang member, Skinny Crackett said “Let’s get Andy, he’s a dago”. Bruce Pittman, gang leader replied “He’s not a dago, his father owns the picture show”. At least the Pittmans had some sense of priorities.

Another event that may not be well known is that on the 22 May 1935 one of the first and largest meetings of an organisation known as AHEPA (Aus­tralian Hellenic Educational Progressive Association) occurred in Scone. The originators of AHEPA in Australia were Greek shopkeepers in NSW country towns. Its primary objective was “to revive and marshal into active service for Australia the noblest attributes of Hellenism”. There is a photo taken at this meeting and I believe my father was there and took some no­tice of this aim.

588:Yes I knew Theo well as a matter of fact it was my Father Theodore Minas Comino from the Merriwa Cafe, who introduced his neice Anna to Theo. I remember Theo was very into budgerigars and had himself a huge cage full of these birds. I was about 20 at the time and would go over to Scone and Theo would take us out to the racecourse and we,d shoot some hares there. We also had a cattle property on the Scone Merriwa road and would take all our stock to Scone saleyards to sell them ,when we,d call into see Theo and Anna and Dads Sister Mary who stayed with them. Yes I guess my Father had more to do with your being here than you care to think about eh?