My Grandparents were Agapi and George Lianos from Kythera,Greece. Papou was born on the 9th June1873 in the village of Liananika to Emmanuel and Relia, farm owners. He was the only son and had four sisters, Irene, Kerani, Marigo and Stavroula. Agapi's birth date was in 1867. 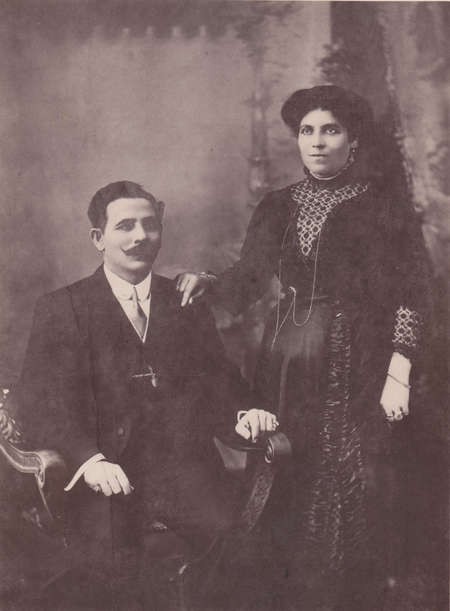 He worked on the farm with his parents and at the age of twenty four married Agapi the seventeen year old daughter of Anthony and Theodora Comino on the 15th February 1897.

His parents gave them some land with a two room house on it and it was there that their first child Stavroula was born on the 31st July 1898. But conditions were very hard in Kythera so they decided that Papou should go to Australia to try his luck. Also his wife's brothers, Dimitrios, Menas and Nicholas,and her Uncles Zacharias and Ioanis Comino, were already settled in Sydney, which would be a great help to him, he hoped.

After a lovely and uneventful trip he arrived at Circular Quay Sydney on the 30th of October 1898 and was met by his brothers-in-law and taken to lodgings and instructed in what was to be his life for some time to come. A bad joke was played on him by his brothers-in-law, who had put him in a bug infested room on his first night in Australia, but then gave him a room in one of their homes.

And it was hard. From the 3rd November 1898 he had to get up at 3.a.m. to go to the markets to collect oysters and fish and bring the produce back to the cellar and clean the fish and open the oysters. He then had to go upstairs to scrub the floor, clean the tables and wash the cutlery in preparation for the evening work in the restaurant. Then he had to go back to the cellar to open more oysters. Then it was back to the pantry to wash up the cutlery and dishes from the restaurant after it closed. He went to bed at midnight, and then the routine started again. He had Sundays off but had to clean his room and wash his clothes. Then he dressed up in the best clothes he had and went for a walk in the Domain but he had to be home by 5p.m. to prepare himself for the next day. And so it went on. 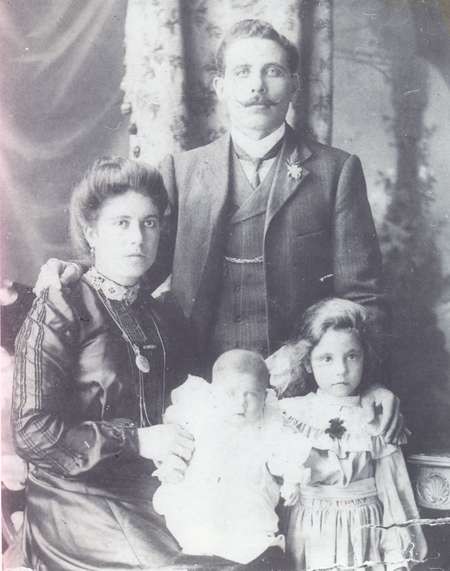 Agapi and George Lianos with Emmanuel and Stavroula.

During the next four years he had a series of good and bad experiences in business and family dealings, but he was finally doing well enough to bring his wife and child to join him. In November 1900 they were a united family again. They worked very hard in the latest business they had purchased which was very successful. Their first child to be born in Australia was Emmanuel born on 3rd January 1903. Their next child was Theodora born on 29th January 1905, and on 20th March 1907 another daughter Aspacia was born. He then made the decision to return to Greece and on the16th April 1907 left on the Orient Liner Ormes.
However Theodora became very ill and they had to disembark at Colombo, a decision which saved her life. They stayed there for fifteen days and continued on their journey on the Ortona, and arrived in Pireaus on the 7th June 1907, where they stayed for fifteen days and then travelled to their intended destination Agia Pelagia where they were greeted with great joy by his father and sisters. From there they travelled to their village Liananika and were greeted with great enthusiam by the villagers.

They spent the next few years (3yrs and 10mths to be exact) having a happy time. During this time another son Anthony was born on the 28th January 1908 and Papou built a beautiful home and furnished it with the best furniture which he bought from a shop in Pireaus owned by an in.law J.Venathis. The house was started on the 15th May and completed on the 28th November 1908. 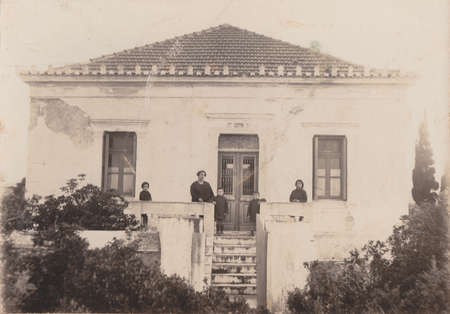 Unfortunately he was persuaded by some in-laws to lend them money for their business ventures and then refused to repay him. As he was not receiving the monies due to him from his investments in Australia from his in-laws whom he trusted, he was forced to return to Australia to investigate things. His intention was to return to Greece in a couple of years. So in October 1910, they left Cerigo (as it was called then) and arrived back in Australia on the 7th February 1911, and took over his shop from his brother-in-law Menas Comino and was shocked to see how little money there was for him. However he worked very hard and built the business up and started doing well again . During this time another son Menas, was born on the 1th April 1911 and business was really booming. But he was too trusting of his in-laws and was tricked by them once again and he had many business problems as a result of their actions. About this time another daughter Coralia was born on the 24th April 1913.

At the end of 1912, he intended to sell up everything and return to Greec but once again he was persuaded by his in-laws to do otherwise and made bad decisions which cost him dearly. He opened a lolly shop and milk bar in Elizabeth St. Sydney but again he had bad partners and lost a lot of money. Another son Theodore was born on the 13th December 1914.

Then war had started in Europe in 1914, and business plunged dramatically because the soldiers behaved like larrikins and refused to pay for food and drinks and threatened to smash the windows (which they did once) if he complained. It was a bad time for all shopkeepers. He then went into business at 661 George St,and it was from there that his first daughter Stella married John Aroney in the 1st August 1917, and the wedding reception was held at the George St business and the 100 guests sang and danced till 2.a.m. It was the first genuine Cerigotis wedding held in Australia. 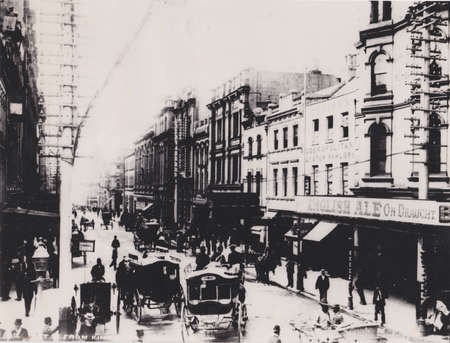 This a photograph of the Cosmopolitan Oyster Parlour in Pitt St, Sydney, owned by the Comino brothers and taken at the turn of the 20th Century.

Business was improving and his landlord then offered to sell him the shop and the one next door but the price was too high and he refused. It was then sold to a Theo Marks and when the current lease expired, his terms for a new lease were excessive and not worth while considering. But he had bills to pay, the wine licence and fittings being a few things to pay. His brother-in-law Menas told him that if he walked away from everything, because the bills were so small no one would chase him for it. But it was bad advice. With his wife and family and new son Socrates born on the 20th January 1918 they left Sydney for Murwillimbah where his daughter Stella and her husband John were in business and John offered him a small shop next door to theirs to open a business. But Theo Marks in Sydney did not walk away from monies owing to him and sent a summons to Murwillumbah. The severe flu epidemic had hit Australia and Papou was ill and unable to go to Sydney to defend the summons so he was declared bankrupt.

But things were no better in Murwillumbah as John Aroney had sold the small shop to help his brother return to Greece, and would not give Papou a larger share of his shop as compensation for the money he had put in renovating the smaller shop. They returned to Sydney and settled in Palmer St. Papou was out of work for five months and only Emanuel was working. He worked in Uncle Mena's and Uncle Nicholas' shop making five to ten gallons of ice cream every morning and serving in the restaurant at night. This helped to pay off the bankruptcy so that his father would not dip into the little money he had left.

Papou then opened a shop in Oxford St and fitted it out but it was not a success and he had to close it. And that was the last of his money. Another daughter Diamantoula was born on the 4th August 1920. Then in October 1921, they decided to go to Gunnedah and bought a broken down shop which he renovated completely as a milk bar. He put in a soda fountain and the business started to build up. It was there that great plans were made for the future and Papou thought he was on his way again at last.

But as the saying goes "Man proposes and God disposes" and so it was with my Grandfather.

Another son Constantine was born on the 4th October 1922. There were eleven children born to Agapi and George Lianos. 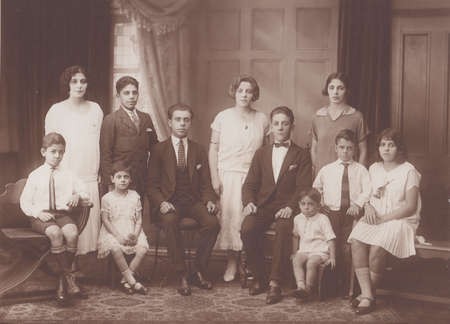 My grandfather in 1960, surrounded by his eleven children. 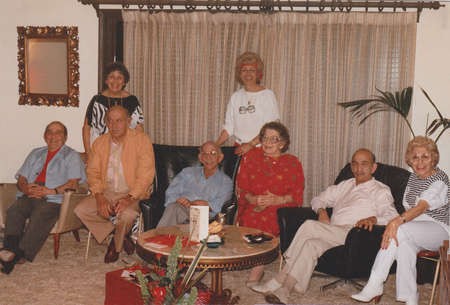 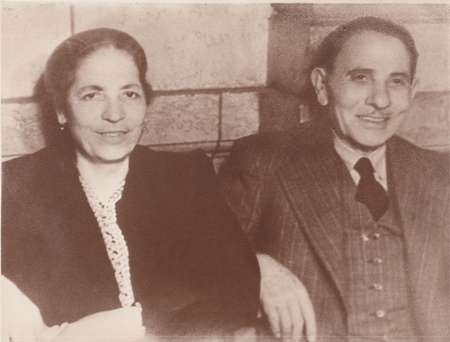 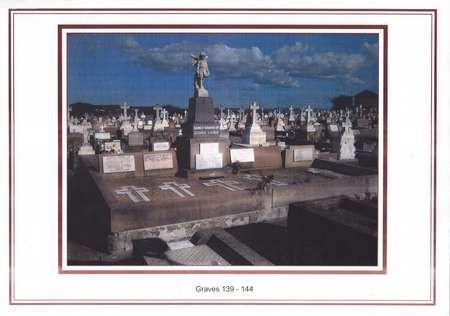