Two of us: Kristina Olsson and Peter Preneas 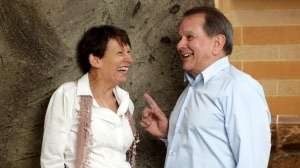 Website designer Peter Preneas, 66, was a baby when he was snatched by his father as his pregnant mother boarded a train in Cairns in 1950; they were finally reunited in Brisbane in 1985, when he was 35. His half-sister, author Kristina Olsson, 58, tells their story in the 2013 memoir Boy, Lost.

Kristina:
The day Peter arrived in Brisbane, my mother called us all and said, "Can you come over? There's someone I'd like you to meet." We all turned up and none of us was surprised about who it was.

We were all protective of our mother that night. Peter's then-wife, Kim, was with him and their little girl, Tamara. The whole family was there: [my half-sister] Sharon and her son John, me and my then husband and two children, my two younger brothers, and my father and my mother. So it was easy to diffuse some of the emotion.

We didn't know the story, we just knew he had been taken from her. Seeing Peter and Sharon sitting together, it was indisputable that they were siblings. I liked him straight off. I recognised my mother in him - her eyes and her smile - and it was safe.

Around 2006, six years after mum died, he applied for his records from DOCS. He was shocked. He called and said, "Krissy, you're the writer in the family, why don't you write about this?" He thought it'd be interesting to put something together about the polio he suffered as a boy and all those people who thought they had recovered but were now getting post-polio syndrome. Later I rang him and said, "Polio is a big part of your life but I don't think it's what affected you most; it was being stolen from your mother's arms." He didn't want to do that, but finally he came back and said okay.

We'd been casual friends until then but we had to spend a lot of time together. It was incredibly emotional. When I'm in Sydney I stay with him in Newtown; he's turned over one of his rooms to me. He says all the time, "Don't do that Krissy, you don't want to do that." He would have been a wonderful big brother to have. We're all much bigger human beings because he's the person he is.

Peter is incorrigible in many ways, but he has an extraordinarily big heart; he's incredibly generous. There's a survival mechanism in him. Polio does that to you but living on the streets, the terrible abuse at the hands of his father and as a ward of the state; he's still the little boy who had to get off at the right station, had to sleep under the right bush, had to pick the right people and sometimes didn't. I think he trusts me now, and the rest of his family, but there's still that wariness about parts of the world.

The first thing people ask me is, "How's Peter now?" I say he's wonderful, and the thing that amazes me is that he's come through as this decent human being.

Peter:
I first started looking for my mother and her family when I was six. I started running away from my father's home; he would catch me, I'd run away the next day. I can remember being at Central Station asking people if they knew how I could find my mother. If I hadn't found Mum, I'd be bitter, I'd be a different person. I probably felt sorry for myself for not having had that nurturing but I have no resentment towards my mother's later children, because all they have ever given me is love.

I like having little brothers and sisters. They naturally love me and accept me 100 per cent for all the stupid things I've done along the way that should have put them off. All I told them was the fun stuff.

I told them I used to renovate massage parlours and did a bit of travelling; the stuff you could brag about. I didn't tell about the dark stuff because I was ashamed of it.

When I was eight or nine, I was molested by some guy opposite Maitland Public School. And when I was 11, I was picked up in North Sydney and a man had five charges laid against him of sexual molesting. I didn't tell Krissy about this for the book. I was hungry on the streets; I didn't know what was going on.

I'd have liked to be around when Krissy was younger and going out with boys so I could belt 'em up. I missed out on all that. She mightn't have got married quite so quickly; I'd have warned her about 'em.

But she's got two beautiful children, so she would never regret her marriage.

Krissy is eccentric. Ring her and her message says: "I don't normally take calls so ring me back." She has a passion for writing - and can't she write! I said to her one day, "You don't make any money out of this writing. I can give you some stories." But she's not interested. I could give her a series on [Sydney brothel] A Touch of Class or the underworld.

I think the book took its toll on her. She'd come down to Sydney and we'd walk around Sydney Hospital, where I spent a couple of years. We walked around the Rocks, and I showed her where I used to sleep and a tree I slept inside under a Harbour Bridge pylon. When she was doing the final editing, she rang me up and started bawling her eyes out: "What happened to you Peter, it's all coming to me now." I was having a little cry, too, but she was beside herself because it all came crashing down.

Krissy brought us all closer together by writing the book. We all now know what Mum went through, what I went through, what we all missed out on. I just did a website for the family photos. I'm the custodian of 18 or 20 photo albums, so I'm scanning them and putting them on DVDs and I'll give a copy to all the kids. I'm catching up with what I missed out on.