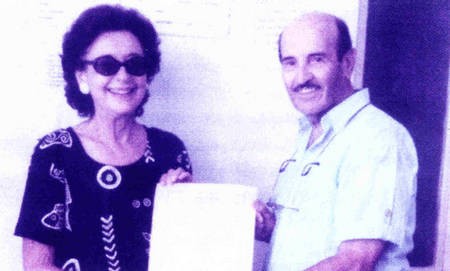 President Anastasia Condas accepts a philanthropic award on behalf of the Kytherian Society of California and the West for its many contributions to the Gerokomio of Kythera over the years. These donations have included a convection oven, dishwasher, clothes washer and dryer, an most recently, an electrocardiograph instrument.
From The Hellenic Herald, California, March, 2003.

The Anne we have all known and loved was a remarkable individual — one with unfathomed abilities and potential and who always strove to make her world a better place through the results of her numerous accomplishments. Her intellect and energy drove her to fulfill two of her passions--love of educating and love of Hellenism.

I have attempted here to give you a brief glimpse of her formative years and relate some of the experiences that influenced her to become such an extraordinary person.

Tasia was the second surviving daughter of John and Penelope (Venardou) Megaloeconomos. Papa was born in Potamos, left for western Pennsylvania as a boy, returned to fight for Greece during the Balkan wars, and then returned to America where he had been a businessman. During a subsequent visit to Kythera, he met and married Mama, a lovely young woman from Agia Anastasia. They quickly produced Chiysanthy, and then migrated as a family back to Pennsylvania where Papa operated a popular restaurant. Tasia, born in 1936, was a bright child, with a very creative mind—while playing with her dolls, she would create and relate spell-binding stories, the plots of which would rival those of J. R. R. Tolkien or J. K. Rowling. She was a voracious reader, and took several years of piano lessons. At church, she attended several years of Sunday School and of Greek School, profiting from the experience more than most of us.

Tasia was always industrious, working at various jobs from a very early age at eight years of age, she worked in our restaurant, setting the tables with napkins and flatware. Her first paying job was at the age of 12 when she worked at a koumbaros’ store, supervising the magazine section. This was followed in her teen years by a long tenure of employment at the public library, where she mixed business with pleasure—earning a wage while being immersed, literally and figuratively, in literature. 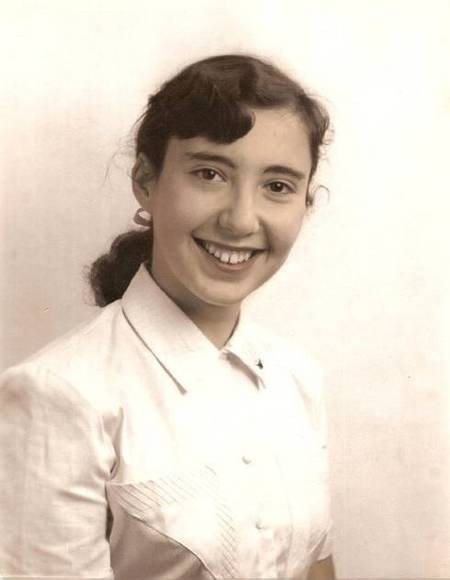 Tasia was always an honor student, having academic interests that ranged from the sciences to the humanities. She was very active in student affairs, participating simultaneously in several organizations and becoming the president of most of them. With her activities came popularily, with her crowning social achievement being the prom date of the #1 class dreamboat. This date was also a measure of her mettle—she defied Papa by her choice of a date—he was an exchange student from Germany, and Papa had had enough of Germans for a lifetime — Mama, however, was beginning to show her independence and liberal bias, with the end result being that Prom Night was a memorable one for the entire family.

Tasia’ s religious life began at birth with the exceptionally good fortune of having extraordinary godparents—they were our parents’ closest friends and served as surrogate parents to all of us until their passing several years ago. This relationship subsequently led Tasia to closely practice the customs and traditions of koumbari, and in the coming years baptized several individuals and so created lifelong ties with them.

Immediately after Tasia’s high school graduation, we moved to San Jose—Papa was retired and Mama had been hearing great things about California—the family left for California at different times that summer-- Mama, Tasia, and I set out in the family car— I was too young to drive, Mama got headaches after only an hour of driving, and so Tasia, with only several weeks of driving experience, drove us across the country six days on Highway 40. It was Tasia’ s mettle again.
Tasia enrolled at San Jose State College that autumn, seeking and earning a degree in Elementary Education, and needless to say, graduating magna cum laude. While at State, she was a Reader in both Science Education and in Byzantine History. The latter activity afforded her the first formal and intense exposure to the world of Hellenism under the invaluable and sustained mentoring of Professor E. P. Panagopoulos. This association developed into close lifetime friendships with Beata and E. P. Panagopoulos.

Tasia’s first direct exposure to some of the fundamental needs of humanity came during her sophomore and junior summers when she worked as a counselor at an Easter Seal camp. Here, she worked with physically, emotionally, and mentally challenged children—while emotionally draining, it served as her inspiration to follow a life of benevolence.

Tasia’ s college social life was predictably active—I would watch in awe as she balanced part-time jobs, studying and dating several fellows at once. Her heart was won, however, by a very cerebral UC graduate student who would come courting from Berkeley with a car borrowed from his father. Although charming and erudite, I believe George ultimately succeeded with Tasia because of his frequent gifts to her of licorice ice cream.

They married as Tasia was turning 23, and they set up housekeeping in Hayward where she began to teach in an elementary school. Tasia’s auspicious beginning as a teacher evolved, after a several-year hiatus to give birth to and raise Diana and Penelope, into the area of secondary education, and the earning of a Master’s degree in Education. This degree led to a specialization in reading and her use of innovative reading techniques earned Tasia an excellent reputation in this field. Her marriage to George and association with his friends and later with the acquisition of others brought her life further intellectual depth and complexity—through these ties, for example, Teddi and Tikey
Zes and Herta and Ted Bogdanos and years later Effie and Stephen Miller became koumbari.

Tasia’s love affair with Kythera began in 1960 when she and George went to Greece for the first time. Here she met numerous direct relatives, and most importantly, met and immediately created a strong connection with Giagia, our maternal grandmother. Tasia took numerous trips in the succeeding years, the travel ultimately becoming an annual ritual. Her growing knowledge and understanding of both Greece and Kythera in particular, led her to become somewhat of an expert in the literature, history, geography, and culture of the region, and her fluency in the Greek language, written and spoken, became flawless.

One of Tasia’s joys was to expose others to the Hellenic experience whether by lecture or by tour—I would accuse her of being a masochist when she would take unappreciative teenaged family members with her on her annual jaunts—usually both parties would return and independently grumble about the ordeal, only to have the experience greatly appreciated by both in later years.

Among Tasia’s hallmarks is that she was a both a leader and a doer—when she had a vision she would immediately create goals and priorities to fulfill that vision, and would then accomplish them doggedly and in a timely manner. She would usually entice or cajole others to help achieve success in these endeavors, and when that help proved inadequate, she would do it alone. Her vision for a successful and vibrant Kytherian Society is one of her legacies. She needed our help, and having known her the way I do, I’m sure she is watching and waiting for our response.