- and “The Golden Cross of St Andrew”

This article was written for "The Kytherian" (February 2002) and is reprinted with the permission of the editor.

Humility, hard work and the absence of a search for glory are ideas that come to my mind when I think of the Greek men of our older generation. These men appear to set about tackling life without apparent effort and without petty complaint, always maintaining decorum and the gentlemanly behaviour typical of their generation. It is with these thoughts that I write about my father-in-law, Con Malanos, the elder of the two sons of Nicholas Malanos and Calliope (née Comino), who settled in Mackay Queensland, after leaving Kythera. He has maintained a life of high morals, hard work and a strong, family commitment. Married to Nina (née Fardouly, originally from Coolah), they have five sons and six grandchildren, two of whom have been christened Constantine, after their ‘poulli’ (short for papoulli -papoulli).

He is a scholarly man with a fine wit and a very dry sense of humour - perhaps there is time for some work in comedy.

My father-in-law approached us in mid November and invited us to a dinner on 26th November, 2001, at which he said he would be presented with a small award. No fan-fare, no exaggeration, a simple request. We of course accepted his invitation, perhaps not paying adequate attention to the reason for the invitation; suffice it to say that if he wanted us there, we would be there. Being the sort of man he is, he would never insist on our presence or consider wasting our time unless the cause indeed had some significance.

Arriving at Archbishop Stylianos’ Name Day dinner, (a function that I have not previously attended but which we thoroughly enjoyed), I was astounded at the number of people present – clergy, politicians, business people, locals, overseas guests, everyday citizens. It is at this dinner that the Archbishop proudly presents “The Golden Cross of St Andrew”, a tribute presented specifically by the Archbishop to one or more individuals, for outstanding service to the community over a period of time.

The recipients of this prestigious award were Socrates Socratous, for assisting in the St Spyridon Church at Kingsford; Peter Theofilou for service to the St Euphemia Church at Bankstown; and to Constantine Malanos, for his ongoing commitment to St Basil’s Homes, where he has been Chairman of the Board for the last sixteen years.

These three men were honoured and acknowledged for their tireless work towards their respective community commitments. These three men fit the mould, which I previously described. Unassuming, unpretentious and uncomplicated, they do the job that has to be done, seeking no glory and achieving the required results.

It was therefore delightful to see that their toils were rewarded and as expected, each of these gentlemen received their respective honour, humbly. Furthermore, I write with certainty, that each of these gentlemen will continue to serve their chosen cause, quietly, honourably and extremely capably. These are the role models we require for the following generations to emulate – keep up the great work gentlemen!

Con Malanos. Constantly striving to improve the Aged Care needs of Kytherians and Hellenes in Australia. 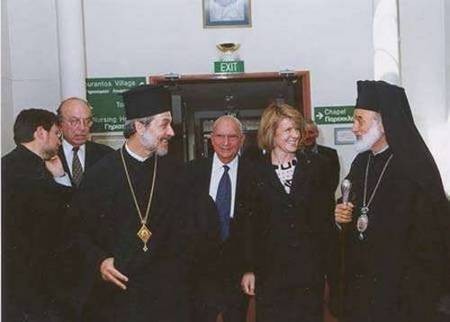 Medal of the Order of Australia (OAM) in the General Division

On the 13th June 2005, in delivering
THE QUEEN’S BIRTHDAY 2005 HONOURS,
The Governor-General of Australia was pleased to announce the following appointment and award:

For service to the community with the citation "For service to the Greek Community in Australia, particularly through St Basil's Homes for the Aged, and the Australian Hellenic Education Progressive Association, and to education".