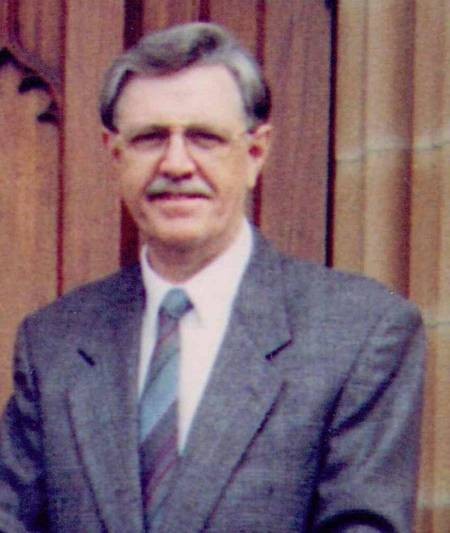 Kevin Cork, in April 1997, at his son Stuart's graduation.

Conserver of the Hellenic and Kytherian Cinema Heritage in Australia.

[A very special thank you to Merle, Julie and Stuart Cork, for providing the biographical detail of Kevin's life that ensures.]

Kevin’s love of theatre began as a young boy attending his local theatre, Haberfield Elite. In the early 1960s he commenced photographing theatres and amassed an extensive collection.

Kevin was married to Merle, and had two children, Stuart and Julie. His life was unfortunately cut short by a sudden heart attack. He began his career as a Secondary English teacher and progressed to a Senior Studies Coordinator. His interest in theatre was also demonstrated by his production of plays and musicals with his students.

He was a talented musician. To pay his way through university, Kevin performed professionally with his parents as a drummer and later as an organist for wedding receptions. He contributed enthusiastically to the services at St Peter’s Anglican Church, Seven Hills, by playing organ for many years.

Kevin discovered that there were many others who shared his passion for theatres and he served as both President and Secretary for this society for a number of years.

Many hours of Kevin’s life were spent in researching the history of theatres and cinemas. His desire was to share this information with others and much of the information has been recorded in his books.

The Dream Palaces: co-authored with Les Tod
Part One: The Atmospherics 1988
Part Two: The Spanish Influence 1989

“Front Stalls or Back?” The History and Heritage of the Newcastle Theatres: co-authored with Les Tod 1993

For All the Kings Men (The Kings Theatres of Sydney, NSW) co-authored with Ross Thorne 1994

Twenty-Four Miles Around Nelungaloo (The history and importance of cinema exhibition in pre-television times to a country area of central-western New South Wales)
Master of Arts (Hons) Thesis, University of Western Sydney, 1994

His untimely death caused his Ph.D thesis, to remain unfinished. However, due to the generosity of his family, chapters of the thesis have been reproduced at www.kythera-family.net. [See, Photography Diaspora, subsection, Cafes, Shops and Cinemas: or use the internal search engine on the site under Cork].

Kevin's Ph.D thesis sought to explore the history and impact of Greek Cinema operators and owners in New South Wales, in the period before the advent of television. During the research process Kevin spent endless hours tracking down leads and information, and contacting Greek, mainly Kytherian cinema owners, and their descendants.

Numerous contacts were made with Kytherians at this time. Andy Coroneo, (former Woolhara Travel Agent, ('O Psomas)) recalls: I remember Kevin Cork phoning me about eight years ago, seeking to make an appointment explaining his thesis subject. Of course, I was delighted to meet him. He came to my office and showed some of his original research which was astonishingly wide and deep. He knew of some matters relating to my father's career that I did not know myself. I submitted an oral history of my father's various theatres, most of which he co-owned and operated with his brother in-law Peter Charles Sourry which he noted on several occasions. He cleverly challenged me to find the principal of the Hellenic Cinema Company Pty. Ltd. at a certain address in Oxford Street, Bondi Junction, and I enjoyed solving this problem for him, especially when it was established that the address was of an old retail butcher's shop!"

[If other Kytherians have memories of their interaction with Kevin Cork, please post them to the web-site.]

In all, the lives of 66 Greek-Australian Cinema exhibitors were explored in depth.

By an enormous effort, what Kevin Cork achieved was to chronicle and preserve a part of the Kytherian heritage in a very substantial way, that would otherwise have been lost to future generations.

Kevin Corks importance to Kythera and to the Kytherian heritage in summed up in the final three paragraphs of Chapt 10, which has been published at the kythera-family web-site [See Photography Diaspora, sub-section Cafes, Shops and Cinemas.]

"How then are the 66 Greek-Australian exhibitors to be remembered? As previously stated, most of them are deceased and although obituaries speak of being 'highly-regarded', 'well-respected', these are nothing more than pieces of paper filed in libraries. Archival material, such as Alien Registration Forms, tells little more than dates and places, and certainly not about the men and their achievements. There is the strong possibility that the ten former exhibitors who are still alive today will not be by the year 2017 - a mere twenty years away. As the population grows older, their contributions made to our social and architectural history will be forgotten. Country town populations constantly change so we cannot rely on people's memories.

These Greeks who dared to migrate, open businesses, become successful (remember "success" is a relative term), who entertained millions - how will we remember them? Their families will. For one or two generations their memories will be clear. After that, it is impossible to predict. During the course of researching, it was found that the children of these exhibitors have left the refreshment room trade far behind, if they were ever involved in it at all. Many of the children of the former exhibitors are professional people - doctors, optometrists, solicitors, accountants, company directors, teachers, business men and women. While they take an interest in their parents' origins and careers, their generation will fail to pass on the material to the next simply because we are not a nation of story-tellers. We do not pass on our histories by word-of-mouth. It has not been uncommon for a child of a former exhibitor to say, with regret, that they did not ask sufficient questions while their parents were alive. The writer, himself, has similar regrets. We are part of the age of the written word with visual accompaniment. Few of the children interviewed for this project have bothered to write down about their fathers. In some cases, it was only through the intercession of the writer that this was done. In a similar way, it has been noticed that, frequently, when photographs have been loaned to the writer for this project, nothing has been written on the backs of them, thus rendering them useless for the next generation.

If we are to remember these Hellenes for their contributions to Australia's social, architectural and technological advancement, then it is imperative that there be Greek landmarks which are acknowledged at local and state level - ones that point to the achievements of the Greek-Australian cinema exhibitors who are the subject of this thesis. We cannot allow their histories to be forgotten, not when they provided services that positively affected millions of people, firstly, through their refreshment rooms and, secondly, through their picture theatres."

These last 3 paragraphs are virtually - a reiteration of the mission statement of the kythera-family website!


Kevin's second major achievement, was to point to the need, and to create a climate amongst important bodies concerned with Heritage issues in Australia, to preserve and restore as many of Australia's cinema's as possible.

This "climate" resulted in the restoration of many theatres.

a cinema alert from the National Trust, as an indication as to how seriously this important Organisation regards the preservation of cinema's in Australia.

Kevin was a pioneer in creating the cinema heritage "climate".

More than 20 years ago, he was co-author of the following submission to the Heritage Office (NSW) and the Australian Heritage Commission:

Twenty-four miles around Nelungaloo:the history and importance of cinema exhibition in pre-television times to a country area of central-western New South Wales,

at the conclusion of which he made the

"....recommendation that one of the venues discovered during the course of research should be investigated for heritage listing. It is important that we should acknowledge the vital part that going to the pictures once played in pre-television days, especially in rural areas."

The purpose of this study, carried out during 1995 and 1996, was to compile a register of picture theatres in the state of New South Wales for the Department of Planning, Heritage Branch (now The Heritage Office). The register, was the first of its kind in Australia in the hundred years since motion pictures started.

Kevin and his co-author's were appalled that many cinema's - often unecessarily - had been demolished.

They identified 6 cinema's in particular that had to be preserved or restored. They also felt that these "...buildings (were) worthy of acknowledgment as memorials to Greek-Australian exhibitors" and that they should "..serve as landmarks for the descendants of those Hellenes."

By Oct 2004, two important theatres with a powerful Kytherian heritage have been featured in this section of the kythera-family web-site, in multiple entries, independently of Kevin Cork's thesis. They are the Roxy at Bingara, and the Saraton at Grafton. The history of all 6 theatres can be researched on the site by exploring the Cork thesis entries.

For conserving a Kytherian cinematic heritage, and Kytherian theatres in which this heritage was created - Kytherians owe Kevin Cork a sincere debt of gratitude.